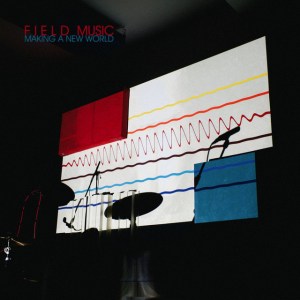 Field Music return with Making A New World, an epic nineteen track album that follows on from 2018’s Open Here.

The seventh long player from Wearside’s Brewis brothers and Co. is a politically prescient collection of tracks inspired by playing a pair of shows at the Imperial War Museum in Salford and London.

Perhaps best known for angular art-pop, Field Music have turned their gaze to the human condition and impact on culture following the end of World War One.

To the short of attention music consumer of 2019, nineteen songs on an album might sound like a drag, but there is not an unimportant note or irrelevant beat in a fast paced 42 minutes of thoughtfully creative outpouring.

The record pieces instrumental snippets together with three minute songs. This brings a humbly majestic flow to proceedings, with each part given space to breathe and own its segment of the whole.

Opening with instrumentals, ‘Sound Raging’ and ‘Silence’ introduce the concept of conflict and abrupt closure, before introducing ‘Coffee or Wine’, the first ‘song’ of the record.

As the album grows, you can imagine Field Music surrounded by Imperial War Museum exhibits and paraphernalia: they’re absorbing the images, artefacts, vocabulary and videos around them and extracting samples to express emotions and perspective later on.

The bass part three minutes into ‘Between Nations’ exemplifies this – it feels like a moment stolen from a photograph, interpreted and re-communicated in nickel via an amplifier. It’s beautiful: isolated, secure but intrepid.

The variety of instrumentation as the record progresses makes for vibrant listening. Delicate flourishes in ‘From a Dream, Into My Arms’ disappear behind lower warm embracing tones in ‘Beyond That of Courtesy’ – it’s the contrasts on this record that make it so compelling.

‘A Common Language Pt 1’ deploys familiar keyboard tones antithetical to the compositions around it and sounds practically space age to the rest of the record. The repeated guitar arpeggio in ‘Nikon Pt 1’ is particularly heartfelt and demonstrates how a simple melody, delivered to the right tempo and in moderation, can say more than any lyric.

Making A New World is a wonderfully constructed album. It’s subtly uplifting. This is not an angry, romantic or wistful collection of songs; this undertaking could have produced something clichéd. It comes together to probe the effects on relationships between people through nationality, language, gender and situational adaptability. The pacing comes as a surprise; nineteen tracks genuinely race past, adding to its attraction.

Field Music are touring in the UK until the end of February. Pick up tickets for a mix of intimate in-stores and full shows from their website.

Making A New World is out now on Memphis Industries.