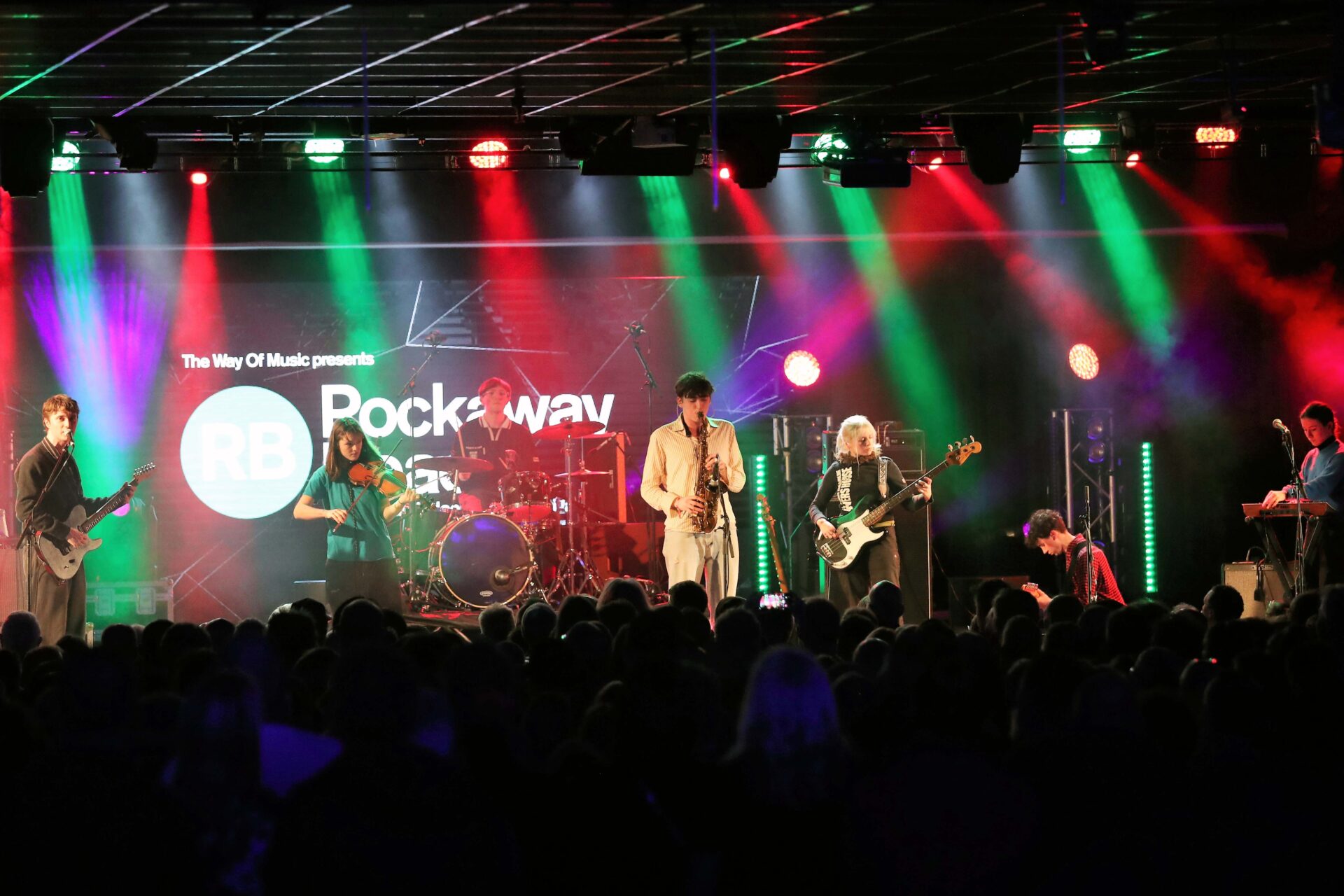 John Cale and British holiday camp festivals were last mentioned in the same breath almost four years ago. On that occasion in April of 2016 the founding member of one of the most influential rock bands of all time was scheduled to perform at two All Tomorrow’s Parties (ATP) 2.0 weekender events at Pontin’s Prestatyn Sands holiday park. But as ATP went into yet further financial meltdown and teetered on the verge of what would very shortly be total collapse, Cale pulled out of both shows stating that “the organisers let us down”.

It is therefore to Rockaway Beach’s great credit and something of a major coup for the festival in its relatively short five year history that it has managed to entice the Welsh musical pioneer and multi-instrumentalist back to the intimate surroundings of a holiday camp in a British seaside resort. 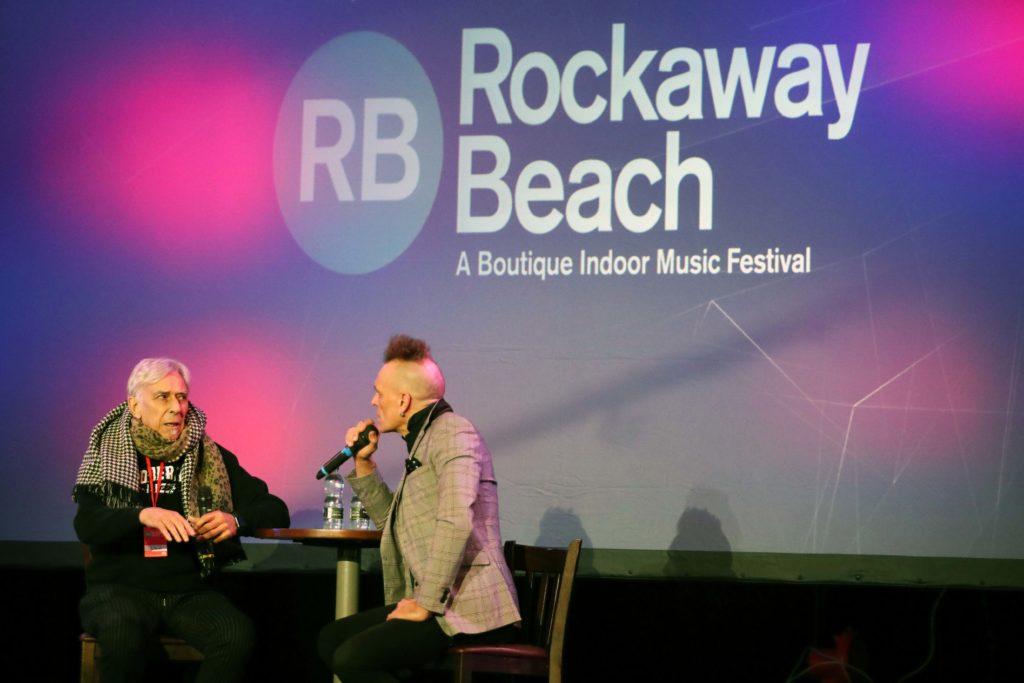 It is sometimes said that Rockaway Beach has filled the void left by ATP in the UK festival market. Both take/took place at out-of-season seaside locations in this country and put on exciting line-ups that balance more established acts with those who are still flying under the musical radar. Both appeal/appealed to fans of more alternative and often marginal music who prefer the comforts of a warm chalet to the potential vagaries of sleeping in a tent in a muddy field. And then there are the degrees of separation between fans and artists – many of whom also stay on site over the weekend – which are dramatically reduced at these events.

But in many respects there the similarities end. Whereas ATP ultimately became a byword for administrative chaos, acute financial mismanagement and general unpredictability, Rockaway Beach in marked contrast is wonderfully well organised and operates with a natural precision in what are consistently safe and welcoming surroundings.

The schedule of live music is set up in such a way that no two acts ever overlap and plenty time is still left for you to enjoy a whole variety of other entertainment including artist Q&As – this year these are with the weekend’s principal headliners, John Cale himself, Jim Reid of The Jesus and Mary Chain, and two members of Fontaines D.C. – record signings, pub quizzes, DJ sets, late night parties, album playbacks and meet-ups, not to mention the chance to take advantage of more traditional holiday camp fun with access to Butlin’s brand spanking new family pool, ten pin bowling, arcade games, darts and pool.

Signalling problems at Horsham and consequent rail delays put paid to our Friday afternoon, but surely the day was always going to belong to John Cale. Speaking to John Robb on the Skyline Pavilion stage earlier in the evening, the mercurial musician who at his own word “is driven by anger” is clearly in a good place as he recalls fondly his early life in New York having arrived there as a 21 year old from the Welsh valleys more than half a century ago. We hear about his first meetings with Andy Warhol, Lou Reed, Nico and the evolution of The Velvet Underground alongside kindred spirits who had absolutely no respect for creative boundaries. 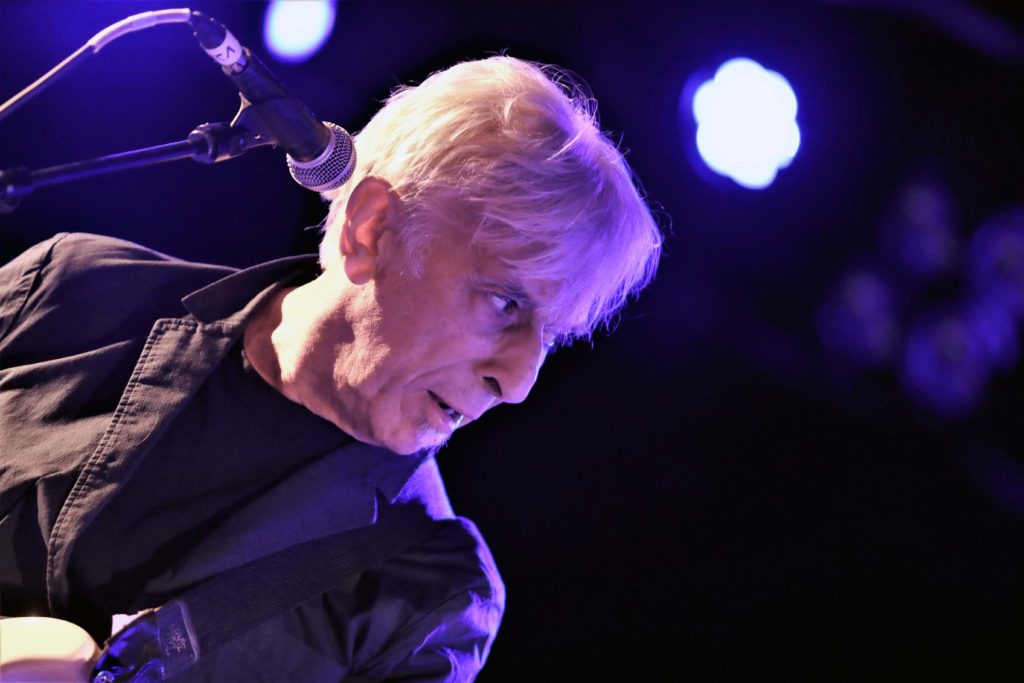 This acute sense of continual innovation has not been diminished by age and John Cale’s performance later that night is one of often stunning exploration and adventure. The opening ‘Helen of Troy’ is relentless and his later interpretation of the Velvets’ ‘I’m Waiting For The Man’ is as terrifying as it is potent.

Prior to John Cale, though, and in reflecting the organisers’ creative approach to programming and their desire to strike a healthy balance between established and emerging acts we get Black Country, New Road. The seven-piece London-based band share Cale’s vision for immediacy and versatility as they wend their way through a set that captures melody and possibility in equal and startling measure.

In between John Cale and Black Country, New Road, the Derry performer SOAK confirms her transformation from indie-folk singer-songwriter to fully-fledged artist. An ominous railway platform announcement complete with its concluding, conflicting message – “Refreshments will not be available on this service. Thank you and enjoy your journey” – heralds Bridie Monds-Watson (she who is SOAK) and her band onto the stage. Monds-Watson proceeds to break down barriers through her music, blessed with personality, spirit and a well-developed sense of interior meaning. ‘Crying Your Eyes Out’ releases a huge, huge swell of undeniable emotion. 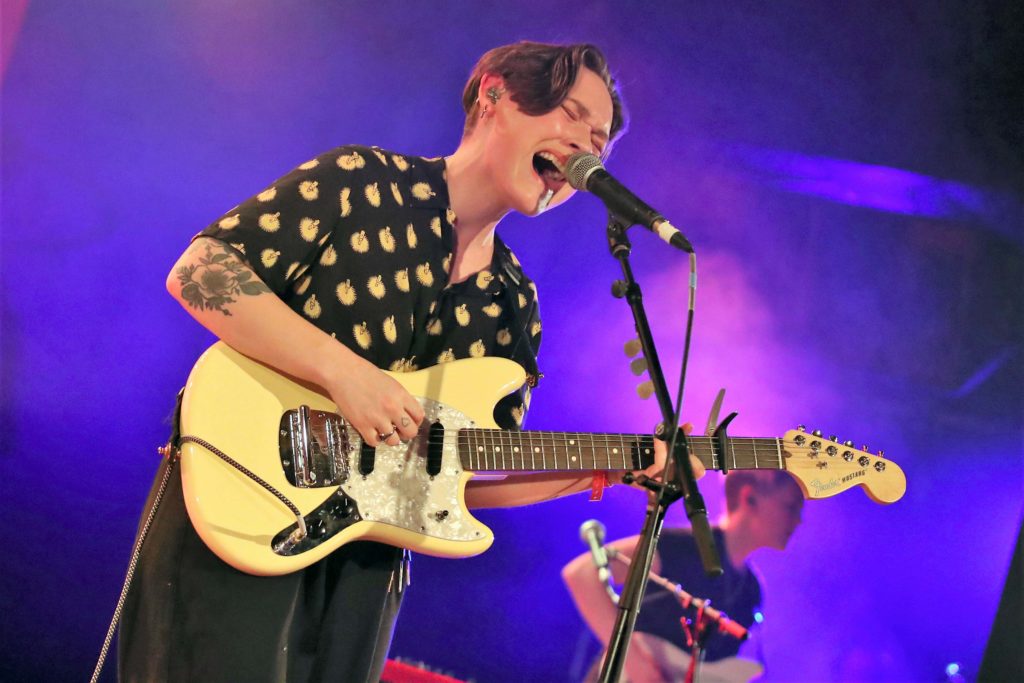 Saturday begins in Reds at midday with West Bromwich’s The Pagans S.O.H. – complete with tons of energy, a guitarist in a Baggies’ top, and some really top tunes that merge hip-hop, funk and punk – and ends next door in Centre Stage more than 14 hours later with the BBC Radio 6 Music DJ Steve Lamacq spinning the discs.

In between those major staging posts the entertainment is many and varied. Scrounge is Lucy and Luke and they are good. Together the guitarist and drummer kick up a feral storm, replete with proto-punk riffs and no little attitude besides. Penelope Isles go from strength to strength. Since first seeing them last summer at Deer Shed Festival, the four-piece from just along the coast here at Brighton have further developed their sound and stagecraft to a point whereby Lily Wolter follows the earlier trajectory of an inflatable shark and surfs backwards on the upstretched arms of the crowd whilst still playing her bass guitar. The large throng assembled outside the Pie and Vinyl music stand’s signing-point after their show confirms their growing popularity.

All the way down from Glasgow, the lead singer of Racalton then offers the audience some helpful guidance. “See who you want to see and drink as much beer as you can.” Plenty seem very willing to heed his sage advice but for any amount of alcohol that may be consumed over the weekend there is never any hint of trouble in what is a refreshingly inclusive environment.

Two further artist Q&As serve as the bridge between afternoon and evening on Saturday. The first sees Peter Perrett in conversation with John Robb. The former frontman of The Only Ones reminisces about his previously dissolute lifestyle, one which involved the long-standing ingestion of industrial supplies of narcotics. That he is still here to tell the tale seems to be nothing short of a miracle of modern science.

Another man who has been no stranger to past drugs and debauchery is Jim Reid. Here he recalls consuming shed loads of amphetamines in the early ‘80s in the company of, amongst others, the former Jesus and Mary Chain drummer Bobby Gillespie and together wrecking empty industrial units in his hometown of East Kilbride. In what was one of the absolute highlights of the entire weekend he also concedes in his compelling conversation with John Robb that “drugs and drink eventually took the place of inspiration.” Jim Reid has now been sober for more than three years. 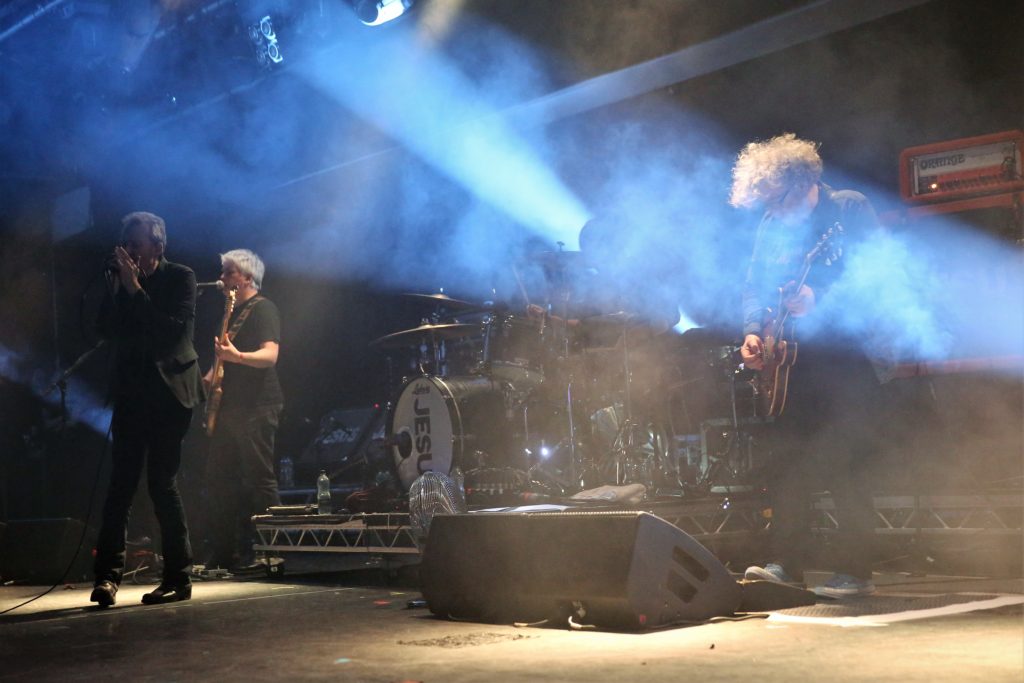 Following his Q&A, Jim Reid joined his brother William in the nearby Pavilion Studio for a signing session. In what would surely have been totally unimaginable back in 1984 when The Jesus and Mary Chain first hit the scene in an uncompromising squall of feedback and confrontational menace, droves of fans clutching various pieces of JAMC memorabilia then queued up to meet the Reid siblings and pose with them for photographs. In every shot I have seen since, William and Jim are sat impassively behind a table without even the slightest hint of a smile crossing their faces whilst a sequence of shamelessly over-excited middle-aged men and women, amongst whose number I will gladly count myself, stand behind them grinning maniacally.

Later that night The Jesus and Mary Chain oblige us with a masterful demonstration of how best to marry dark Phil Spector pop with majestic nihilism. The Reids then disappear to their respective homes in Sidmouth, Devon and Los Angeles, California with a life-affirming blast of ‘I Hate Rock’n’Roll’.

Earlier, though, the march of time and any cause for celebration the occasion of his 50th wedding anniversary may have brought to Peter Perrett seems to have just passed him by. He fails to move out of second gear until concluding his set with an inspired reading of The Velvet Underground’s ‘What Goes On’.

On Sunday we awake to one of those wonderfully bright winter’s days and a walk along the Bognor seafront is not only bracing but clears the head for what lies ahead. The music of Adwaith embodies those feelings of liberation and joy. The three-piece from Carmarthen and proud winners of last year’s Welsh Music prize for their album Melyn are a delight, their effervescent songs inspiring waves of optimism in the listener. Their fellow country people Melys later divest a similarly feel-good sensation and it is little wonder that the late, great John Peel had their 2001 single ‘Chinese Whispers’ – which they play here, of course – as part of his annual Festive 50 playlist. 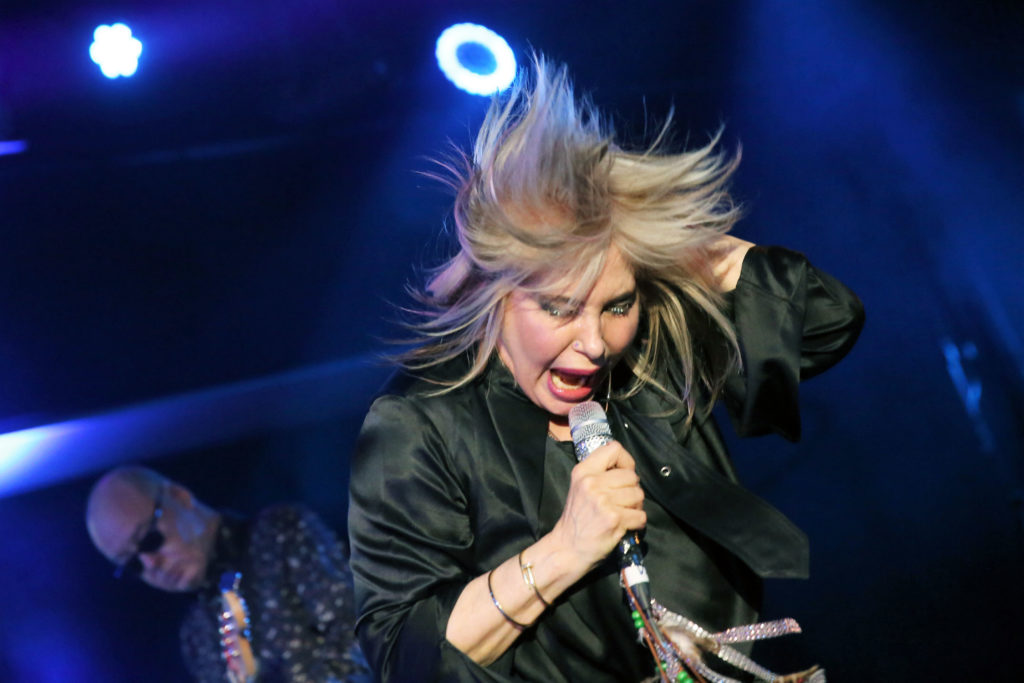 Brix & the Extricated light the touchpaper to Sunday night with an exhilarating set in which their own songs stand admirably four-square with those of The Fall with which they are most often associated. Frontwoman Brix Smith Start is a blur of perpetual motion and even introduces into her performance some pretty impressive Elvis Presley martial arts’ moves and a quasi-Bowie/Ronson simulation with guitarist Steve Trafford. They conclude with ‘Totally Wired’, each band member departing the stage in turn before leaving just bassist Steve Hanley and drummer Eliot Barlow (standing in for regular sticksman Paul Hanley) to bang out the song’s thunderous groove.

David Gedge is clearly thrilled to be performing on the same stage occupied just half an hour earlier by “the greatest bass player of all time”. He follows this observation by then playing ‘Rachel’, “the greatest pop record that you will hear all weekend’. It is not perhaps such an idle boast either.

It is then left to Fontaines D.C. to bring Rockaway Beach’s live music schedule to a close for 2020. The responsibility does not seem to weigh too heavily on their young shoulders as they launch straight into ‘Hurricane Laughter’ with fierce, uninhibited intent. Such is the force being generated from the five Irishmen the sprung floor in front of Centre Stage is quite literally bouncing up and down. With the notable exception of ‘Dublin City Sky’ – a powerful exercise in melancholic reflection, astutely placed second from last in a 13 song set – their tunes are wild, rip-roaring beasts unleashing wonderfully good-natured mayhem within the crowd. It is a perfect end to a fantastic weekend. 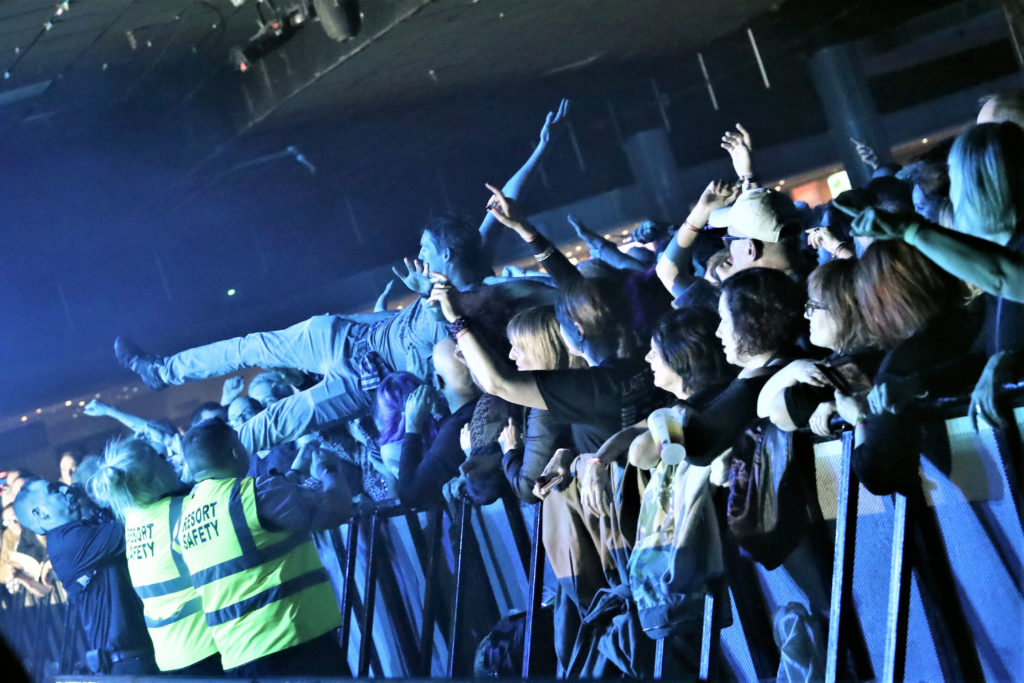