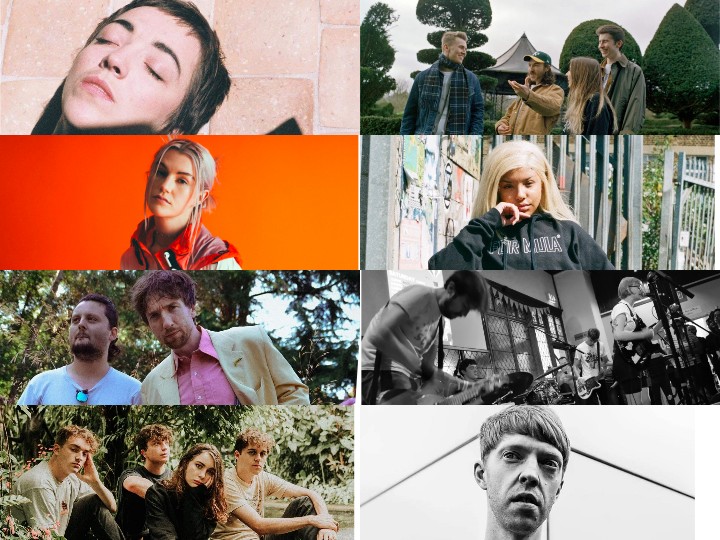 Rising Welsh stars Melin Melyn lend a charming and artful whimsy to their psych smothered tunes that spiral past your nose like a multicoloured rainbow. Based in Cardiff and led by front man Gruff who is flanked by Will Barratt, Cai Dyfan and Garmon Rhys.

With almost surreal almost kids telly style lyrics and toe-tapping hooks punctuated by harmonic interludes, bountiful brass, ‘The Big Society’ sounds like the meeting point between early Roxy Music and Super Furries. While recent single ‘Mwdryn’ is an absolute belter merging quick fire riffs and quirky melodic charm of early Squeeze or Syd Barret, as they flip through the fake news and politicians talking nonsense. They are joined by Dylan Morgan from Boy Azooga playing a Nord keyboard and Tom Rees from Buzzard Buzzard Buzzard produced and plays the cowbell on the track.

Their show at Swn Festival at the end of October was a real highlight their sax smothered tunes casting you under their spell before they unleashed a riotous Madness /Specials inspired encore. With a Focus Wales slot confirmed for May and more songs in the works, Melin Melyn bring a smile to the face and carry a suitcase crammed full of insiduous tunes with hidden meanings, a bit like Mr Ben. (Bill Cummings)

twst, is the project of songwriter, vocalist and producer Chloé Davis, her two outstanding debut singles today— ‘Girl On Your TV,‘ and ‘Always’ released at the end of last year and her recent release ‘sad girls club but u gotta be cute’ show her to be an exciting purveyor of dystopic glitch pop. With elements of the technology obsessed electro-pop reassemble of SOPHIE and the futuristic tapestry of Grimes, her songs tap into themes of how to navigate the online and social media as a young person she says songwriting “is how I deal with the emotional challenges that presents,” each of her songs is a vignette that speaks to a distrust of technology and tapping into a hyperreality world of Black Mirror with pop songs.

The singles are the first music to be released from twst. They were recorded in her bedroom and self-produced, and mixed by Rob Kinelski (Billie Eilish, King Princess, Alice Merton, Alessia Cara).

Born and raised in Barry, Wales, twst grew up working in her father’s chicken factory. After leaving home at 14, she left formal education and became something of a recluse, relocating to a recording studio in the South Wales Valleys. Now based in London, twst writes, produces and directs all of her music and videos, mostly within the four walls of her bedroom. The ghost in the machine Siri inspired “Always” is haunting while the awesome ‘Girl on TV’ is an exquisite pop song. Lilting from torchy introspective into belching electronic syncopation and synths, as her couplets embody the world of camgirls and how the imagery can create an unreal twisted version of love for the viewer.

It’s not strictly speaking a debut, but Oh Peas! long-rumoured first album as a full band should be with us sometime in 2020. Recent live shows have seen Rosie Smith’s discordant sad-pop undergo a joyful and unexpected renaissance. With a DIY ethos and a set of songs that howl at the world in incomprehension, Smith’s lyrics are a turmoil of absurdity and emotion. But underneath all the quirky seething there’s intelligence and warmth, a sense that the real treasure was the friends we made along the way. An outsider who’s finally found her gang, Oh Peas! are easily capable of dropping one of the year’s most essential slices of indie-pop. (Colin Bond)

19-year-old rapper Juice Menace has forged a reputation with three strong tracks and a series of shows over the last two years, as she travels back and forth from her hometown of Cardiff to London. With these, she has collaborated with some big name producer’s including Flyo, SOS, Elevated, Nastylgia and Michelin Shin.

Her gritty and excellent new single ‘Bounterfeit’ is laced with Menace’s vicious yet playful flow and underpinned by an incendiary piano and heavy trap beat she put together with Jaime La Cree. On the evidence of what she has produced so far, Juice Menace is a force to be reckoned with.(

Dylan Hughes ex of Race Horses / Radio Luxembourg reappeared somewhat unexpectedly in the spring of 2019 with new project Ynys (Island) courtesy of dreamy debut sun-kissed single Caneuon followed by the eerie, enchanting Mae’n Hawdd weeks later, both released via Libertino Records. These sweetly nostalgic, psych-glazed pop beauties bagged Ynys not only a triumphant Marc Riley 6 Music session but a tour of the UK hitting the key markers of Manchester, Glasgow and London, plus appearances at Green Man, Swn, and Other Voices festivals.

Ynys is nominated in the forthcoming Y Selar Awards for Best Song, Video and New Artist and with FOCUS Wales already booked for May, 2020 brings the promise of even more wonders. There are fresh recordings to look forward to and along with Hughes’ policy of providing English translations to his lyrics and so inviting more non-Welsh speakers along to the party, the next twelve months will see the expanding of more horizons still as part of the INES Showcase Festival Network talent programme taking the project to pastures newer. (Cath Holland)

His debut album released at the tail end of last year is a riot of noise pop in all its shades, from kick ass Husker du-esque rockers like ‘Mountain Man‘ to more idiosyncratic numbers like ‘The Party’. Laid back and artful like Mac Demarco meeting Roxy Music for a jam your back room. Candidly uncool and flagrantly honest, this tale of party privilege catches you unawares with its blend of choppy rhythms and dexterous baselines. The vocal drags the listener through the trials of the woefully ignorant at university house parties. Super cool. TJ Roberts promises a follow-up will follow swiftly. We cannot wait.

Forming at the University of South Wales in Cardiff Clwb Fuzz are a young quartet whose name is on the lips of many local music fans, marked as one of those with a chance to cross over the borders. Chunky, scorched and bar chord laden, ‘Samurai‘ shows an artfulness of melody and melodic edge. These youngsters eschew the obvious influences, with the initially brooding then hollered boy/girl vocals from Joe and Emily, sea-sawing between the shivering percussion and cavernous sound. They throw in several hundred extra fuzz pedal riffs in for good measure in the caustic outro. With hints of Pixies and Sonic Youth. They released a second single entitled ‘High‘ in October, a loud Sabbath influenced blast that confirms that even at this nascent stage Clwb Fuzz are very formidable indeed.

Rosehip Teahouse were formed by Faye Rogers (Guitar & Vocals) back in 2015 and after playing only a small number of house shows and local gigs, Rogers crafted these subtle and delicate songs, which command your attention, from start to finish.

Recorded DIY style, using any means possible, Rogers was later joined by friend Will Dickins (Drums), who
heard these tracks, and was in awe immediately. The two began to create music to soothe the soul, and since the early Bandcamp singles, have formed a densely layered, full band with Anthony Williams, Josh Dickins and Teddy Hunter playing several intimate shows in and around Cardiff.

Their debut single ‘Same Sky’ captured our hearts last year whilst their set at Wales Goes Pop set hearts aflutter with the yearning of the Sundays. ‘You know I love your ankles as much as your face/but you’ll find someone else’s eyes to care about‘ is on the face of it a slightly unusual proclamation, yet set to this gleaming wistful indie-pop gem, that encapsulates like gazing longingly into your crush’s eyes, it’s a swooning delight. A catchy paean to unrequited love, ‘Same Sky‘ makes you feel as snug as being wrapped in a blanket next to a roaring fire, it’s a soundtrack for hopeless romantics everywhere.

There’s a subtlety to these bars, glistening guitars, clipped drums, balancing shiny indie-pop of Sarah records against the more nuanced influence of recent American songwriters. While Faye Rogers’ delicate, bittersweet yet wondrous vocals and an effortless knack for melody and lyrics, which give you something to hold on to in hard times. This past year they’ve beguiled us at Wales goes pop with their gazy textures and heavenly melodies and played Green Man as Rising nominees and performed a rapturous show at Swn festival.

While recent single ‘Growth’ showed that it wasn’t a one-off its lilting delicate couplets, gently tumbling rhythm that rustles with sighing melodies displaying a brittle indecision and lovelorn sway of hoping it will all work out with that special someone, we hope more will unfurl over an album in the year to come. All of which marks Rosehip Teahouse out as the sweethearts we need!