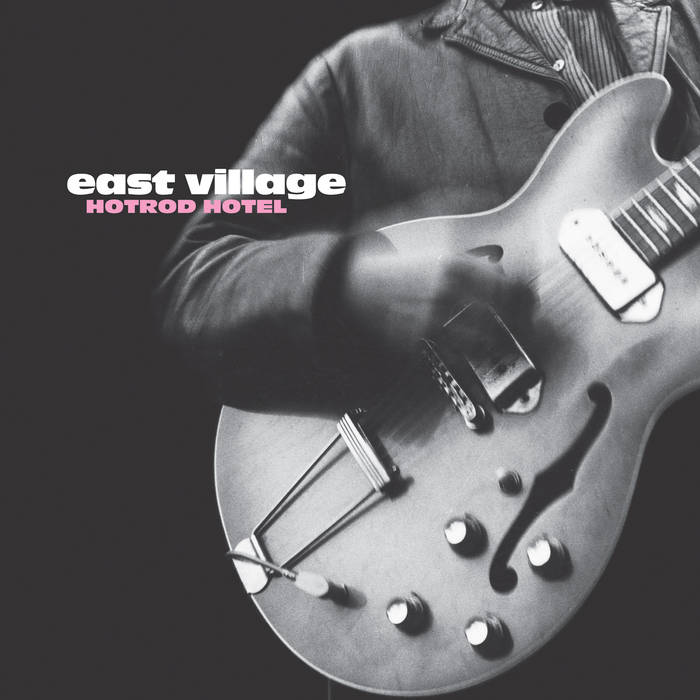 Indie-pop, not to be confused with Brit-pop, spawned these long-forgotten souls, who didn’t achieve all that was meant for them. East Village was a band hailing from the Buckinghamshire market town of Princes Risborough, 40 miles to the West of London, and now having their rise to cult status examined in this reissued singles collection Hotrod Hotel. Striking a visual pose similar to that of The Jesus & Mary Chain, these folk were not pedalling the dark-chords that their lookalikes did, instead, they were audibly like The Commotions (although minus the vocal drawl of Mr. Cole himself). No, when it came to their sound-set this rang with a sweetness that is uplifting, and rather than illustrating a dark day with an even darker hue, theirs would sing out at the opportunities available in even the darkest sky.

East Village are described as one of the ‘Great Lost Bands’, of which there have been many whose recordings can be found scattering the battlefield of music. A bloodless battle it may have been, although with the hollow carcasses of emotion laid strewn across the many conflicts, these are certainly one of its casualties. This is a 12 track collection that could so easily have been lost had it not been for our champions; Jeff Barrett’s Sub Aqua label who released two EPs following their conversion from their earlier incarnation as Episode Four, but this label’s collapse would leave the band label-less. Not without promise they recorded their debut LP with a loan from our second champion Bob Stanley, a friend, admirer and of course musician/journalist/author/film producer – need I go on? Without a label, this LP would remain homeless and it wouldn’t be until Jeff Barrett, now setting up the fledgling Heavenly Recordings, would re-enter the fold and with fellow musicians Manic Street Preachers, Saint Etienne and Flowered Up, would the Four Axeteers embark on a series of shows to express just what was available in this little slice of Heaven(ly). Although following this hard-fought campaign, and just as the band was garnering interest from their intended audience when playing to a SOLD OUT audience at the New Cross Venue in South London, the band were to end their set by splitting up on stage! The album that would follow, Drop Out (1993), was mixed posthumously and released by the Heavenly label, although hailed as a classic of its genre, it’s sad to remember that from here the lights had gone out.

That is until now and with the release of Hotrod Hotel, we can revel in their glory and what will strike the listener as soon as they take the very good decision of taking heed of this collection is just how strong this band was. From the familiar chords of “Her Father’s Son“, through to the delicious “Strawberry Window” to the very end and “Go And See Him“, these are songs which possess a listenable quality that will quell even the darkest day and draw its audience deep within the verses. Nothing present here actually sings of a particular fashion, just well-written songs, possessing a timeless quality that makes the marketing of this collection easier than it would have been had the band nailed their flag to the mast. Funnily enough, it’s Episode Four who I have immediate recall of, but East Village certainly possessed a quality that will surely make them every music fan’s friend. Play this and nail your feet to the floor, because I defy anyone not to be caught by their infectious hook! A sad reminder of friends who were unable to reach their full potential, but will hopefully meet a far greater audience from today.