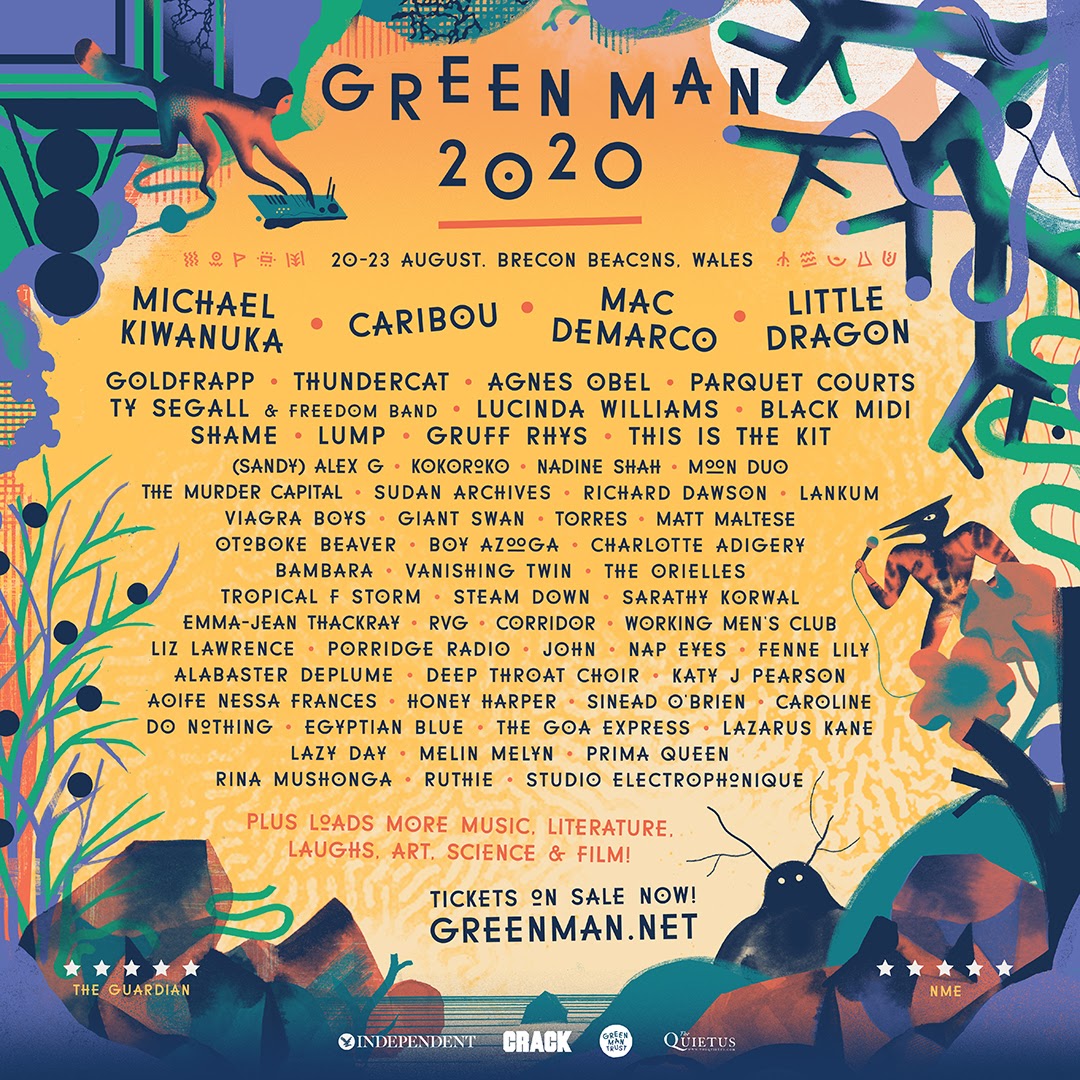 Wales’ largest music festival, Green Man, has announced the first names for this year’s event which takes place between the 20th-23rd of August 2020. Set once again in the epic surroundings of the Black Mountains deep in the heart of the Brecon Beacons for its 18th year.

Green Man also welcomes back one of the biggest names in electronic music Caribou, whose first new music since 2015’s Our Love, which became synonymous with memories of sun soaked festival fields, has been warmly received.

Talking about the festival, Dan Snaith aka Caribou says “There’s a kind of magic about Green Man – both that I’ve experienced myself in the past and that I hear about from friends who go every year. I feel very lucky that we’re going to headline this year – it’s one of this year’s shows that I’m most excited about. Hopefully we can bring along a bit of magic of our own.”

Always certain to put on an entertaining show, Mac DeMarco is set to bring his trademark slacker indie-rock to this year’s Green Man. He will play a set on Green Man’s iconic Mountain Stage.

Electronic duo Goldfrapp will continue the celebrations of the 20th anniversary of their seminal album Felt Mountain at Green Man this year with an undoubtedly stellar performance with seven albums; an Ivor Novello award; and Mercury Prize, Grammy and Brit Award nominations all under their belt.

Making her first appearance at Green Man will be three-time Grammy Award winning American alt-country singer Lucinda Williams, adored for her legendary perfectionism and rich poetic detail. Multi instrumentalist and pioneer of the 2000’s Californian psych-infused garage rock scene Ty Segall is sure to also bring an emphatic performance with a wealth of material to draw from, having released 12 albums in 12 years.

Due to share her fourth studio album Mytopia next month, Danish singer-songwriter Agnes Obel will no doubt bring a taste of her new music, alongside her platinum selling atmospheric chamber pop records to her Green Man debut this summer. While Parquet Courts will bring their danceable, immediate and uncompromising energy to Green Man for the first time since 2013.

Also appearing at this year’s Green Man will be LUMP, the collaborative project between Laura Marling and Tunng’s Mike Lindsay which resulted in their hypnotic self titled record.

With their genre-bending sound ranging from downtempo electronic pop with a naturally incorporated mix of contemporary R&B, hip-hop and underground dance, the Grammy-nominated, iconic Swedish four-piece Little Dragon are making their way to Green Man this summer.

Shame have made a name for themselves as one of the buzziest bands of recent years for their unflinching post-punk, with their debut album Songs of Praise . Another band spearheading a new wave of guitar bands is the incomparable Black Midi, who after much mystery recently released their experimental Mercury Prize nominated debut album Schlagenheim.

Some of Green Man’s most unforgettable performances over the past few years have come from the jazz artists who are currently making huge waves in the mainstream, and this year should be no different. Soul shaking afrobeat eight-piece KOKOROKO and London collective Steam Down, born out of weekly jam sessions and now renowned for their furiously energetic sets, are today announced to play at Green Man ‘20.

Elsewhere, Sudan Archives, The Murder Capital, Richard Dawson, TORRES, The Orielles, Charlotte Adigery, Sinead O’Brien, Do Nothing and many other exciting artists join the bill, with plenty more names across all stages to be announced over the coming months.

Tickets are on general sale now, with early bird tickets having sold out in record time. For those looking for the full Green Man experience, the Settler’s Pass is available, which turns the festival into a week-long holiday, allowing early access to the site from 17th August, and includes workshops, music, discounts on local heritage sites, galleries, castles and more.

The full first line-up announcement is as follows: