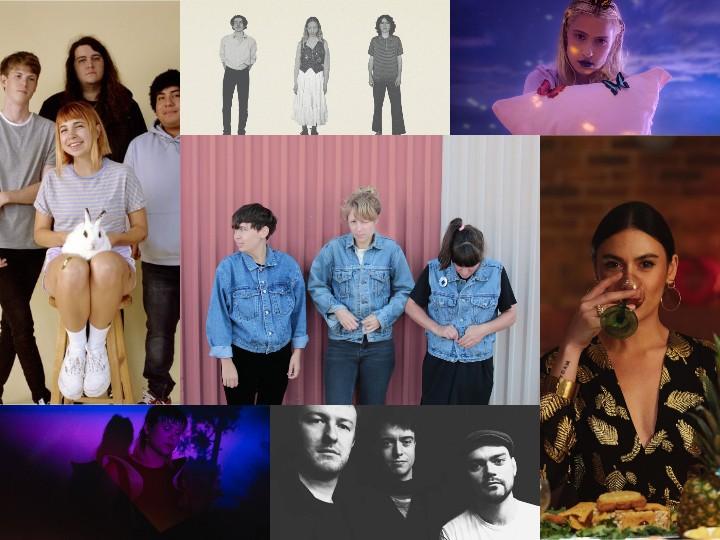 Who? Radula
What? Playing My Guitar
Where? Sweden

Why we love it? Kick ass trio Radula take us on a thrill ride of drum rolls, serrated riffs that jangle across the dance floor, yelping existentialism and wonky harmonising, in this fantastic short sharp shock of pure visceral, garage pop. Awesome! They say, “Radula sprung out of a desire to create a space far away from the strains of the conservative och masculine stereotypes of the music scene. In their search they learnt new ways to play, hard and lost, naive and brooding, fun and serious, they wanted to shout loud and sing ugly.”

The band will release their debut album Lovechild on the Gothenburg based label PACAYA Records. (Bill Cummings)

Who? Beach Bunny
What? Promises
Where? Chicago

Lili says “‘Promises’ is a song about the frustration, doubt, and pain experienced before and after a breakup. It’s a song about loss and the most vulnerable song on the record.” (Bill Cummings)

Who? Banoffee
What? Contagious ft. SOPHIE, EMPRESS OF, CUPCAKKE
Where? Melbourne

Why we love it?
Banoffee releases her debut album Look At Us Now Dad next week on February 21st via Cascine. Her new single ‘Contagious’ is a superb slice of minimal and pulsing futuristic electro-pop, pierced with exquisite vocals that encapsulate the feelings of the world that’s pressing down on you. So promising. It comes with another excellent video. Banoffee says: “The video is about loneliness and the feelings of ostracisation that arise when your issues seem too much for the world to handle. It follows a woman roaming the landscape in a wedding dress, totally prepared to give herself up to something, yet completely alone and isolated by her sadness.” (Bill Cummings)

What? Frame Of Reference

Why we love it; Only the trios second ever release, ‘Frame Of Reference’ proves an excellent counterpart to late-2019 debut ‘Now You’re Moving’. Playful Hammond organs, a skittering beat, and dulcet vocals this spacey is haunting and gorgeously enveloping. Haunting and refreshing.

They say “The song is trying to convey a sort of euphoric sadness. ‘Frame Of Reference’ is a song belonging to a feeling, belonging to a change that is yet to be made.” (Bill Cummings)

Why we love it? Scrounge are dynamic duo Lucy & Luke, they return with the visceral ‘Night Stand’. Powerful and straining with raw tension, the fantastic scatter-gun drums, menacing guitars and post punk muscularity of this song explodes into a nightmarish crescendo that juxtaposes Lucy’s hollered vocal (“So much waiting around‘) with Luke’s doom spoken words. Simmering and majestic it’s the second to be released from their debut EP, called Ideal, which came out last October on Fierce Panda. (Bill Cummings)

Why we love it?

Classically trained as a percussionist in Australia, Eilis has now settled in Berlin and began work on her new EP Never Too Emptional as part of an application to join the circus signing to Reckless Yes in 2019.

Why we love it? Recorded and produced in their drummer’s front room, Slender Pins’ third release ‘Rough’ is an visceral burst of rippling, urgent new wave inspired by “lust and decay”. The track is a guitar-driven two-minute and 10 second rattles along with frenetic drums and skidding metallic riffs and a horse almost unhinged vocals and lyrics that tell a half-true story of the power of sexual adventure in a world of Tinder-ised gloom. Its the sounds of a world that’s about to fall apart, brilliant and brutal. (Bill Cummings)

Who? Nadine Shah
Where? Tyneside
What? Ladies For Babies

Why we love it? Nadine Shah issues a long overdue riposte to Ace of Base’s ‘All That She Wants’ this week, in the form of her new single ‘Ladies For Babies (Goats For Love)’. As you may recall, with the Ace of Base song it was just about possible to ignore the creepy lyrics and wallow in the song’s catchy dopiness. Not the case here. This is definitely a song about a guy who’d rather fuck a goat and it isn’t going to let you forget that. Which is of course Shah’s point – that pop music has singularly failed to prepare her for the reality of life for a woman in the roaring twenties. Inspired by one of her brother’s paintings, it’s the first track to be released from her fourth album, Kitchen Sink, due to hit the stores in summer. It’s a moody, sardonic eye-roll at the patriarchy. (Colin Bond)