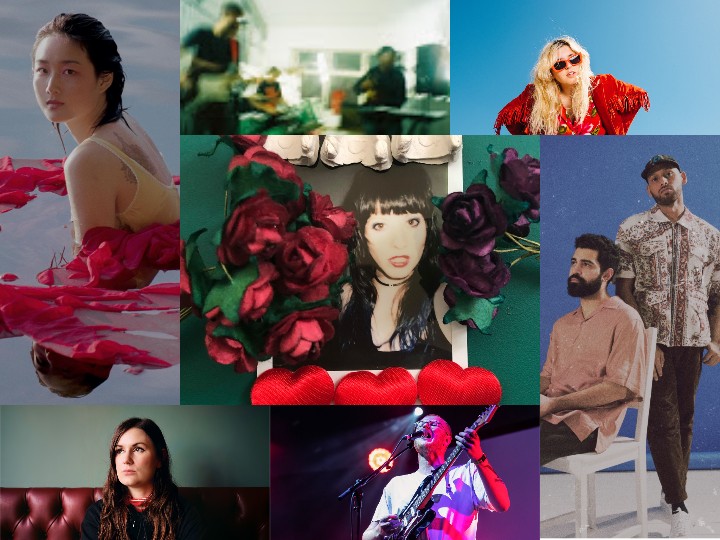 What? Step By Step

What they say? ‘Step by Step’ is the bands next single from their debut album ‘In Threes’ (out this Friday, March 6th). HANDLE incorporate a diverse range of influences, from samba to no wave. They are a three-piece now based between Manchester/London/Brussels who make a uniquely minimal sound, buoyed by poetic, urgent vocals. Each instrument (bass, drums, keyboard and voice) is permitted its own space, yet somehow the result is a brilliantly unified yet understated sonic experience that demands then commands your attention.

Why we love it? Frenetic and restless, busy bass lines and beats, and frantic yelping commands firing up the party with a wound up spring of futuristic, experimental, floor filling no wave music. If Coronovirus is going to wipe us out we are going to go down dancing. (Bill Cummings)

Who? Broken Down Golf Cart

Where? Liverpool via Ottawa

What They Say ? “‘Alibi’ is about feeling overwhelmed by your surroundings, standards and the stuff that every day brings. News, media, life… trying to make time for yourself, to hang out with yourself… and apparently it’s so concerning to other people to hang out by yourself so you might need an alibi for what you were doing. Or like feel like you need to give one.”

Why We love It? Broken Down Golf Cart is the ‘loner bedroom rock’ project of Canadian musician and visual artist Jen Baranick. She’s been releasing a new song and video for the past 8 months or so and her latest release ‘Alibi’. It’s a chiming bittersweet slice of grunge-pop, replete with reverbing guitars and a vocal that sounds simultaneously crestfallen, hopeful and pissed off. Jen’s not writing in her bedroom, lamenting a post Brexit world where every artist needs a visa,  when shes’ producing stop motion videos for other artists which could be described as Nick Parks on Acid. (Andy Von Pip)

What? Do You Think We’ll Last Forever?

What She says: – “The song is fun, but it’s also tense, like a rubber band that’s stretched until it snaps. It’s not a love song, but rather a song about the anxiety that comes with the excitement of potential love. Is this person falling for me too? Am I good enough? Are we on the same page? Anyone who’s had a passionate fling knows this feeling, so I tried to get across that the narrator is just like any other uncool person with anxiety issues.”

Why we love it?

Caroline Rose is a true musical chameleon. After throwing off the limitations of her early ventures into Americana she took three years out before releasing a new album. The result was the glorious ‘Loner‘ which marked a radical shift in her sound mixing pop, rock, dance and synth masterfully. ‘Do You Think We’ll Last Forever‘ from her latest album Superstar once again see’s her experimenting and traversing genres and at times sounds like Courtney Barnett in an 80s discothèque. There’s also more than a hint of the wry wit and charm of Alex Cameron about her work too, tongue in cheek, hugely danceable, and produced with style and panache. Who do we contact to suggest they record a duet? (AVP)

What They Say? Peter Harrison -lead singer & Producer   – “It was never supposed to be a single but the more I worked on it and listened to it the more I thought ‘yeah’“. Lyrically the song takes you through a few things that swirl around in my head. Mostly guilt, longing, desperation and uncertainty. Normal things. This is also the first SPQR song without distorted guitars.”

Why we love it? This is edgy insistent driving art rock with a hypnotic groove. Whilst having prog predictions ‘Just Sumfin‘ never meanders down the road of self-indulgence or finds itself trapped in the clu-de-sac of pretentiousness, instead it keeps the fire in its belly well stoked throughout.  Liverpool bands in the past have so often sounded like, well, Liverpool bands. SPQR instead sound like they are from outer space. (AVP)

Where? Bahraini via London

What they say? Dar Disku Records aka Vish Mhatre and Mazen Almaskati unearth rare 70s Arab Disco records, once hidden amid the region’s conservative regime, edit them and put them on Western dance floors.

Why we love it? A rumbunctious 90s tinged banger that bleeds into a comedown, that retools middle eastern and world music influences. Intricate and layered with Eyptian mysticism and an appreciation of pacing a dance track. Brilliant. (BC)

What? The Onely Ones

Fat Possum will be re-releasing this record for the first time ever on vinyl to coincide with the signing. They’ll be doing a small run of shows around their SXSW slots.Of the song and video, Kang says: “You know when you experience a sudden extreme of emotion? Not quite anguish, not quite joy, but some unutterable mixture of both. This song is my attempt to express that.”

Why we love it? Framed in sepia, propulsive slow motion drum machine clicks are woven with glimmering guitars and synth sweeps. While Kang’s sumptuous vocals that bewitch, shifting from intimacy to swooping elegance trembling with both mysterious and affecting textures. This is the sound of devotion, this is the sound of falling apart. Haunting and quite fantastic.(BC)

What they say? Katie Malco’s debut album Failures, set for release via 6131 Records on June 5th. She also shares a brand new single ‘Animal’, which tackles the frustration of growing up in a small industrial town in the Midlands and subsequent escapism through intoxication.

Why we love it? Resounding with kick ass guitars, rollicking percussion and laced with Malco’s muscular vocals that go from wistful and introspective to widescreen and emotive in a skip. “Carry me home I can’t breathe” she sings on the shoulders of a powerful crescendo that details her struggles with alcoholism as a means of escape. Emotive and dynamic this is Malco coming into her own.(BC)