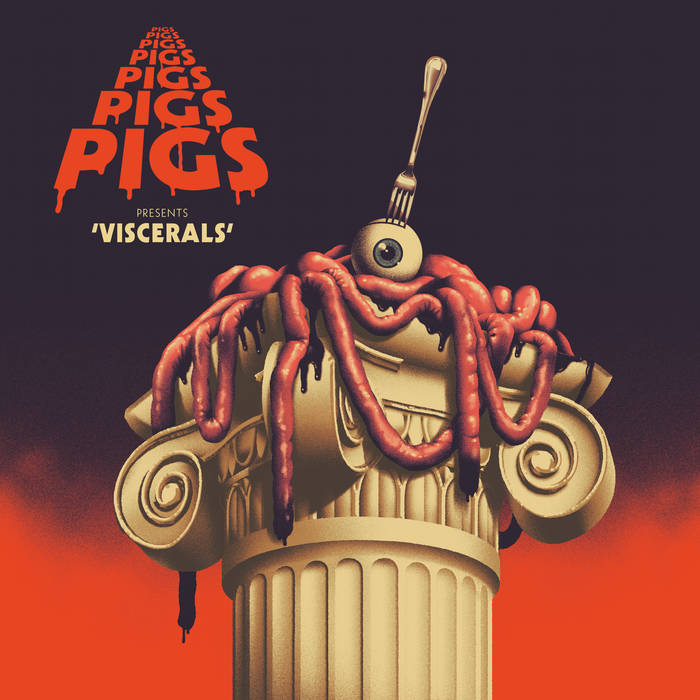 Is this an album, or a prophecy? I would like to think that this band were privy to the global pandemic and were charged with writing a soundtrack to accompany “these difficult times”. I then suggest that they misread this memo and went about writing a soundtrack for the apocalypse. However you choose to believe the story, this is an album that simply has to be experienced, like the night Cobain met Love, things were never going to be the same again, in music, or his life certainly. Imagine sprinkling popping candy on your Rice Krispies at breakfast time, only amplified a hundredfold! Pigsx7 are certainly an antidote for something, if only the rest of the world could work out to what, I’m sure we would be in a far better place.

Opening the door on this album, your first experience is ‘Reducer‘, a pretty awesome introduction to an album that just doesn’t cease in its intensity. These 5 musicians must surely be the bastard offspring of Motorhead and Black Sabbath, the passion of each of the musicians in these bands oozing from every pore in these 8 tracks. Vocalist Matt Baty proclaiming someway into this opening track, that “Ego Kills Everything“, as Morley’s double kick hammers out its foundation, with guitarist Sam Grant’s contribution soaring high above this broth, with notes worthy of any bird of prey. This ride is exhausting, I’m not being allowed a moment to ponder the magnitude of this work, as ‘New Body‘ strides into view. Batty exclaims “I’ve had too much to drink, too much to think. I’m dancing with the Devil with his two left feet…” This is like choosing the wrong door, walking through and finding yourself in “Wonderland”, but in this case, the Mad Hatter is playing a Fender twin neck and Alice is screaming at you from the deepest larynx, which in itself is enough to spill your tea!

I have barely scratched the surface, this being the 3rd track of 8, on an album timed at just 39 minutes. What might be described a segue is now being performed. ‘Blood And Butter‘ is a track filled with alarming confidence, emphasised drum beats begin, as Baty announces what is on “today’s menu, the head chef is serving up poison, made with the cheapest ingredients possible. We can nibble on tapas news, which tastes foul with hatred…” I won’t spoil the rest for you, but make mine a double. This is the most bizarre musical ride I have been on for quite some time. Spinal Tap comes to mind, but not wishing to defile this band, I should say I simply love Spinal Tap, but this is not a comedy, moreover a band writing history for these troubled times.

Not that any of the numbers featured are anything less, but as the second half of the album begins, ‘World Crust‘ takes its place on Lucifer’s shoulders, the band’s contemporaries, the likes of Motorhead/Black Sabbath/Pantera/Sepultura gaze on, happy in the knowledge that they have cut such a confident path in which Pigsx7 are now performing. This album is nothing less than brilliant, it may not be to your taste, but these five musicians have created their 3rd full-length long-player and laid down an album that would wake even the dead! In the 9 minutes of ‘Halloween Bolson‘, you might be forgiven for believing this album to be anything other than possessing an angry intent, but that’s just as the music would appear. Like a surgeon operating on a patient, this is nothing less than an intricate dialogue between nature and its people. I’ll leave it to Baty to have the last word on ‘Hell’s Teeth‘, that is “Let’s rock, in peace“.

Viscerals is released on 3rd April through Rocket Recordings.