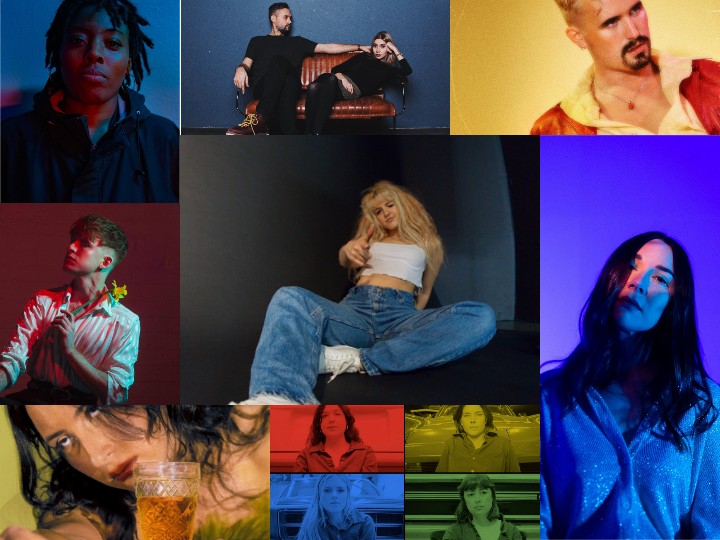 What?  Nihilist In The Club

What they say? Perfectly distilling the swirling tension and confusion of our generation on this self-written and self-produced project, Camina’s music is a bubbling cauldron of dark electronica, industrial techno and dreamy, lo-fi bedroom pop.  ‘Nihilist In The Club’ succinctly encapsulates the inside out, topsy turvy system that we are pushing back against today as everything around us hurtles towards an uncertain fate.

Why we love it?  Cleverly produced alternative pop, dressed up with soft wispy vocals and a killer spoken chorus that gets stuck into your mind after just one listen.  Just one of five sublime tracks taken from their ‘Nihilist In The Club’ EP – this track perfectly showcases who Izzy Camina is and what she’s all about.
(Lloyd Best)

Why we love it?  Mashmellow are a Moscow based dream-pop band that formed in 2019.  Singer Masha Shurygina mellifluous soaring vocals bring to mind the likes of Belly and the driving guitar-driven grunge-pop of “Celebrity Skin”, era Hole.  Formed around the creative nucleus of Masha and Egor Berdnikov ( Egor is a member of the well-known in Russia indie-rock band Hospital)  ‘Share It’ is the first song the duo wrote. It’s a gorgeous debut and arrives replete with an impressively cinematic dream-like video. (Andy Von Pip)

What they say? “‘Machine’ contemplates workplaces and hierarchies; the feeling of being like a machine inside the machine but as well the fact that sometimes great ideas, thoughts & observations come to you during the working day, in unexpected ways.

In the video, we extrapolated this notion by playing with the idea of doing vs not doing inspired by our favourite singing mechanic John Travolta and the films of Kenneth Anger. Our pal Bernie Smith Cars for Stars let us loose in his showroom for the day, and this is the result.  We used two cameras, one static and one roaming explorer, then collaged them together to achieve the desired effect.”

Why we love it? An insistent almost hammer horror jangle and mechanical beat is paired with new wavey dead pan vocals that deal with notions of work-hierarchy struggle, weaving in and out of this streamline super car speeding down the highway.
(Bill Cummings)

What they say?  W.M. (an abbreviation of West Midlands) was the first song I wrote after moving home following a break-up.  I lived in London for 11 years and coming back to small-town England as a single gay man was pretty daunting.  On one of my first weekends back, I called up some old friends and we headed into the nearest big city, Birmingham, for a big gay night out.  The night was a wild success!  I woke up the next morning with a headache and inspired to write.  My producer Gil Lewis and I sampled a Clare Maguire (fellow West Midlands babe) song called ‘Jungle Gardenia’ – which she had written about ‘Paris is Burning’, which added another layer of campness.  All of these ideas came together so easily to create this big disco-bop about heartbreak, gay nightlife, finding yourself, homecoming and learning to love where you’re from all over again.

Why we love it?  Upbeat, positive retro-futuristic disco at it’s finest and a delicious taste of their upcoming album, Black Country Disco.  Aspaul’s smooth vocals and lyrics about finding your own happiness are sure to put a spring in your step and a smile on your face, even if the skies are gray. (Lloyd Best)

What they say?  A dance-pop song with rock and dubstep influences, ‘Curious’ is a lyrically playful track which challenges binary thinking in terms of sexuality, beckoning you to “stop paying so much attention to your labels” and embrace “a new world”.

Why we love it?  Perfectly crafted pop excellence which helms Rua at the forefront of sexual liberation.  The chorus is bright and playful, the production is crisp and reminiscent of Born This Way (Lady Gaga) with a touch of Blackout (Britney Spears) but undeniably still true to Rua’s own sound. (Lloyd Best)

What? In The Morning

What they say? “Travel has always been a huge healer for me. I wrote “In the Morning” in my car while driving up the Oregon coast on my first solo tour. A really traumatic relationship I was in ended days before leaving and I felt awful, but also really grateful for the excuse to leave the city. The first few lines and melody of the song popped into my head while I was driving to Lincoln City, Oregon, feeling the disparity between my emotional state and the intense calm of the surrounding natural beauty. I stayed at a KOA campground in Lincoln City that night; I sat in my parked car with my unplugged electric guitar and wrote the rest of the song. It’s basically about that experience – feeling so overcome by sadness but also empowered to start anew, to find your way back to yourself.”

Why we love it? The gently haunting and jazz tinged opening verse, unfolds slightly unexpectedly into a powerful anthem touching on the healing power of travel. With an elastic and affecting tone and an appreciation of dynamics this is a beguiling monent of escape amidst the very surreal times we are living through. (Bill Cummings)

Why we love it? A clean, crisp tender verse that sounds like a plea for a lover to open up and let her in ‘I just wanna talk about love). It unfolds into a clever, alt-pop track a bricolage of percussion and snaking synths envelops, and won’t let go. Punctured with soul and an accessible pop sensibility that shows a lot of promise. (Bill Cummings)

Whay they say? She describes the song as being about  “getting over someone so much that you figuratively bury them? ‘Closure’ is the journey you take to finally slamming the door on that person. It’s a high energy middle finger to your once beloved.”

Why we love it? Natalie’s been around a few years now and was last seen on Whyte Horses superb cover of Plastic Bertrand’s ‘Ca Pour Plane Moi’  (video here)   new single ‘Closure’ is one of her finest songs to date and has the confident air of someone who’s really found a sound that suites her songwriting and vocal style.(Andy Von Pip)