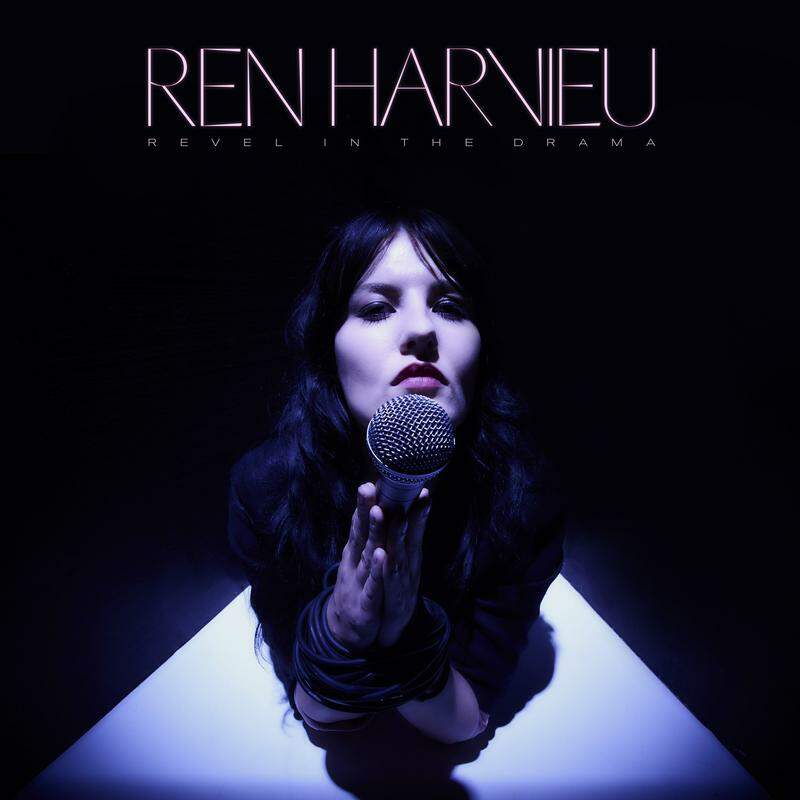 Fearlessness. It can take dramatic incidents and traumatic changes both emotionally and physically to one’s life to unleash this part of our personality. For Salford’s Ren Harvieu it was nearly a decade of hardship – beginning with the life-threatening spine injury in 2011, to a record label drop, to a relationship break up and to finally leaving her hometown in Manchester – that gave the now London based musician this bravery. Against unlucky odds, the Mancunian has reinvented her career by releasing her second album Revel In The Drama eight years after her commercially successful debut Through The Night.

As the album title suggests, Harvieu fearlessly embraces the unpredictability of her life up to now. Produced by the supportive Romeo Stodart of The Magic Numbers, whose friendship has been a major stepping stone in her career recovery, the sophomore LP showcases Harvieu’s part heartfelt part whimsical lyrics much more – as tracks were co-written on the previous record – accompanied by an effortlessly vigorous voice and a blues-pop fusion (with it’s use of organs, orchestra and guitars).

The bossa-nova-rock-pop opener ‘Strange Things’ is Harvieu connecting and taking notice of the ignored outsiders of the world – having gained a different perspective when being in a wheelchair, as people suddenly started to speak to her with a condescending tone. “I see you, beneath the blanket of your clothes. I see you, searching for the darkest corners. Who cares if you are a boy or girl?” The cabaret-country fusion ‘Teenage Mascara’ also celebrates difference but instead the multi-layered sides of one person’s identity, from the glamorous to the groggy. There’s a cheeky tone to the lyrics and slightly sensual vocal delivery that along with the deep tuba and lap steel guitar imagine a character in a smokey bar flirting with the audience. “Quick snap. Take my photograph. I’m looking moody, hey don’t make me laugh. I’ll let them have it with that strawberry pow. Let’s those cards and eyes pop right out. Teenage mascara running down my face.”

‘Yes Please’ is also sexy and liberating. The tip toeing drum beats are just teasing as the lyrics as Ren Harvieu discloses her irresistible seductive side: “We can play out all your darkest confessions. But you gotta get on your knees. Baby this is way more than just a suggestion. I’m what you shouldn’t want. But that’s just what I’m gonna give.” This is a songwriter that’s boldly expressing her freedom.

However, ‘Curves and Swerves’ takes sexual encounters in a less fun light. “If I take off my clothes in the dark will you still be laughin? And if life wasn’t cruel then why does this keep happening.” Perhaps detailing that a physical defect caused by an accident may have ended one of the songwriter’s sexual relationships. But this is Ren Harvieu, a fearless strong soul, who defiantly responds with: “You’ve got some nerve to even think that you could live without it. Maybe I’m much too much for a lost boy like you.”

The record’s most playful track ‘Cruel Disguise’ is the ultimate display of Harvieu’s fearlessness. The composition switches back and forth from a gritty Robert Rodriguez soundtrack to a piano ballad. The musician’s most dramatic, gothic and spine tingling performance. The musician is unafraid to face the truth, even though those close to her are being overprotective. “Mother there is no need to shield my eyes. Father show me what’s behind your cruel disguise. Lover, strip of my wounds and hold me tight.”

Although musically nothing is as interesting as ‘Cruel Disguise’ with most following the orchestral blues or slow piano pattern, the lyrics are consistently great, a songwriting maestro effectively displaying her dark experiences. Spirit Me Away’ and ‘Little Raven’ adds in supernatural touches for metaphorical effect. The former is nightmarish, suggesting that a dark presence in the form of a dog is stalking her. This presence is perhaps an emblem for the truth that she’s been denying about her condition: “I’m a big star. I’m a huge star / Just don’t open your eyes. Black dog won’t follow me home.” While the story on ‘Little Raven’ is perhaps a comment on insanity and is reminiscent of a particular famous Edgar Allan Poe poem.

Ren Harvieu ends Revel In The Drama spectacularly with ‘My Body She is Still Alive’. Delivering a similar message to Channy Leaneagh of Poliça – who also fractured her spine and wrote the album When We Stay Alive about it – by embracing survival. She sings the three words “But I’m here”. Powerful because they promote the idea of avoiding unnecessary depression and celebrating life’s dramas fearlessly.