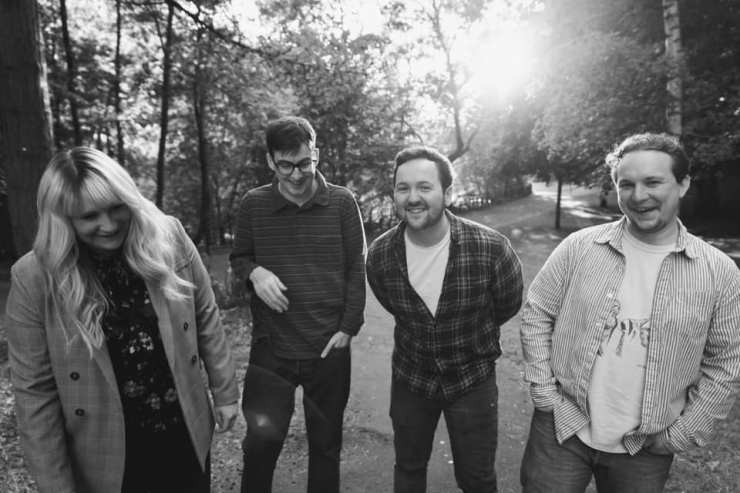 The first thought that came to mind, is one of a band from the far East, a band who walk the streets of Tokyo at a very respectful pace, but then again what’s in a name? My next stop was to learn that this band hail from the city of granite and design, again another curveball, as Seattle was my guess on hearing their sound. So Glasgow then, their contemporaries such as The Blue Nile in their DNA, Teenage Fanclub, never far from their fingertips. But rather than sounding a karaoke version of this band, Yakima stand-up and perform tunes that are simply sublime. The guitar cries out to be heard, the drums setting a firm foundation from which the rest of the band play, and vocalists John Houston and Neil McArthur execute like a barista, preparing the smoothest cappuccino.

The EP starts with ‘It Helped‘, shades of MBV meeting TFC present within this glorious melodic number, heavy on bass and vocal harmony, as Houston and McArthur open with “It helped, again…” Eager to find out just what I continue, “Such a thrill, no big deal. Let them…” and the translation is lost! Hey-ho, this is surf music for the landlocked, as drummer Kay McLaren’s kit continues to lay the foundation, and the vocal harmony is performed to fade. Having previously released a handful of singles, their debut EP is an exceptional collection of 6 tracks, but just a recommendation; don’t search for “Yakima (band) singles”, that is unless you can afford the airfare. Changing pace, the following number ‘Judy’s Lament‘ continues in the guise of a shoegazer out for a Sunday stroll. I just love the guitar that sits up front, casting a ghostly shadow. The song goes, “I’ve been awake for days….” and again the translation is lost! Better sit back and enjoy the complete sound-stage, these are end of the week slumbers, a perfect space in which to lose yourself.

It is clear as the listener proceeds into Go Virtually, that by the time track 3 ‘Thanks‘ comes around, the Valium is taking effect. The pace has slowed, the vocals not exactly changed, it’s just that these are no longer in a hurry to get anywhere and at this point, does it matter? As the vocals sing “Is anyone complete, everybody wants their own disease… I need someone to help me understand. When I know, I know it’s hard to make amends…” It’s a love song, the downers are wearing off, I’m in heaven. Just as I was about to put the day to bed, the second half of this EP comes in and ‘I’m Happy (In No Way)‘, lifts the pace and rings a true indie journey into what has been missing for far too long in this indie-dom. Keen guitars, a swift pounding rhythm and a song that just seems to make sense, in this place and time. “I’m happy to go to you. I shouldn’t care at all. I’m happy to go to you, carry on if I’m done.” Well, I have it placed and the music? Just the perfect sub-3-minute essence of what life is, has been, or will become, although some might insist on more, isn’t that always the case?

Coming toward the end of this presentation, ‘Real Time‘ is making concrete what is already in place, with a bluesy tone taking hold, as a riff Keith Richards would be proud of screams out to be heard and by this point, there’s not a great deal of competition. So with 5 tracks that have, it would be fair to say taken this critic to nirvana, returned to pay the piper and then continued on its sky-bound journey. By the time ‘Sheep Boy, Cry Man‘ – the final number – comes to visit, anything less than brilliant might be considered a loss. As this was the number that introduced me to the band and I was eager to hear more, I think this quartet are playing to a home crowd. For a former indie kid, this is like the ice cream van visiting on a Saturday afternoon, perfect in every respect. A bassline that must’ve been created in heaven starts and those familiar vocals chime out, “One more rest wouldn’t hurt. I suppose I’m just curious, don’t change a thing….I’ve got a better way…” Then the guitar solo kicks in above the riding bassline and I know that Yakima has me sold.