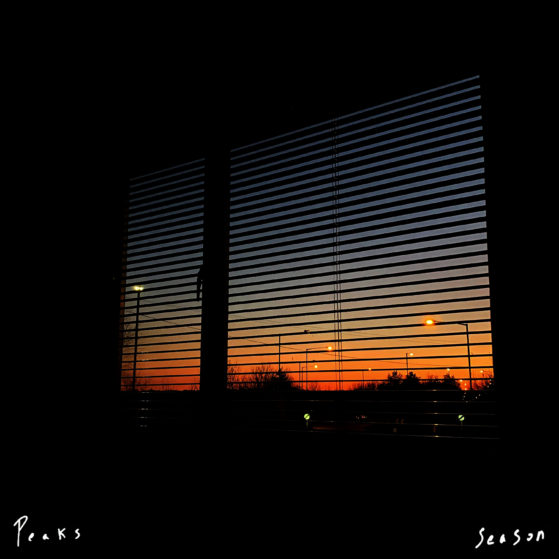 Here’s a thing about The Unprecedented Times We’re Living In: it’s very quiet isn’t it. There’s a weird mix of anxiety and resignation in the air, waiting for something to happen, anything, combined with the feeling that actually, you don’t want anything to happen while also getting used to the idea that nothing is going to happen for at least another month or something anyway. That air of quiet resignation undercut with an edge of low-level anxiety is one that flows through Season, the debut album from Peaks. It’s a record made up of little more than the acoustic  guitar and vocals of Ben Forrester, recorded live one afternoon in September last year in Salford.

The album’s title is reflective of the inevitability of change. Forrester says the album was written in a period of (forgive the pun) peaks and troughs, from struggles with grief to the joy of engagement. Even the album’s cover feels like an illustration of uncertainty, a shot of a window taken from indoors, the sky outside fading from burnt orange to a deep indigo. Or is it the other way around? Is this a sunrise or a sunset? What’s the difference when we spend all our time indoors looking through the window anyway?

Opening track ‘Happy to be Here’ is characteristically brief at just over two minutes long. A chiming, minimal guitar line lends weight to the line “I smiled with sincerity for the first time in weeks” before Forrester slips into falsetto for the second verse, his voice cracking with emotion at the end and its done. Elsewhere ‘The Life Aquatic’ echoes this theme of personal, private struggle: “Life takes me by the throat and I just don’t know why but I won’t let it choke” he sings over a naggingly familiar riff.

There’s a lighter side as well though, particularly in the playful refrain of “I’m an OAP, you know me” on ‘OAP’ not to mention the kitchen sink stories of home recording as a child on ‘Fourteen’. That song could almost be a Badly Drawn Boy track, all gently plucked guitar and Forrester’s warm baritone finding its sweet spot. It comes to a close with some delightfully wonky whistling, giving us the most homemade-feeling moment of the record.

The double tracked vocals of the following ‘Eagle Eye’ give it a more polished feel which carries through the second half of the record. The transition between the tired resignation of ‘The Balcony’ into the instrumental ‘Spud’ feels like a catharsis. Of what it’s not really obvious but it feels like there’s a clarity here, like a weight has been lifted from the end of ‘The Balcony’ “fuck ’em is a phrase you used to say and it made my day”, to ‘Spud’‘s joyful “lalala”s. As ‘Made of Stone’ fades away bringing the all-too-brief nine tracks and 23 minutes to a close, a weird fuzz of reverb elbows its way in, like a kind of snap back into the real world after our quiet moment of reflection. Sure, there’s not much to this record. It’s short and sparse but it’s a quiet moment of contemplation and that’s something we could all desperately do with more of.

Season is out now on Die Das Der.