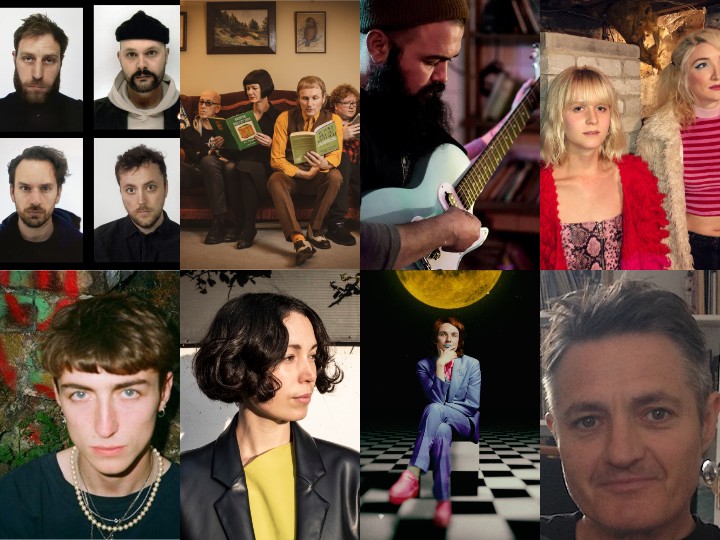 What? Frightful in Sunlight

What they say? Having started life as the lo-fi bedroom recording project of romantic partners Mia Lust and Laura Orlova back in 2016 Chemtrails quickly set about releasing two digital-only EPs before making their album debut in early 2018 with Calf of the Sacred Cow. The Peculiar Smell of the Inevitable is the band’s heaviest and wildest record yet.

Why we love it? Frantic and formidable, this humongous hammer horror-eque belting garage rock track is undeniable and riven with paranoia as it scampers down the street like Gnasher after Dennis the Mennis. Brilliant! (Bill Cummings)

FFO: The Cardiacs, The Cramps

Who? Micko and the Mellotronics

What? ‘You Killed My Father’

What they say? Every once in awhile, purely by accident, double A-sides rapidly metamorphose into vital cultural beacons of sorts (‘Paperback Writer’/‘Rain’, ‘Starman’/‘Suffragette City’) usually embodying the next vital stage of a well-established artiste’s or band’s career.  More often than not, a seismic shift in genre is heralded.  In this understandable non-culture we are all currently residing in, live gigs may be currently off the menu, but we now have a righteous springtime ambience in the form of a good old-fashioned record release.  ‘You Killed My Father’ is a rabble-rousing stadium filler stylistically speaking – the double A-side to the Mellotronics’ just-released ‘Noisy Neighbours’.

Why we love it? This is a definite departure from the Mellotronics’ brilliantly caustic ‘Broken Britain’ trademark lyricism and sound.  They have recently pushed the boundaries with their live favourites ‘Imelda’ and ‘Halycon Days’.  ‘You Killed My Father’ continues this trend and is their absolute pinnacle, in my humble opinion.  This self-evolving arpeggiated number immediately focuses on Micko’s use of tantalising lyrical detritus and showcases Nick Mackay’s Bonham-like stop-start drum rolls.  It is more akin to a ‘lighter-waving’ progressive rock anthem and sticks out like the proverbial sore thumb.  It contains piano flourishes and a psychedelic string arrangement courtesy of the late great Neil Innes (the Bonzo Dog Band, The Rutles, Monty Python) who died at the end of last year.  (Humphrey Fordham)

FFO:  Buzzcocks, Jam,  Only Ones, Pere Ubu, early Siouxsie and the Banshees.

What they say?   Having enjoyed a lengthy – and ongoing – career as a music writer for NME, The Mirror, and many others, Gavin Martin has turned his skills to another literary pursuit of late, namely poetry.  Barbecue Sauce is a typically savage, unrelenting dissection of the climate crisis, pulling no punches whatsoever, and matched with a suitably apocalyptic video.

Why we love it?  Martin’s distinctive tone is a delight in itself, and although we love him in more whimsical mode – his recent tribute to the A21, set to Kraftwerk-esque beats – but it’s at its most explosive here, in fired up and angry.  Compelling and on the right side of history, we reckon.  (Ben Willmott)

Why we love it? The soundtrack to the summer has officially arrived in the guise of Bronze Avery’s ‘Boys!’.  It’s a super cool queer-positive track, brightly lit with tropical vibes and a sublime vocal that floats gently over the song.  This might be Avery’s best song yet and the perfect companion for sunshine and relaxation.  (Lloyd Best)

What they say? Zita is the sacred music playing from a shadowy temple in a different, darker dimension.  Even when the choir enters and light momentarily breaks through the darkness, the voices are warped, as if reaching us only in distorted echoes from a distant past.

Why we love it? Ethereal and powerful, there’s almost something tribal about Wuh Oh’s Zita.  It dips in and out of sections that feel spiritual, church organs whisper softly in the background, distorted voices chant and it all contrasts beautifully against the electronic elements to create a truly unique sound.  It conjures up an image of an ancient temple in sitting in the heart of a cyber-punk city.  (Lloyd Best)

What? House of York

What they say? Can the UK ever truly be meritocratic with a principle like a constitutional monarch? Our guess is probably not. The title is an overt nod to the War of the Roses; the House of York was seen by many as the ‘true’ heir to the English throne but the Tudors won the war and the Yorkists were swept away, with their power assimilated into the Tudor monarchy. We thought it was an interesting metaphor for how history and myths are at best pretty sketchy and at worst lies built for the benefit of an establishment, ruling class, or vested interest. Sound familiar?

Why we love it? They had us at “This is not my national anthem…” Tar-stained vocals, care of DC Fontaines’ visual artist Charlie Drinkwater, explode oils of vitriol all over the establishment in this perfectly skewed debut single from a band that sound fully-formed and dangerously poised. Direct, blissfully nihilistic and utterly compelling on first listen.  (Trev Elkin)

FFO: The Fall, Ought, Protomartyr

What? Don’t Be Afraid

What they say? ‘Don’t Be Afraid’ was a song I wrote while going through a deep patch of anxiety whilst in New Zealand. After three intense days of isolation and panic attacks, it just poured out of me. Most of the song was a freestyle that was my unconscious trying to encourage myself to focus on reality and get out of my head.

Why we love it? Opening with a beautiful and reassuring “Tycho, don’t be afraid, you’ve got money to make“, the track flows smoothly on and becomes an anti-anxiety anthem.  The use of a vocoder adds an interesting dynamic to the chorus and the layering of vocals is often beautiful and unexpected.  (Lloyd Best)

What they say? The track appears on her new album, Inner Song, which has been moved to August 28th on Smalltown Supersound.

“This track speaks as to how feelings and insights are more accessible to us at nighttime –
how the veils are thinner somehow and therefore how we are more able to connect to our hearts true desires,” says Owens. “I wanted to release this track as a gift to you during this crazy time, to give a part of my heart to you all.”

Why we love it? Evocative and enveloping this tapestry of night time circadian rhythms is coloured with an isolated refrain “it feels so good to be alone” that could reflect the moments when you actually enjoy this endless isolation. Before building into a textured techno floor filler. An expert balance of ambient and body-popping. (Bill Cummings)

What? Dead On Site

What they say? Matthew Paul Butler’s Hymns For The Dying have found refuge with Epifo Music, was released at the end of last year. Navigating the realm of neo-folk / indie-soul, Butler’s songs are driven by a diesel-fume bar band on overdrive and a voice that wavers somewhere between a hug and a left hook. Hymns For The Dying is the culmination of years of displacement, rebuilding, and multiple attempts to settle down.

Why we love it? Haunting and resplendent this moment of contemplative Americana is rich with experience. Butler’s voice trembles with the history of canyons, rivers, and highways, a man who has drunk in last chance saloon. (Bill Cummings)