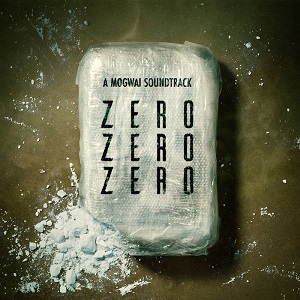 Mogwai were always destined to do soundtracks and do them well. It was obvious from ‘Mogwai Fear Satan,’ the heartbreaking, epic final track on their still-staggering debut Young Team in 1997 that their music would lend itself to documentaries and soundtracks to films and television. As the band approach their twenty-fifth (!) anniversary, they’ve shown that these soundtracks are works that stand up next to the ‘official’ studio albums (nine so far, and counting) and work well on their own, away from the visuals.

ZeroZeroZero is their fifth soundtrack work in total (and they have collaborated on two further soundtracks: The Fountain and Before The Flood). It’s the soundtrack to the Italian crime drama of the same name, shortly to be shown on Sky in the British Isles. The band spent most of last year working on the record – it shows – and with the advent of the pandemic it has been made available to download for the first week on a pay-what-you-want basis from Bandcamp, with 50% of the first weeks royalties being donated to charity, helping musicians and healthcare workers.

That in itself might seem like enough reason to buy it, but what of the album itself? Inevitably, any band that has been around as long as Mogwai will produce work that is rated better than others, yet they have managed to keep an astonishingly high quality rating. The piano-led ‘Visit Me’ opens the album, making way for the electronica/driven paranoia of ‘I’m Not Going When I Don’t Get Back’ followed by the brief but beautiful ‘Telt.’ Other highlights from the record are the melancholic ‘Moon In Reverse,’ the childlike ‘El Dante’ and the reflective ‘Modern Trolls.’ The closing ‘The Wife Was Touched’ makes you wonder just how this drama will play out.

A certain beloved radio DJ once said of his favourite band that they ‘were always different and always the same.’ Said DJ wasn’t talking about Mogwai, though he championed them from their earliest days, but could have been. It’s in the band’s collective skill that whatever the mood or tempo of the song (and you’ll have gathered that these vary quite a lot) they always manage to sound distinctively like Mogwai. There’s the brooding, Scottish melancholia, common to so much – but not all – of their output. Sometimes it’s minimalist and quiet, sometimes furious and deafening.

It would perhaps seem unusual to suggest that a soundtrack album from a band could be a starting point, but then Mogwai aren’t like (m)any other bands. So, if you haven’t heard Mogwai before, there would be nothing to be lost (and much to be gained) by starting with this record. If you’ve always loved Mogwai, this record will be yet another confirmation of why they’re one of Scotland’s greatest exports.