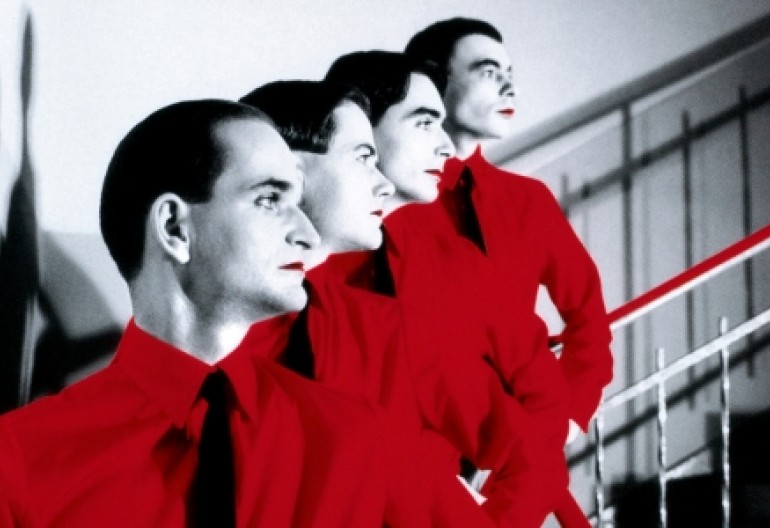 So, they were human after all. Kraftwerk legend Florian Schneider died last week at the age of 73 (see our obituary here), and for those of us who grew up on Kraftwerk and their children, for whom Kraftwerk were our Beatles and Elvis and Sex Pistols all rolled into one, it’s a big, big loss. So what better time to put together a Kraftwerk Starting XI, and a somewhat belated one at that – all of us who write for GIITTV deserve a slap on the wrist for not having done this already. Maybe because it’s a difficult task – despite the relative brevity of their back catalogue, Kraftwerk’s quality control was obsessive and ruthless, and they never did filler, which makes choosing eleven songs a bit of a challenge…

Following two albums of fairly generic krautrock that did little to hint at the world-changing greatness to come, Kraftwerk’s 1973 album Ralf & Florian saw them change tack and release their first ‘real’ Kraftwerk record, a gentle, mostly ambient collection of pretty electronic pop that redefined their direction. It’s an endearingly naive, occasionally clumsy record – they’re audibly getting to grips with the technology – but the likes of ‘Kristallo‘ still manage to sound startlingly futuristic. Was anyone else doing acid house basslines in 1973? Of course they weren’t.

And so, in just under 23 minutes, they changed the world. British TV viewers’ first exposure to ‘Autobahn‘ was not on Top of the Pops but, appropriately, on weekly science/tech roundup Tomorrow’s World – appropriately, because ‘Autobahn‘ was to become the template for much of pop music for the next, ooh, 45 years. That subtle nod to The Beach Boys‘ ‘Fun Fun Fun‘ tells us that this is a new kind of road music, a statement that European imagery can be just as – if not more – evocative than the American rock & roll tropes of the 50s and 60s, much to the delight of us Europhiles/Yankophobes.

Early reactions to 1970s electronic music often focused on its supposed coldness and lack of humanity. “For Gods sake, keep the robots out of music!” raged a particularly fuckwitted Melody Maker review of the time. And yet whilst Kraftwerk were – and still are – seen by many as the embodiment of cold, futuristic robo-pop, they were arguably the first to make machines feel. Just listen to ‘Kometenmelodie 2‘ (from the Autobahn album), a soaring, uplifting, almost dizzying piece of pop music that has as much soul and emotion as anything else being made at the time.

Kraftwerk’s love of technology did not blind them to its darker side – witness the alienation of Computer World or ‘The Robots‘ for example – and 1975’s Radio-Activity album is an early example of techno-fear, both a hymn to the radio on which you’re hearing their songs and a slice of nuclear paranoia. Its stark electronic melody and dread-filled lyrics (“Chain reaction and mutation/Contaminated population“) no doubt contributed to a spike in sales of “Atomkraft? Nein Danke!” stickers at the time.

On 1977’s Trans-Europe Express, Kraftwerk started to drift away from their experimental roots and begin making something that was identifiably pop music. Arguably their finest album, it begins with the stunning, evocative ‘Europe Endless‘, a hymn to the old continent (“Parks, hotels and palaces…Elegance and decadence“) and another attempt to shift contemporary music’s focal point away from hoary old Americana. Not only Kraftwerk’s crowning achievement but, in this writer’s opinion at least, the greatest song of its decade.

Whilst it’s hard to imagine messrs Schneider & co strutting their stuff down at the local disco, 1978’s The Man-Machine is steeped in late 70s electro-disco, albeit shot through with their trademark weltschmerz and alienation. ‘Spacelab‘, with its throbbing electronic bass and pulsing beats, would be a huge influence on the early techno pioneers of Detroit and Chicago a few years later, and is the perfect sublimation of the band’s futuristic/melancholic aesthetic.

As well as inventing synthpop, Kraftwerk invented internet dating. Yes, if you’ve ever found love online, you have Florian Schneider to thank. 1981’s Computer World album, the band’s most commercial, was a musing on the rise of the computer, with all the good and bad that that entailed. ‘Computer Love‘ has a lonely man seeking romance via his computer to a gorgeously sad electronic melody that suggests computer love probably won’t make him feel any better. Alarmingly prescient.

The squelchy, body-popping beats of this one-off single found Kraftwerk an unlikely new audience in the huge breakdance scene of the time, and it remains probably their most danceable three minutes. And what better subject for Kraftwerk to write a song about than a sporting event that is both venerable European tradition and pioneer of cutting-edge technology?

1986’s Electric Cafe album (rereleased in 2009 as Techno Pop) had a somewhat long and painful gestation, due both to the band’s perfectionism and Ralf Hutter’s 1982 cycling accident, and is generally seen as their weakest. To which I say bollocks – it’s a beast of an album that shows both the band’s playful, experimental side (side one of the album is largely instrumental hip-hop) and their pop side. Opener ‘Boing Boom Tschak‘ is as cutting edge as anything else that was going on at the time, and for all the criticism the album received, its influence was huge – just listen to Depeche Mode‘s ‘Strangelove‘, Pet Shop Boys‘ ‘Shopping‘, or New Order‘s ‘1963‘, all released the following year and all steeped in the sound of Electric Cafe.

I’ll put on my crash helmet before writing this but I love 1991’s generally disliked The Mix album, on which the band remixed/remade several of their songs for the dancefloors of the early 90s. Yes, it’s probably the only time Kraftwerk treaded water and allowed themselves to be influenced by the zeitgeist, but it’s bloody brilliant, and this crisp, bleepy, funky reworking of 1978’s ‘The Robots‘ is, for me, the definitive version thereof. OK, you can throw stones now.

You may also be surprised when I tell you that 2003’s Tour de France Soundtracks is my favourite Kraftwerk album, but it most definitely is.  A sleek, throbbing techno beast of a record that celebrates the Tour’s use of technology whilst also paying homage to its traditions. ‘Aero Dynamik‘ is built on possibly the greatest bassline ever recorded, and is a hymn both to Europe’s greatest sporting event and to the band itself (“Perfection mechanique…Materiel et technique“).