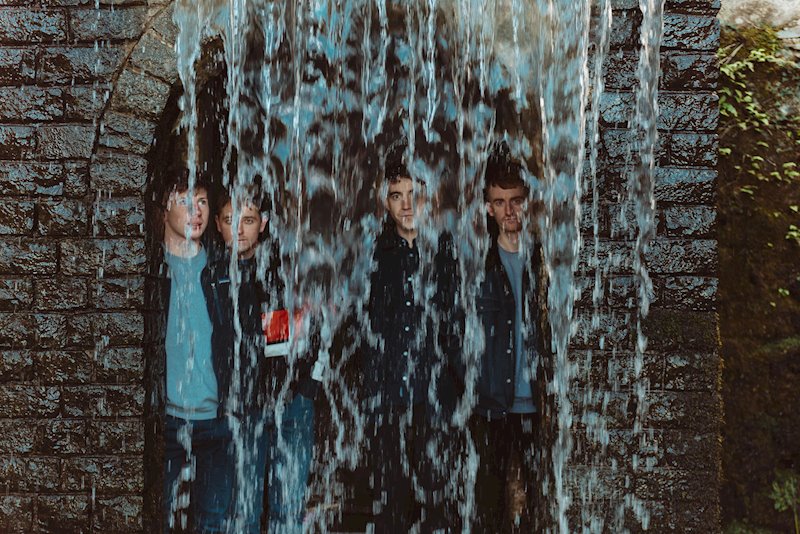 Map Meddwl is an album which offers a warm technicoloured sound but with a sunkissed swagger, and wrapped in a kind of slacker garage-band rock, with  heartfelt melodies and warm rich harmonies.  All complemented by the dulcet bilingual Welsh/English tones of Wyn.

Having previously released a debut Colli Cwsg EP (2014) and album Toddi(2017), they have received much acclaim in their homelands and beyond, including support from the BBC with the band part of Radio Wales Horizons 12 Project in 2015, with a Maida Vale session recorded the same year, and continued support from Huw Stephens (BBC Radio 1). Over the last five years they have performed at a number of high-profile festivals including T in the Park, Sound City, Swn Festival, Truck Festival, and Festival No. 6, as well as playing with BBC Pops Orchestra at Eisteddfod (2017).

Map Meddwl was recorded in Sain Recording Studio with Ifan Emlyn and Osian Huw. It was mixed and mastered by Eddie Al-Shakarchi.

– This is definitely a pop song, and I fell in love with the trancy/spacious vibe. We aren’t traditionally a synth band but for this album we wanted something different, so we went a bit crazy on Facebook and bought one of the first synths we saw, we’re just lucky that Trystan is a bit of bargain spotter. The song pulls on the similarity’s between romance and the ’United’ Kingdom. The idea of dissolving a political union is very much like breaking up with someone, it might be tough to start with but eventually you’ll build yourself up to be a better person. Welsh independence it something that we really believe in, and I’m especially fond of writing about it! It was the third single before we released the album. Excluding odd verses this is the only English song on the album. We could’ve easily written Welsh lyrics for it as it comes more naturally but I think it’s important to include English songs in order to broaden the audience a little bit.

– We’re big fans of jingly jangly dreamy music, such as Real Estate, Smith Westerns or Kurt Vile, and I think you can definitely hear those influences in this song. I recently bought a Danelectro 12 stringer, and I wanted to flood every song with this amazing
shimmering sound, but the rest of the band managed to tame the guitar to just a couple of tracks, including this song. It’s a song about surviving a break-up, with the chorus lyrics being “Bydd blodau hardd yn balguro ar fedd dy galon di” literally translating to “Pretty flowers will bloom on your heart’s grave”.

– Co-written with my fellow
housemate/friend of mine, Gwyn Rosser, lead vocalist of Los Blancos. Being in University together, and 3 years later still living together, we’ve been making music together for several years, it was just a matter of time until we put something down on record. I wanted to offer and introduce something different in our second album and being in the same house as Gwyn it was actually quite hard not to write a song with him! The song is about brotherhood and about our time together as friends.

– I wrote this song in Aberystwyth about a year ago as a part of this dance/music project that I was involved in. The project involved myself and 3 other contemporary dancers. We were mainly stuck in this some sort of dance studio for a week, and I especially remember it being extremely warm. Luckily enough we had one day off in the middle of the week, so I decided to walk to Pen Dinas, this amazing spot in Aberystwyth that overlooks the sea and village itself, to write some lyrics. I remember it being very peaceful and the sea was extremely calm, therefore it was just an easy spot to escape from everything.

This was probably the first song that we wrote the album (excluding Galw Ddoe Yn Ol that we released in 2018). I consider it as some sort of bridging song from album number one to album number two, it still holds a particular drive that the first album had but with a new sense of urgency and dreaminess to it. Really looking forward to play this one live!

– This is one of my favourites from the album, I think it’s very magical and it can take you to somewhere out of this world. We really enjoyed experimenting and just playing around with different synth sounds and an actual vintage Rhodes (!!) which you can hear all the way through the song. The lyrics was written by a poet, and good friend of mine Carwyn Eckley, who wrote the lyrics for ‘Toddi’ on the first album. Carwyn has a way with words that nobody else has, he’s really mastered the transition (if there even is one!) from poetry to lyric writing. The song itself is about change and that life is what you make of it, so don’t linger on decisions and make the most of your opportunities.

– This was the first single that we released as a part of the album campaign. I remember that musically the song could’ve gone a number of ways. Initially Trystan the bassist wrote the opening riff then I remember it somehow got out of hand and developed into this absurdly long song that had about 4 different parts to it. But thankfully we managed to bring ourselves back to reality in order to adapt the song into a single.

We wrote this song back in 2018 after releasing the first album. I wanted to include it on the album because I thought it was too good to leave out ha ha. Luckily, it’s been included on Spotify’s Dreampop playlist and by now is one of our most popular songs. It’s probably one of the more positive songs on the album, it being about the power that the sun holds in terms of influencing positivity and making someone feel happy. I’ve always been interested in the sun and how it effects your mood. I think we’re dependent on sunlight, waking up to a bright sunny day can be very uplifting, while dark clouds can make you feel hopeless and depressed.

– Even though the song is split into two on the album, it was written as one. This one was really fun to record and I’m really looking forward to playing it live. We especially enjoyed playing around with the Vocoder on the microkorg. Lyrically the first part of the song is about routine and how you can easily fall into the trap of repetitiveness. I remember being on the way to work one day and I especially remember looking at the doom and gloom that was on every single face that was passing by. It’s important to push yourself in life and introduce some sort of change once in a while. The second part is the answer and the meaning of life. Following Wales on football away days. As a group of friends we often refer to the away trips as recruiting to the army in order to serve your country, which is ironic because I definitely consider myself to be a pacifist. Corpral Caru Cymru is therefore nickname we’ve given to our chief in command and actually, anyone that follow’s Wales on football trips.