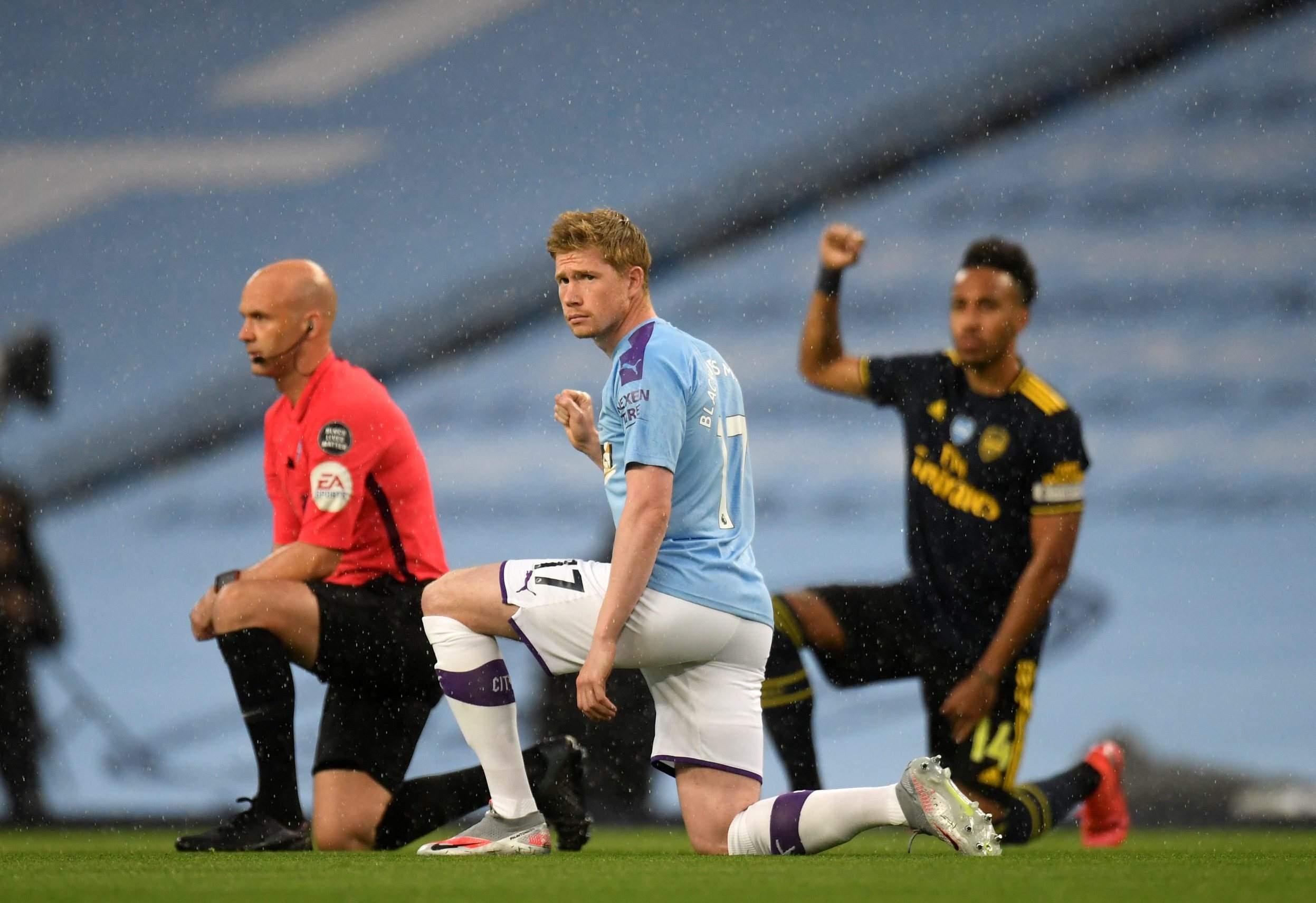 As the Premier League returns, this is the first in a new series in which James Turrell looks at the week in football.

Football returns in its purest 21st century form. Once the majority of English’s clubs revenues came from TV and sponsorship, and not from game-attending fans – football became something akin to global TV phenomenon, closer to Game of Thrones than the Sunday league. People have often said that football without fans is not football, a soulless sham with the substance of a long-dead ghost. But here we are – football across Europe played to empty stadiums, filled with logos and the eerie imposition of crowd noise recorded from previous games.

In some sense, this is where football was always headed – teams from the Midlands not playing for their locals but the fans sat in their local in Beijing. And the Premier League now belongs to them as much at it does the people of England – a kid in Jeddah who supports Southampton from five years old is as equally valid as somebody is actually from Southampton. Nobody should besmirch them, they follow football for the same reasons we do; joy, despair, community and (occasional glory). If the Premier League wasn’t as reliant on TV money as helpless half-ling, then maybe we wouldn’t be in this position – watching ghost football to stop it all from dying.

Coastlines collapse, epochs fall, civilizations crumble beneath relentless pathogens but there is one constant in life: David Luiz’s defensive liability’s. Arsenal began the league resumption in a historically paltry 9th place but still only 5 points off 4th and perhaps most importantly, 3 points off 5th. Manchester City’s (supposedly) dodgy dealings have left them with an impending two-year ban from European competition, which they have appealed to Court of Abritation, with the verdict expected in early July. This leaves 5th place being a Champions League berth a tantalizing prospect for many clubs: remarkably, at the league’s resumption, only 8 points separated Everton in 12th and Manchester United in 5th.

All to play for then. Even for Arsenal, whose decline looks increasingly terminal with each passing half. They began on Wednesday 17 June against City themselves and for the first 20 minutes, they were decent. It was an understandably slow and sluggish start; defiantly disjointed with a few flashes of cohesion. The lack of intensity in City’s press allowed Arsenal to impose themselves more on the game than perhaps they ordinarily might have – playing riskier, penetrative through balls that lacked quality but at least suggested intention. After 20 minutes both teams had had 50% possession.

And then, after a 24th injury to Pablo Mari, came the hulking ineptitude of Luiz. He played like an alien trapped on Earth, desperately trying to avoid capture by posing as a professional footballer.  A fairly innocuous through-ball was defended with all the solidity of melted jelly, as it cannoned off his thigh for Sterling’s first goal of 2020 on the cusp of half-time. The piece de resistance came on minute 49; Riyad Mahrez knocked the ball passed him with ease, Luiz pulled him down in the box with no attempt to play the ball. Red card. Penalty. We should be thankful to Luiz, even Arsenal fans facing a familiar desolation, reminding us that in the constant chaos of Covid-19, life is not really that different. Arsenal compounded the 3-0 defeat to Man City with an expressive by ultimately guileless 2-1 defeat to Brighton, where the familiar pattern of missed chances and defensive frailties were once more on show. They have 8 games to overturn 6 points, not insurmountable but Arsenal remain clinically unconvincing.

Leicester City, the fabled champions of 2016, are still on course for the bright lights of Europeans nights after an excellent season saw them resume in 3rd place. Only four wins in 11 games after Christmas left their season appearing shaky but they were still 8 points clear of 5th when lockdown started. Their first game back was a trip to an empty Vicarage Road, taking on former manager Nigel Pearson’s tough tough boys Watford, the only team beat Liverpool in the league this season. This was an ultimately sloppy game defined by aimless balls and low intensity. Leicester were marginally better, managing to create sketches of the passing patterns that have marked their season but always faltering when creating actual chances. Watford were remarkably solid and well-drilled; two banks of four sitting deep and offering Leicester little room to work. They were effective on the counter-attack, creating the most chances – with Abdoulaye Doucouré and Troy Deeney both missing big opportunities. Leicester thought they had the game won when in the 89th minute, a beautiful Demari Gray ball was floated to Ben Chilwell whose first touch took him inside the the far edge of the box and his second sent a fizzing bolt of a finish off the post and goal bound. But the 92nd minute saw a chaotic corner end with defender Craig Dawson performing an impressively nimble bicycle kick to earn a deserved point.

Manchester United began the resumption in 5th, having shown a definite improvement with the signing of Bruno Fernandes. They began with a blockbuster tie against Tottenham, coached by their sullen Gothic former manager José Mourinho. This was a somewhat absorbing 1-1 draw, as each team started cagily, firmly testing each toe before diving on. A terrible David de Gea mistake allowed Steven Bergwijn’s average shot to glide past his outstretched body. Paul Pogba’s introduction in the 62nd minute for his first start in 2020 gave a glimpse of his potential partnership with Fernandes; with him providing the steady, cultured reassurance and Pogba, as evidenced by his delightful skill in skipping past Eric Dier, moments of intangible magic.

Chelsea in 4th place are favourites, along with Leicester, to gain the two European places. Frank Lampard’s first season in charge has been a mixed success; in the top four, playing nice if traditionally structured football but utterly humbled by Bayern Munich in the Champions League. They have a good squad, their two substitutes – Christian Pulisic and Oliver Giroud – coming of the bench to score both goals in their 2-1 victory against Aston Villa. The imminent signing of Timo Werner is an excellent deal and suggests a push towards a title challenge is possible but Lampard still has huge question marks over his capacity to manage at the super-club level.

With Sheffield United drawing and losing in their opening two games, their tilt at a Champions League fairy tale looks over. A bizarre, disgraceful (but also obviously hilarious) VAR mistake cost them the game against Aston Villa and with it, the chance to force Messi to sleep somewhere in Nether Edge. That leaves Wolves to the lead charge of the unassuming Midlands clubs and traverse the upper echelons of footballing glory. Their 2-0 victory over a poor West Ham leaves them level on points with Man United in 6th, 5 points of Chelsea in 4th. They remain the most joyous team in the league; a progressive, ball-playing unit running on the sweet sweet energy of history. With their Round of 32 Europa League tie in the balance against Olympiacos, they have the potential to complete a season not seen in the West Midlands for half a century.

Where does this all leave us? Does the tight positioning between these clubs suggest the Premier League’s strength or weakness? We seem to be entering a period in which the top 6 will no longer be the homogenized mass it has been, with notable exceptions, for the past 20 years. I think for the foreseeable future, we will see cycles where one or two teams dominate the race for the title and the rest of the European places are, to some extent, open-season. The level of money in the Premier League is such, that what would be a ordinarily mid-table team – can with the right squad and manager (and a dose of luck) – have a season or two in which they can compete with super-clubs before returning to their norm. This could be the a period of fluidity in which smaller clubs have shot at starry nights under continental skies. Or, maybe in reality, the Coranavirus will do for football what it is going to do for the rest of society – revert to us a very mean mean.