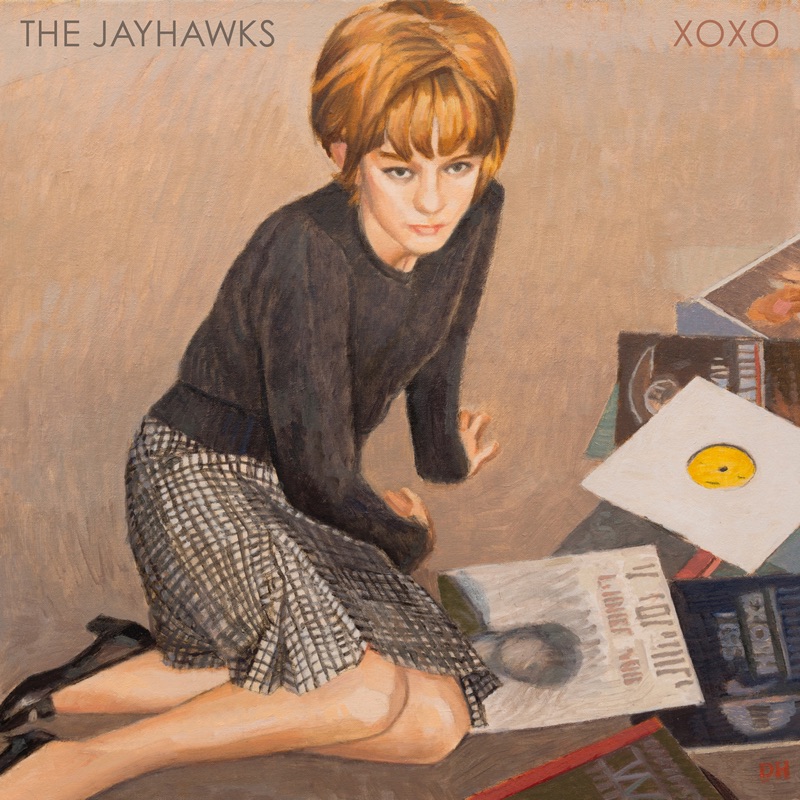 Almost 28 years ago, The Jayhawks released the seminal album Hollywood Town Hall. The only problem with that scenario was that it was practically impossible to top it. They’ve gone on to release many great long players since then, but while they came close several times, they never QUITE managed to outdo themselves. But you know what? On XOXO, they’ve only gone and achieved the seemingly impossible. The ‘free for all’ arrangement – each member has thrown at least one song into the mix – has paid dividends.

Even just looking at the beautiful artwork – an image of a pensive looking young lady sitting amongst a selection of vinyl records spread out over the floor – you get the impression that this is going to be a special record. Which, of course, it is. And then some.

Within seconds of spinning XOXO, we are met with the glorious Byrds meets The Band wistfulness of ‘This Forgotten Town‘, finishing with some guitar squawling reminiscent of some of Drive-By Truckers‘ best work, whereas ‘Dogtown Days‘ evidently takes its cues from late eighties R.E.M. It’s a stunning double whammy and it only gets better with Gary Louris’s Steely Dan-like ‘Living In A Bubble‘, which also has shades of Jackson Browne about it. Then Karen Grotberg’s ‘Ruby‘ brings things down to a gentler pace, vocals evoking memories of Karen Carpenter, perhaps covering a Joni Mitchell song.

‘Homecoming‘ recalls both Crosby, Stills and Nash, and The Beach Boys, and ‘Society Pages‘ unwittingly borrows and updates the chord sequence of the Smashing Pumpkins hit ‘1979‘, yet still ends up sounding unmistakably Jayhawks. The unusual guitar motif in the middle of this one is as surprising as it is effective. ‘Illuminate‘, on the other hand, wouldn’t have sounded out of place on Sparklehorse‘s 1995 debut album Vivadixiesubmarinetransmissionplot.

If there’s any criticism at ALL to be levelled at XOXO, it’s merely that the music is just SO mesmerising that you don’t really pay much attention to the lyrics. Not a note is misplaced here – it’s like being massaged by melody, and you feel utterly refreshed by the time it’s finished. But it’s worth forcing yourself to take in the words, if you can, for this is a band who’s always come up with the goods where wordsmithery is concerned. The Motown styling of ‘Little Victories‘, which also nods to Cream, is a case in point: “Father, dear father, help me understand. Tobacco-stained fingers, whiskey in your hand / Did you ever feel so all alone?
Did you fight the darkness on your own?” – deep stuff, but invigorating too.

So congratulations to The Jayhawks. If anyone beats this album in 2020, I’ll eat my own XOXO.

XOXO is out now on Thirty Tigers.