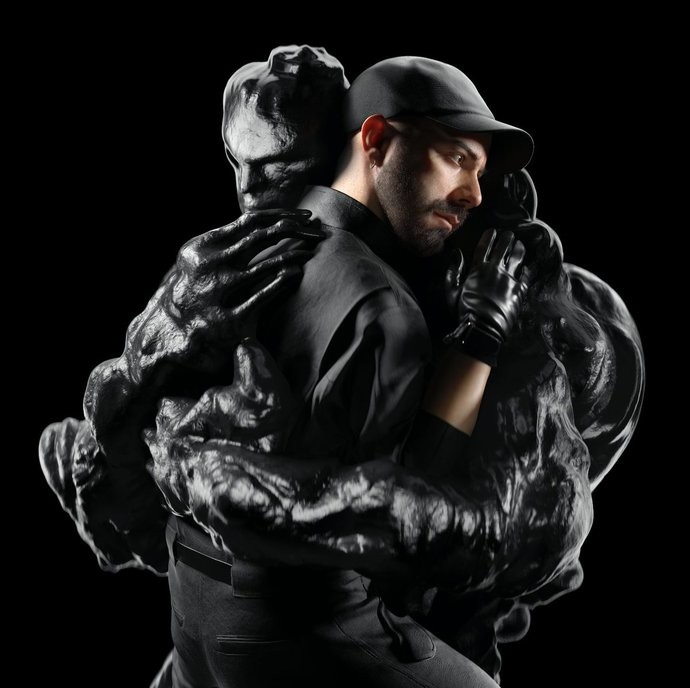 Adaptive Minerals – A Gift from Earth. A solution for Tomorrow. This innovative company produce 100% of the world’s Alternate Sulfur, a variation of the essential substance that’s made in their laboratories and that will “improve mankind by coming back to its deepest routes.” They make 983 Million US Dollars in revenue over the year and have 256, 312 satisfied partners around the globe. Isn’t that amazing? Well…not really, because it is not real. Actually adaptiveminerals.com is the website of a fictional company (think Total Recall and the Umbrella Corporation) created by multi-disciplinary artist Yoann Lemoine as a visual social commentary aid to his second album under the Woodkid project. S16 – the chemical symbol and atomic number of sulfur, takes us into the world of industrialism (through terminology, music videos, the artwork on the singles’ sleeves and the metallic production), environmental ignorance, as well as man’s attraction and repulsion to destruction. Sulfur being an essential element within life and manufacturing (all the way back to its use in caveman paintings) but a fragile substance which is likely to explode and fuel hell, if taking the biblical sense literally.

The otherworldly and R&B wooziness ‘So Handsome Hello’ (a surprising shift for Woodkid, sounding like a combination of Glass Animals and Tamino) takes the attraction to danger and puts a sexual twist to it. “You are the devil Romeo. If you want devotion, you can have it all. Come on big boy, take control. You are my demise, you are my downfall.” ‘Drawn To You’ also warns of magnetic hazards but the setting imagines a more nocturnal oriental setting with will-o-wisps calling over the victim like a mischievous siren.

‘Goliath’ and ‘Minus Sixty One’ question the significance of an individual responsibility versus larger seemingly unstoppable force. The majestic and boldly produced opener ‘Goliath’ introduces listeners to the rigid industrial sounds that feature heavily in Woodkid’s new production. His trademark dark swaying orchestra is paired up with a triad of metallic electricity sounds, that could be described as a ball jumping inside a reverberating drum, sparks of voltage and the chopping of steel tubes. “How could you be so blind?”, “Now you’re dancing through the smoke like nothing else matters” and “You’re playing your best role but the mask shatters”. Mechanical terms operate as metaphors in the lines “the chest and the head divided by a white laser” and “the pattern of mad strobes, you’re going haywire”, which are about the inequality in social statuses.

The magical ’Minus Sixty One’ – which has a style reminiscent of an epic fantasy game and is one of two tracks to feature the Japanese-language children’s choir Suginami Junior Chorus – seems to be from the point of view of a wealthy businessman who after playing ignorant for a long time (a similar narrative to Everything Everything’s ‘Big Climb’)  is developing a guilty and panic-striken conscience as he sees the comfortable paradise around him catastrophically flood and freeze up. “Do I deserve what I’ve got? I’m on a million dollars worth of stock. But I still don’t sleep at night.” The selfish millionaire is caught in two minds at whether to continue making himself rich with his ecologically-damaging schemes or to help the planet. The Japanese choir sing his choices: “Uchū tengoku ka”. (Universe or heaven?)  ‘Reactor’ is the other track featuring the Tokyo-based collective. Like the former track they shout out a random array of numbers in an almost military-style, this time around nordic-fluttering strings, while Woodkid uses factory-terminology as a play-on-words for responsiveness.

‘Highway 27’ also displays a refusal to accept responsibility. On the track that mixes choppy electronica with the steel-sound of Kulintang – a gong-produced genre made recently famous by Canadian-Filipino assemble Pantayo – it has a hit-and-run-style story in which the protagonist says: “Now drive away and let it die.” The line “no shelter in your arms” sounds rather cowardly in that context but develops a different meaning when paired with the album cover (showing Woodkid hugging a “thick black haze” as mentioned on ‘In Your Likeness’ ) as well as the lyrics on the piano ballad ‘Horizons Into Battlegrounds’. The simplistic piano ballad sounds like a genuine call to help. “Your embrace clears the storm in my head / I only welcome care when I’m wounded. / I cannot walk ahead without your guidance. Can I hold on to you?” Yoann Lemoine’s vocals were distinctively rusty on debut The Golden Age but they have cleared up to sound beautiful on here as well as growing closer to the style of ANONHI on ‘In Your Likeness’.

‘Enemy’ and Pale Yellow’ are about self-destruction instead of world mayhem. ‘Enemy’ features a knocking metal percussion as Yoann Lemoine seemingly talks to himself: “My body may take it but my mind is weak. Why do I love becoming my own enemy. Self-destruction draws patterns in me. It will bring us down I don’t know why” ‘Pale Yellow’ could be detailing the colour of the aforementioned sulfur but the song focuses on an addiction to antidepressants and the urge to handle your problems without medical guidance: “I will fix the pain on my own.” Lemoine described the idea of a person’s internal machine in an interview and this idea is made more alive by the addition of malfunctioning computer sounds (a Sevdaliza-vibe) and the hard drilling metal of the beats.

The idiosyncratic marching drums from Woodkid’s previous record may have gone and the album’s concept isn’t always strong as it could be but Woodkid’s production is as just as creative, original and spellbinding, even after 7 years away from this project. With the clarity in his vocals adding further beauty as well, the French musician’s career will continue to burn brightly, I guess just like sulfur.