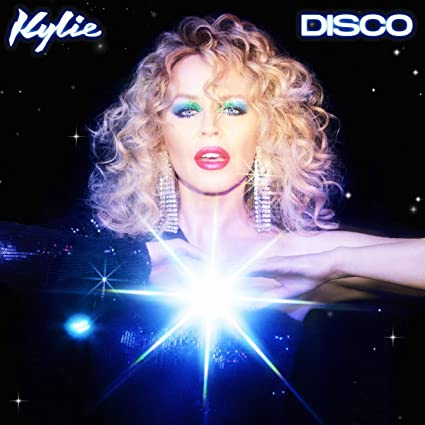 Kylie‘s 2018 album Golden was a strange beast.  The first half featured a series of half-baked country pop songs, the much stronger second half saw her ditch this approach and focus on the dance-pop she is best known for.  Before listening to a single note of her 15th studio album Disco, I was already sold on the concept.  The idea of Kylie trying her hand at a focused, dance inducing disco record is an exciting proposition.

‘Say Something’ is a glamorous lead single.  Itchy, bubbling keys, a lazy, sunny lead guitar and Kylie’s natural, carefree vocals add up to something of the moment.  Dua Lipa and Jessie Ware are currently dominating the mainstream with a similar aesthetic.  Kylie has enough experience in this area to easily ride this trend.  The excellent dance floor filler ‘Supernova’ is built within the same mould.  By zoning in on a classic disco flavour she is able to craft simple, perfectly structured pop songs.

The soft and mystic ‘Miss a Thing’ has a sexy, nostalgic quality to it.  Muffled, soft thuds provide an infectious beat for Kylie to vocally dance all over.  ‘Real Groove’ is unashamedly groovy and retro but with updated sensibilities to suit the palette of today’s pop audiences.  ‘Monday Blues’ is enough of a propulsive banger that I am willing to forgive the level of cheese it delivers.  Though it does make you wonder how much experience Kylie actually has of midweek drudgery.  I was not bowled over by the opening track ‘Magic’, one of the less good cuts on the LP.  Disco beats should inherently give a track a certain amount of oomph but this is oddly missing in the verses.  The choruses are well developed though, especially Kylie’s hooky, high reaching vocals. “Do you believe in magic?”

You can hear how Kylie has absorbed a lot of material from the late disco era on this record.   ‘Last Chance’ is pure Bee Gees with its funky walking bass line and spirited call and response vocals.  The strings on ‘I Love It’ and ‘Where Does the DJ Go?’ scream ABBA, though she does her own thing with it.  The lyrics across the second half of the LP almost exclusively revolve around dancing at the end of a night out and never wanting the night to end.  The idea that she could generate songs with this kind of celebratory energy in the middle of a global pandemic is commendable, even if it amounts to a fantasy in 2020.  “I didn’t get all dressed up for nothin’ (Nothin’)/ wanna chance another dance before morning.”  Final track ‘Celebrate You’ is a low key favourite of mine.  Melancholy, harmonised croons play out over punchy, drawn out beats.  “Everything I like about myself, is better with you”.

Without context, based on the music alone you’d never guess Kylie is an artist who has been grafting away for over 30 years.  By focusing on a simple, well executed premise, Disco provides a fresh, energetic listen that proves she is still very much part of the pop conversation.

Disco is out now on BMG.