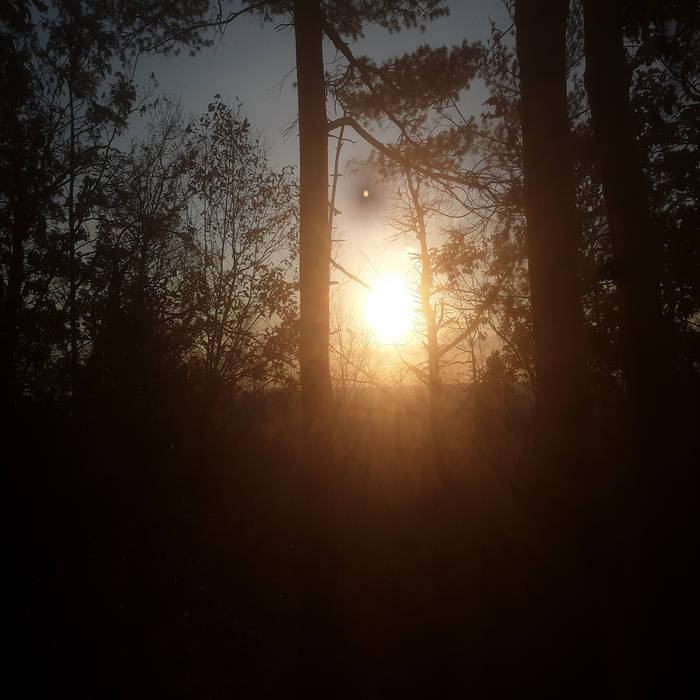 Looking at the album cover of Andrew Smiley’s debut solo album Looming as Light Torn doesn’t give a lot away. It consists of the tranquil sun gently setting. We see this through some trees, bushes and assorted plants. The sun has a warming glow to it. It creates in us an idea that what we about to hear will be pleasant and soothing. How wrong we are. Instead of dulcet tones we are welcomed with abrasive improvised guitar playing and slightly falsetto vocals. Those of you who seek something more conventional, skip to the album’s closer – a cover of Now, Now’s glorious ‘But I Do’. Someone Smiley manages to keep the pop sheen while maintaining his No Wave street cred.

The standout track on the album is ‘Part II’. Opening with an unrelenting barrage of guitar riffs and noise it just builds and builds into an ungainly seething mass of strumming. Occasionally Smiley’s vocals try and break through the dense maelstroms, but they fail. And this is what the track does best. It showcases Smiley’s guitar playing in a way that feels fun and exciting. Instead of wanking off solo, after solo, after solo he just hammers and strums his guitar for all it’s worth and creates a bloody lovely cacophony in the process. After the slightly underwhelming opening ‘Part I’ this is exactly what we needed. There is nothing wrong with ‘Part I’, except it just takes too long to get going and once at its destination has to head home immediately because it’s taken so long to get there. In a weird way it feels like the soundtrack to my teenage shopping experiences with friends. We’d spend so long in Top Man and River Island I’d only have 10 minutes in Our Price, MVC or Falcon Records before we had to leg it for our lift home. Which is a shame. Smiley is an inventive guitarist with a unique playing style. When he just goes at it, instrumentally, the results are much stronger. Around the halfway mark of ‘Part II’ things slow down a bit. This break gives us a chance to catch our breath, but a lot of the fun is lost from the track.

While Looming as Light Torn is an improvisational guitar album, and as such it doesn’t get, and shouldn’t be, judged the same way a conventional ‘guitar’ album would be, the main problem, much like this sentence, is that it takes too long to get going. While there is nothing wrong with taking your time and building momentum there needs to be a pay-off. When Smiley gets to his point it doesn’t work as well as we’d hope. Yes, parts of the album are fantastic. The little solos and runs five minutes from the end of ‘Part I’ are delightfully playful though you kind of wonder why they didn’t appear sooner and for longer. The directness of ‘Part II’ is to be admired. It just comes for you out of the traps, and the way Smiley’s vocals rise as his guitar does is great. The way he contorts his guitar to make incredible squeals and drones is glorious to listen to, and I’d love more of it, but getting there was a bit a of a chore. Ironically ‘Part I’ could easily have been pared down to just the instrumental wrenchings and ‘But I Do’ could have had its vocal sections extended. Ultimately Looming as Light Torn is a fun album that No Wave and experimental fans will delight in. It contains some pretty vibrant ideas and killer guitar playing. It’s just a shame that some of the enjoyment is lessened by pacing issues. Saying that, ‘Part II’ definitely makes up for the opening’s sluggish start.