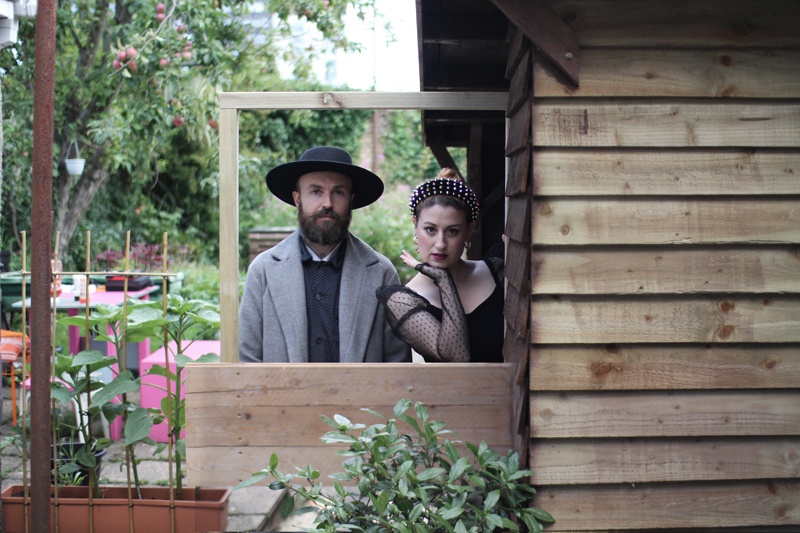 When BBC Radio Cymru commissioned HMS Morris to record new songs for their ‘Sesiwn Ty‘ house sessions/sessions from home strand at the start of lockdown number one during spring, it spurred the band into action.  Precisely  the thing they needed, according to songwriter, singer and guitarist Heledd Watkins.

‘The session set the tone for writing for the rest of the year really,’ she tells me over the phone from her and Sam Roberts’ (bass/ synth/ loops/ backing vocals) home in Cardiff.

2019, either a year ago or several decades depending on whether you view it through the constraints of the pandemic lens, saw the experimental and all embracing art rock band’s second album ‘Inspirational Talks’, like its predecessor ‘Interior Design’, nominated for the Welsh Music Prize. And that autumn had them take in the delights of Japan, and Birkenhead’s inaugural Future Yard festival.

But like most artists these last 10 months have been online activity mostly. The good news is, a 5-track EP ‘Pastille’, written over the course of the last year but recorded here in 2020, is released tomorrow (Friday 4 Dec).

As we talk, Sam recalls the house being turned into a studio as they made the EP, and how they both took a relaxed attitude to the lockdown experience.

‘For us it was a real freedom at the start,’ he admits. ‘There was nothing you were supposed to be doing instead of making music.’

This morning the pair are taking a quick break from filming the video for ‘Myfyrwyr Rhyngwladol’ (International Students) from the EP. They’ve been out and about around City Road in Cardiff, where they live. The song, I’m told, started as a reaction to the area taken over by the 21st century urban blight that is the expansion of student accomodation.

‘They are ugly,’ is Sam’s firm analysis.

‘Not the students, the buildings!’ Heledd laughs.

I put to them that ‘Myfyrwyr Rhyngwladol‘ has an interesting spin on how we view students in our cities across the UK in modern times. We’re so accustomed to signing petitions about student flats replacing buildings and altering landscapes we hold dear, sometimes we forget – how does one put it – that students are people too.

‘We’re thinking more about them as people, it is a brave thing to go to a new country,’ says Sam of the song. ‘It’s adventurous, embracing or involving yourself with another culture and putting yourself into their story. And also you’re at that time in your life as a student where you’re learning, you’re there to learn and you’re open to new ideas and developing yourself. It’s an approach to life it would be good if people maintained for a bit longer in their adult life, we thought.’

I share a personal memory of when I first moved to Liverpool to go to university, as a wool from the Lancashire sticks and having ‘fuck off back to where you come from, student’ bellowed at me from a charming local. Things have change since then, native populations are more welcoming and canny about what students bring with them, economically at least.

‘You cling on to what you’ve got,’ reckons Heledd of the those resenting the student accomodation. ‘You’ve worked so hard to get to your house, your family, everything, so if anything interrupts that then you automatically think bad of it. But it’s good to know why these things are happening around you.’

The EP has gifted us a bright and shiny end to the year, the songs ‘Babanod’, ‘Poetry’, ‘Myfyrwyr Rhyngwladol’ and ‘Partypooper’ deliciously drip fed to us over these last months. It’s a collection capturing the band’s view of the world as it is around them at the moment.

Supreme latin-electro-pop banger ‘Partypooper’ on the EP was recorded at home, like the rest of the songs, but a spirited escape to North Wales  to record brass courtesy of Owain Gruffudd and Gwyn Owen from Band Pres Llareggub (Owain also arranged the brass) when lockdown eased a little, turned this reflection of imposter syndrome into what Sam describes as ‘a full party’.

The up nature of the music is juxtaposed with the lyrical theme, and proves highly effective. After all, who is in the mood for picking at the scab of negativity right now.

‘It started from the thought that musicians when they don’t have gigs or releases get a bit depressed and miserable. And they need a fix of being adored on stage to feel good about themselves. It’s all about that depressive patch and the little voice you have in your head telling you that  you’re not good enough or you should go and do something else,’ says Heledd.

‘And at the same time you’ve got to put on that front of cheeriness,’ adds Sam.

On ‘Poetry‘, HMS Morris explore the nature of obsessive love, but through the eyes of a serial killer. Heledd was listening to a podcast about the Golden State California killer, who committed a string of murders, rapes and burglaries from the early 1970s to mid-80s. The week before the kills he would go and look through potential prey’s windows and savour what was to come.

‘So there’s a bit in the song about going over to this person’s house you are completely obsessed with and just staring at them through windows. It turned from a serial killer thing to an obsessive love thing. Yeah. Don’t know to say about that one….’

Beginning with a Portishead-sian crackle of vinyl, the repeated insistent vocal, Heledd providing a ghost-choir behind it all, stalking has rarely sounded more theatrical.

‘I thought from the start it was something quite operatic, orchestral somehow. To the sentiments, maybe,’ says Sam. ‘I thought it would be fun to build it up in the way Ravel built up Bolero, so there’s this one repeat thing. A bass line that builds up and builds up a bit like an obsession repeating the same thing, it gets bigger and bigger and bigger then by the end we’re screaming over the top of the guitar which is also screaming.’

HMS Morris like the rest of us, look forward to the promises next year will bring. The future dangles twinkly glittery prizes for us out of reach for now, but they are there. The band have been accepted onto the INES Talent European festivals programme. Selected by FOCUS Wales, they anticipate playing festivals across Europe. Reminiscing on the last gigs we went to is a common conversation to have; they last played back In January. ‘It’s like another lifetime, when we were kids!’ Sam reflects, the performances taking on a romantic mysticism, rose tinted specs firmly worn.

‘I feel like I’ve forgotten how to do it, play live. We’re going to have a lot of rehearsals beforehand!’ jokes Heledd.

Over the past two years ,aside from the band, she has been involved in workshops for young women and girls who want to learn how to write songs and play instruments with other women. The project couldn’t run in its usual form this year so it morphed into an online magazine where different women contribute art or songs.

Heledd wanted to do a collaboration on a song with Welsh Language Album of the Year 2020 winner Ani Glass and Bethan Mai from Rogue Jones.

‘I’m not a big collaborator, I write on my own and pass things on to other people. So it was quite exciting, but we were all in our separate houses sending thing to each other. We finished a song and it’s coming out.’

She and Bethan wrote together, with Ani on production and mixing duties, each operating remotely. ‘Syniad o Amser‘, by the collective Kathod is out on 4 December on Bandcamp (https://kathod.bandcamp.com), with money raised going to Welsh Women’s Aid.

‘I’ve always wanted to work with other women in the SRG (Welsh Rock Scene), but have been too nervous to ask! But, this magazine and boredom during lockdown was the perfect chance to go for it. I’ve always been a huge fan of Bethan and Ani’s work, and I’ve seen them performing live many times, so it’s been a huge privilege to work with them.’

She sees the Kathod line-up as fluid.

‘That’s the hope for it. Everyone is so busy at different times, it’s be very slow moving if it was just the three of us!’

The Merched yn Gwneud Miwsig zine, which inspired the Kathod project, is available to read and download from issu.com/mygm and on Instagram now.

The ‘Pastille‘ EP by HMS Morris is out 4 December via The Bubblewrap Collective.