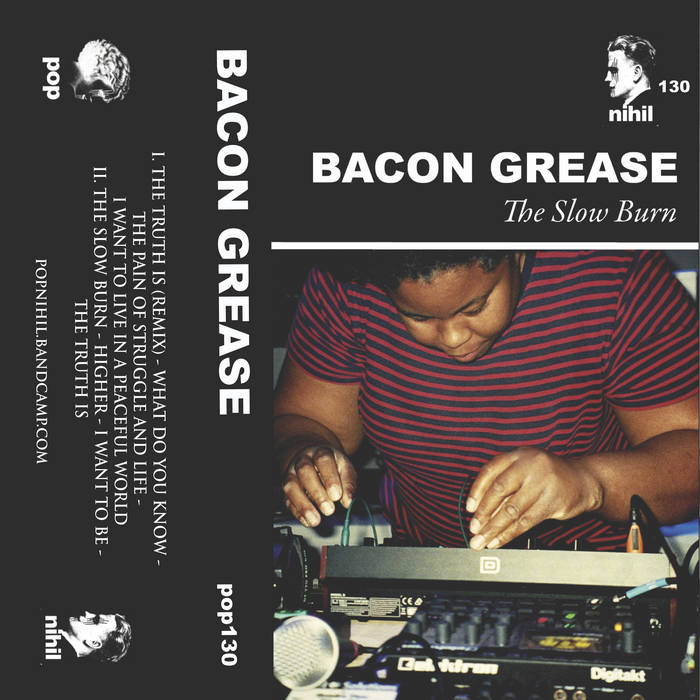 There are times when you find a musician, and everything clicks. I might have been watching a Top of the Pops performance as a kid and asking around at school the next day if anyone knows about them. Or going to a gig and the support band totally blowing away the main act and you immediately going to the merch table to pick up everything they have. These have both happened to me multiple times. Or perhaps a label you like has a new release by an artist you aren’t familiar with. You listen to them, and you then spend the rest of the day online trying to find all their releases, compiling a HUGE playlist and then spend the next few months with it being your background to life. This definitely happened. The label was Popnihill and the act was Bacon Grease. Andrea Knight’s self-titled debut album was an eye opener. It rekindled my love for techno at a time when it was all sounding anodyne. Knight’s new album, The Slow Burn, not only lives up to its name but it also the most visceral and compelling release Knight has put out. This is no mean feat – The Slow Burn is her 30th solo release in six years!

After two opening, mood-setting tracks, Knight unleashes one of the finest pieces of music she has ever committed to tape. ‘The Pain of Struggle and Life’ sounds like a 16-minute lo-fi Madonna. The beats are crisp but it’s the lilting synth that really makes the track. Lyrically it’s about escapism, as most great (pop) songs are. In Wham’s classic ‘Club Tropicana’ George Michael sings about wanting to go where fun is, where the drinks are free, admission is a smile, and everyone is your friend. Here Knight isn’t looking for that, she just wants an escape from the drudgery of life and, as the title says, the pain and struggles connected to that. At one point Knight sings, half crooned half spoken-word diatribe, “The Days are long. Nights are short, but I want to be on top of the world”. It speaks of someone who lives to be out with friends just having it. Later she questions “Have you ever felt the pain of life? Of the struggles of the everything?”. Near the end of ‘The Pain of Struggle and Life’ she confesses “I want you. Do you want me?”. There is something Fall-like to these lyrics. They are poignant yet feel totally off the cuff. Coupled with her pulsating techno the results are one of the greatest existential crises ever set to music.

There is a wonderful absurdity to The Slow Burn. As the music whips around you in tighter and tighter frenzies, everything starts to feel chaotic. The basslines are manic, bells start ringing because they can and there is an ominous feeling of purposeless to it. Which feels reminiscent of the original techno tracks. They were these massive sounding soundscapes made because the musicians had new equipment to play with and were excited about unlimited possibilities and the noises and tones. The Slow Burn is the finest techno album 2020 has produced. Knight’s take on techno is inspired. Instead of something over produced and innocuous, Bacon Grease creates something more in line with the Detroit Godfathers. Also, in a weird way the whole album reminds me of Joy Division. Knight crafted these songs in a claustrophobic and brooding way, but there are flourishes of hope. In an even weirder way this sounds a lot like how 2020 has played out.