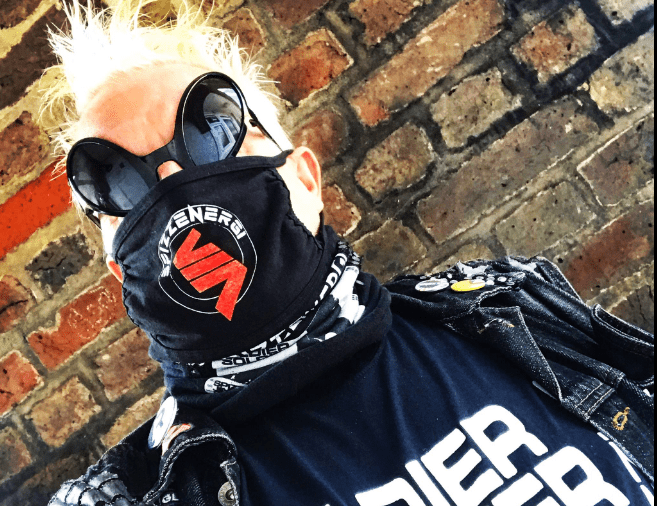 Spizzenergi’s ‘Christmas In Denmark Street‘ has already been climbing up the Top 20 of the vinyl charts this week, in part thanks to an online campaign to get it to the seasonal top spot and in part due to a limited run of red vinyl seven inches that had ‘collector’s item’ written all over them. But there’s no denying the song’s protest sentiments are hitting a nerve in a year when both venues and musicians have been under fire, and hopes are high for its prospects when the full digital and streaming affair kicks off on December 18.

“It’s not a Christmas song, it’s not a protest song,” says the veteran punk band’s frontman and founder Spizz, “it’s an angry song!”

Well, that’s his opinion. We reckon the Tony Visconti-mixed anthem about Denmark Street’s 12 Bar Club – “don’t look for it, it’s not there anymore” as they say in Spinal Tap – is all three.

So we asked Spizz to list a few of his Christmas favourites, from Poly Styrene, Run DMC and the Flaming Lips to Slade and Wizzard.

This was a perfect anti-war tune and gave us a feeling that something so right would win through.

Flaming Lips – ‘Christmas at the Zoo’

Amazingly this band has been going for nearly as long as SPIZZENERGI and still sound current , like SPIZZENERGI. This is a noise pop gem. Free the animals!

Wizzard – ‘I Wish It Could Be Christmas Every Day’

Has to be my real favourite cos Roy Wood was not only from my neck of the woods but because it’s the best, most brilliant title ever!

Scandinavian low fi gorgeousness . From Bermondsey to Stockholm, it makes one glow and defeats the winter chilblains after a long trudge home through the snow and ice.

I was told to choose something currant . Apart from my own new song it doesn’t get more current than this. Nice squelches here.

Andy Williams – ‘It’s The Most Wonderful Time Of The Year’

This song can literally make you forget everything that’s bad.

Unfortunately it has to come behind Wizzard (in a Black Country face off) even though I went to drummer Don Powell’s wedding reception..

Futureheads – ‘Christmas Was Better In The 80s’

It’s true ! Christmas was better in the 80s!

Christmas rapping was better in the 1980s too.

The Greedies – ‘A Merry Jingle’

The idea that punk steps were anti-music showed here and with a sense of humour that there should be no musical barriers between the tribes.

I admire the craft and the melody, so it works for me.

Met the fellow – he came to a couple of my gigs and paid to get in! At the bar told me how much he loved one of my songs ‘Central Park’.

The Pogues – ‘Fairytale Of New York’

Kirsty liked me and I was in one of her videos. To lose her the way we did was beyond pain.

Feels like we need a bit of fucking miracle right now, so we are down with this one this Christmas.

The Fall – ‘Hark the Herald’

Truly awful record but a list wouldn’t be complete without the madness of the Fall. At Christmas, pub Landlords use this to clear their premises at closing time.

Love how my hero effortlessly put a US legend into second place!