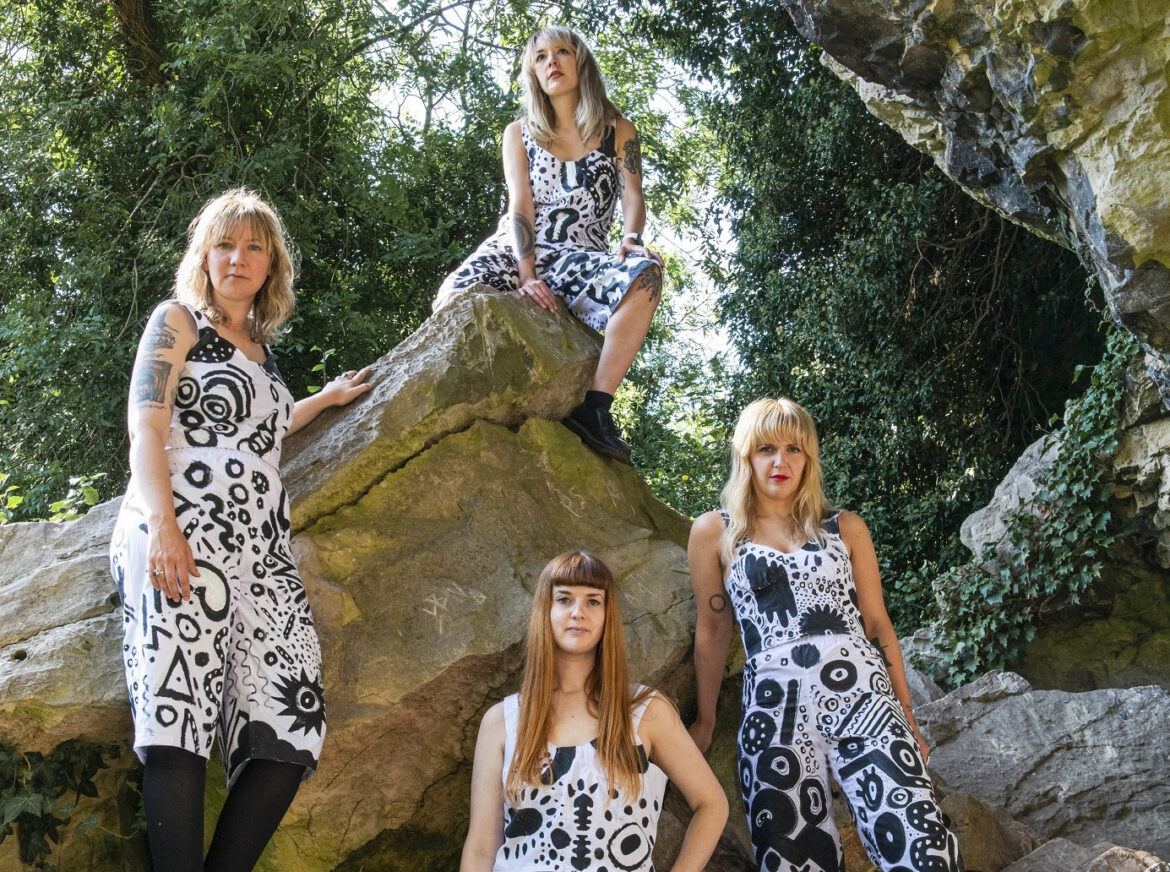 Here we are with part two of our Welsh music predictions for bands heading for glory and superstardom in 2021.

Sister Wives (pictured) quietly released debut EP Gweler Ein Gofid (‘See My Grief’) in November, the three-track debut melting into the self-conscious with its unsettling and sinister undertones. More is to come for this Sheffield-based bilingual foursome, the witchy AA single ‘Crags’/’I Fyny Af’ / ‘Rise’ via Delicious Clam Records just for starters At GIITTV we are having disturbed yet much welcome daydreams about Sister Wives on a double headliner tour with Libertino Records MÊL, whose output also took a darker, more troublesome turn as 2020 progressed. Both bands travelling the venues of the UK and disturbing the great British public appeals greatly. – Cath Holland

Having more than one vocalist always adds to the depth and of a band, and so it appears to be the case with Pys Melyn. The simplicity of new single ‘Prin‘ featuring Omaloma/ Sior Amor,  and the humour of ‘Hosepipe Ban’ complete with Manc/Scouse ribbing, makes me suspect this spiky and varied ensemble are preparing to hit their stride. – Cath Holland

2020 kicked off personally with Papur Wal’s show Liverpool show as part of Independent Venue Week, following their set supporting Adwaith in sunny Manchester just up the road on the other side of Xmas. We’ll pretend 2020 didn’t happen in the Papur Wal world of garage-slacker-rock interspersed with humour and sunshine and cheer, single ‘Meddwl am Hi’ aside, and look forward with relish at the trio’s debut album this year. – Cath Holland

Self-styled “femme fatale” from Cardiff, Phoenix Rise, is crafting impish songs that skirt the lines between new wave, post-punk, spoken word and hip hop. Delivering killer sermons on the state of Brexit Britain over the past year. Her insurgent brand of spoken word has been delivered with a smirk on her face and a glint in her eye as she takes aim at an incompetent Tory government and shambolic pandemic response and the heartbreaking sight of cavernous inequality. Her new one ‘Immunity‘ extols the virtues of vaccinations to combat, taking down covidiots and anti-vaxxers with a swish and sway and an amusing and earworm riff on “drop it like it’s hot”. Phoenix Rise is a formidable force of nature, who will be her next target? Bill Cummings

Boy Azooga‘s Dylan Morgan steps out into the psychedelic light, taking with him prog and trusty college rock for company. Citing Dungen and Pond, to Supertramp, Steely Dan, Squeeze as a guide, single ‘Time Will Tell‘ from December was fuzzy fun yet reflective with it. A second single follows in February.

Ailsa Tully, who hails from Wales but now resides in London, has proved herself to be an emerging songwriter with a distinctive voice and songwriting possessed of a depth of promise. Her lyrics are both honest and poetic, often exploring feminism and her experiences of being female in her writing. Ailsa has an all-female band which brings her songwriting to life, from modal harmonies and driving rhythms to tender emotive melody lines. Aisla Tully is showing a depth and maturity of songwriting that mark her out as one to reckon with in 2021. (Bill Cummings)