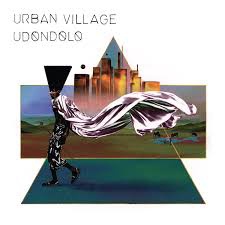 South Africa has undeniably had a tormented history. One area, in particular, that’s had a troubled segregated past is Soweto, a township that’s part of Johannesburg. Vocalist and flautist Tubatsi Mpho Moloi, guitarist Lerato Lichabam, drummer Xolani Mtshali and bassist Simangaliso Dlamini (who perform under the free-spirited Soweto-based project Urban Village) all grew up at the time when the racist regime of Apartheid was ending. Their debut album Udondolo is a tribute to the overcame hardships of Soweto and towns alike. The inclusion of the Zulu language, the stories told by the quartet and the constantly-exciting mix of South African genres (kwela, marabi, maskandi) within, make Urban Village’s first album an educational experience for foreign listeners that will make you want to research more into their culture’s history.

The funky ‘Ubusuku’ recalls a child called Hector Pieterson who was killed by the police during a school children-led protest in 1976 (also known as Soweto protest) against the idea that schools were going to teach equally in Afrikaan and English. A traumatic event that most people outside Africa wouldn’t know about. ‘Ubaba’ (meaning father) recalls a more regular but equally disruptive event as it addresses a time in Soweto when fathers were separated from their families and put to work as miners. Yet the song doesn’t just recount, it embraces the importance of fatherhood. The way the song incorporates an acoustic atmosphere and multiple harmonies (much like many moments on the record) imagine the detached fathers singing their common experience together around a campfire. Furthermore, the playful ‘Empty K-Set’ is also evocative, if less serious, as it takes us into the heart of their everyday community with bus announcements and marketplace calls.

The album is title Udondolo, meaning walking stick in Zulu, to show how Urban Village respect their elders and another form of respect, other than acknowledging history, is referencing older South African music. ‘Izivunguvungu’ nods to a harmonic acapella singing style called Isicathamiya, which dates back to a time when men left poorer areas to look for work for bigger cities. While the swinging ‘Marabi’ – which with its trumpets and tropical guitar make it equally sound at home on Jools Holland’s annual Hootenanny and as background music to BBC1’s Death In Paradise – borrows an aspect of South African musician Solomon Ntsele’s The Lion Sleeps Tonight with its “wimoweh, wimoweh, wimoweh”. The narrative of the song is about shebeens – small sometimes illegal drinking places situated in the black areas of their country.

Urban Village’s debut album Udondolo is a delightful musical journey, containing party atmosphere tracks that are impossible not to dance to but simultaneously have meaningful calls to action, such as the black pride track ‘Dindi’. As well as a perfect balance of vibrant moments (trumpets, saxophones, intense percussion) with more mellow moments of masterful flute (hear Tubatsi’s gorgeous solos on ‘Madume’ and ‘Inkani’) and acoustic guitars (including the duet with Msaki ‘Umhlaba Wonke’), make this a boldly-produced album that never gets boring.