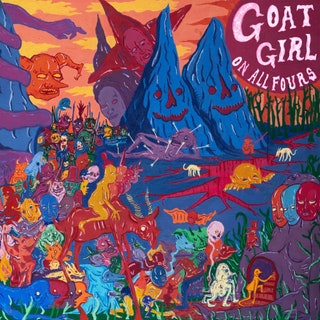 In 2018 Goat Girl delivered a rare beast – a much hyped indie album that actually lived up to its hype.  Given the variety of modes they found themselves playfully inhabiting (punk blues, post-punk, jangle pop) they turned round a cohesive, well developed debut.  In the run up to the release of follow up On All Fours they found themselves on creepy, fun and fidgety form with lead single ‘Sad Cowboy’.  The surprise dance outro indicated that they hadn’t given up on considering every possibility for each track.

Pensive verses and more open choruses on opening track ‘Pest’ slowly ease you into the record.  The central character they are referring to is perhaps a little too similar to the one on ‘Creep’ from their first album.  Though this is understandable if overbearing, annoying men have had a big impact on the group.  Unexpected beat switches, where the drums pull out at irregular intervals on ‘Badibaba’ shows how clever percussion can transform a conventional rock song into something strange and magnificent.  Even when overlooking the novelty, there is skilful songwriting on display here.  A turbulent breakdown two thirds of the way through the song adds some further drama and unpredictability into the mix – this is a band creatively firing on all cylinders.

‘Jazz (In the Supermarkets)’ is a totally different kind of song.  It’s curious, lyricless, yearning vocal melodies are used as ambient textures to support the scrappy tones from the guitars.  This is a band that is not afraid to take risks and pull their sound into obscure territory.  ‘P.T.S.Tea’ moves into an entirely different sonic universe.  Gone is the typical dark tension, replaced with a quirkier, jerkier tone.  “PTSD from a whole cup of tea.”  This lighter track brings some much needed shape and dynamics into the LP.  This is followed by ‘Sad Cowboy’ which sounds no less confident and strange in the context of the wider album.  Having a prominent synth throughout the track is the band taking up another opportunity to redefine what they can do with their sound.  Similarly ‘The Crack’, a wonderfully spacious, roaming number, changes things up again with an instrumental pulled straight from an old cowboy movie.  Strangely, but effectively this is paired with 1960s style psychedelic vocals.

The quality of these songs highlights that when Goat Girl veers into more patient passages, paired with a straightforward structure and songwriting, they have less going for them.  They are at their best when they’re actively contorting themselves into strange shapes.  The song ‘Once Again’ is a great example of this, it melts into the overall effort despite being prominently placed in the track listing.  It is difficult to know what they were really going for on ‘Closing In’ which has some nice textures and tones but has little focus and no killer points of interest.  For every song like this though there is one like ‘Anxiety Feels’, an impactful exploration of the effects of depression medication, featuring overlayed, hypnotic vocals from various group members.

Most of the weaker tracks are reserved for the last third of the LP.  ‘Bang’ is a nicely produced, well performed but boring rock song that feels like Goat Girl by the numbers.  ‘Where Do We Go From Here?’ has some nice ideas floating in it, especially in the sections with thinner instrumentation, but it falls flat in the grander, warmer, fuzzier sections.  Closing track ‘A-men’ is another totally fine composition but features the feeblest, flattest vocals on the whole release.  It is a shame that on a record that houses such talent they go out on such a low.

Given how good over half of On All Fours is, it is nuts that so much of the backend of the album was even published.  Despite this, it has a higher proportion of highs than lows.  There is an outstanding 30 minute sophomore album shining through this 55 minutes.  We have certainly been treated to an album’s worth of quality new material from Goat Girl this year, it’s just sad that we’ve had to wade through so much else to get to it.

On All Fours is out now on Rough Trade.