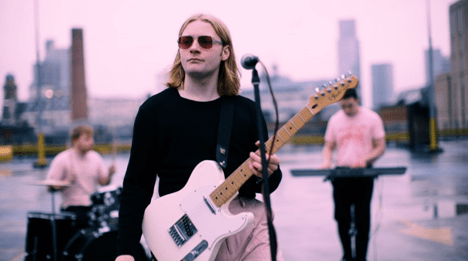 Rory Wynne moved from Stockport to the relative glamour of Manchester towards the end of last year, and it seems urban living has paid off.  Going by his new single alone, the power-pop ‘n’ roller has expanded his horizons and put the frustrating months of 2020 to very good use indeed.

New single ‘Make You Mine‘, shows a confident Rory exploring further outside the generic influences adopted by your typical young Northern male. There’s no gritty dank realism here, instead he delivers an intro that spirals like a 1980s video game, full on disco drama, bringing in more synths, and a spoken segment sweet in its sincerity. He reveals a penchant for classic American pop, citing Quincy Jones and Michael Jackson elements but also lets his imagination run free, serving up a first date narrative which cleverly reflects a vibe so much bigger and wider.

Hope and optimism isn’t something there’s much of floating about right now, no matter how much we try our very best. ‘Make You Mine’ reminds us of promise, the open eyed pleasure of new romance and freshness, new beginnings.

The video sees Rory and his band heroically performing on a rooftop with a grey skied backdrop, all four bathed in a pink glow. He walks the city centre streets of Manchester on a date with a pretty girl, taking familiar sights and places, Piccadilly and the Northern Quarter and street art of Ian Curtis, reminding us while we’re all stuck at home that yes, we can have all this again. And it will be GREAT.