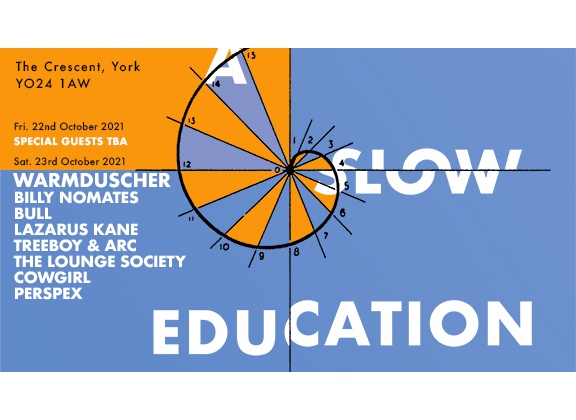 Following the Prime Minister’s announcement on Monday of the government’s detailed, four-stage plans for the unlocking of England amid the current coronavirus vaccination programme, and in what is a very strong indication that we are about to welcome the return of live music in the not too distant future, local promoters Please Please You and Brudenell Presents have revealed news that a brand new event for York called A Slow Education will take place in The Crescent Community Venue in the city at the end of October this year.

The inaugural edition of this two day event was originally scheduled for May but in light of the third lockdown having been introduced in England in January this was cancelled. It is now back on, though! And will take place at The Crescent on Friday 22 and Saturday 23 October, 2021.

A Slow Education offers us an opportunity to see a number of exciting new artists performing alongside some great local acts. Saturday’s line-up will feature the London-based post-punk band Warmduscher who promise to take us all on “a Subway sandwich ride to heaven”; the self-described Lone Ranger and undeniable musical tour-de-force that is Billy Nomates; plus, amongst others, local heroes –  recent EMI Records’-signing Bull; glorious garage rockers Cowgirl; and the plastic band for the decadent listener, Perspex.

Of the original line-up, the only act no longer able to make the rescheduled dates is the Norwegian band Pom Poko. As such, the acts to appear on the Friday night have still to be announced. The organisers, however, are currently busy putting together an equally exciting line-up with full details to be announced soon.

There are still many rivers to cross between now and then – including a number of governmental reviews that will take place within the unlocking process, including the exploration of “Covid status certificates” and an “events research programme”, with pilots to test the effects of larger crowds and/or reduced social distancing – so caution must still be exercised. But suddenly there does seem to be genuine reasons to be cheerful and the prospect of A Slow Education party is but one of them.