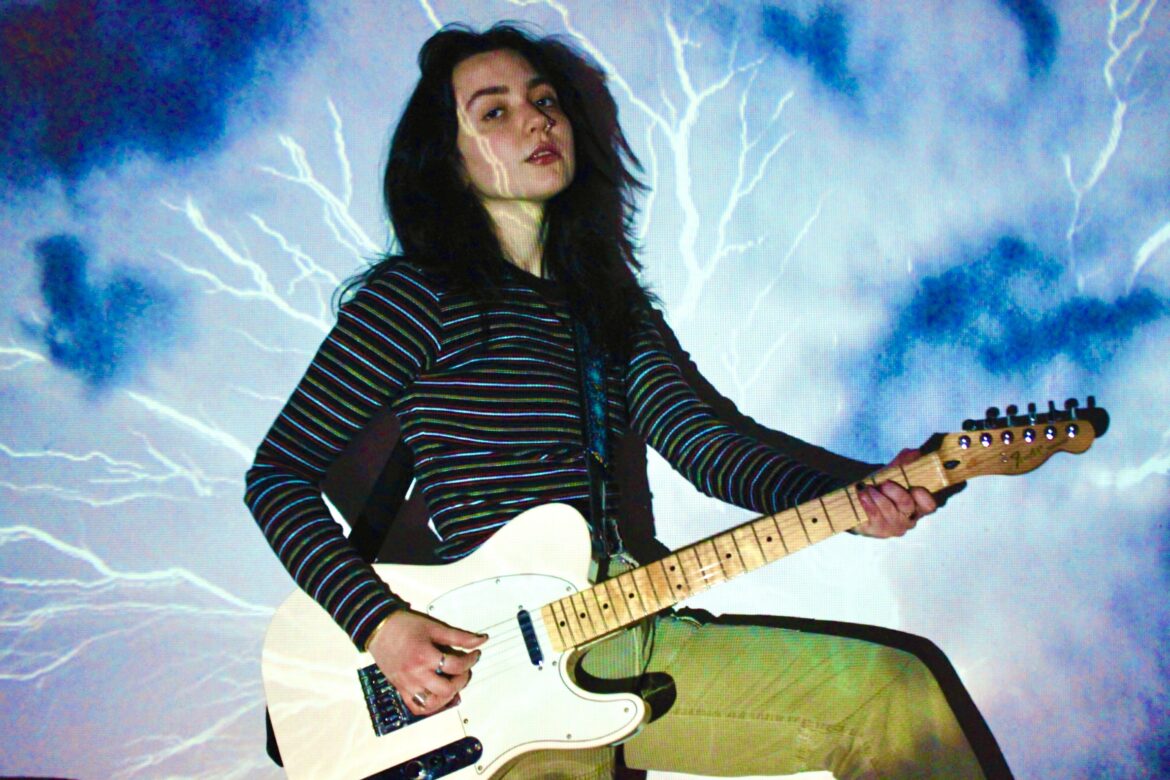 New York based Singer songwriter Laura Elliott released a succession of four captivating debut singles during 2020: ‘For Now’, ‘You Ran Out The Car’, ‘Grass Stains’ and ‘Caroline’.  It was the song ‘Grass Stains’ that really hooked me from the first listen, and it became a song I played often. The lyrics really stood out to me: “I see bluebirds fly so high, so high/And yet I’ve still got two feet stuck in the ground/Is life holding me down or am I just around through the worst of it?”. Elliott’s music brings together a soothing melancholy with lyrics that are introspective, conjuring a really powerful sense of intimacy. Likewise, the songs capture warm and vivid snapshots of feeling that are beautifully enveloping and demonstrate that Elliott is a songwriter to watch.

With another EP planned for release later this year, I interviewed Laura Elliott about her musical development and influences, the role of songwriting and music in her life, our shared admiration for Phoebe Bridgers, and how she has been coping during the pandemic.

When did you start playing the guitar and how did you develop your skills? And when did you realise you would like to be a musician?

I started playing guitar when I was 15. I wouldn’t really say I got any good until I was 18 though. I never took any lessons, mostly learned from friends, listening to my favourite songs then trying to learn them, and by writing guitar parts that are too hard for me to play and then practicing that over and over until I get it right. I think I always knew I wanted to be a musician. My dad played the bass guitar growing up and I would always go to hear him play with his bands. For as long as I can remember I always wanted to be a part of the performances. I think the real moment though was my senior year of highschool.

Your song ‘Grass Stains’ really made an impact on me. This is such great songwriting and with a beautiful melody that is spellbinding. Could you tell us a bit about this song and what inspired you to write it?

‘Grass Stains’ to this day is probably one of the songs I’m the most proud of. I wrote this over the summer. I had gone through a pretty bad breakup that kind of split my friend group in half in fall of 2019 and it took me a really long time to process it all. I think I was finally able to reflect and write about it in August. I spent a really long time being angry with those people, but it took me all those months to realize that it wasn’t all that bad. We did have a lot of great memories and they pushed me to be a better musician, songwriter, and taught me a lot about life and growing up. This song is just a reflection of that time. It’s kind of about how I allowed myself to be brought down and feel crappy about the situation for way too long. I feel like I was holding myself back from being happy for quite a while. Although those people aren’t in my life anymore, I’m really grateful for the good times we had.

Generally, how do you gain inspiration for the songs that you write? Do you often write about personal experiences and feelings, or is there something else you try to tap into?

I think personally, my best songs come from my real experiences and feelings. I find it kind of difficult to connect as well with my songs that aren’t based on experience. Because of that though, I find inspiration in some of the weirdest times. Sometimes I’ll be hanging with people and feel this wave of emotion and I’ll just have to get straight to a guitar and start writing something.

Another song that made a strong impact on me was ‘You Ran Out the Car’. Could you please tell us about the inspiration behind this song in particular?

This song was actually about that same breakup. It was a really unhealthy relationship and neither of us really got any closure from it because we were just never able to be civil about it. I think writing this song was my closure though.

‘Caroline’ is also a really striking song with beautiful emotional honesty – how did this song develop?

Caroline is about me 100%. I have struggled a lot with mental health for a while and this song to me feels a bit like a diary entry. It’s about my anxieties with friendships, my struggles with an eating disorder, and my depression which at times has brought me to some really low points. Because of my struggles with mental health, I’ve always found it really hard to maintain friendships and often feel like I self-sabotage them. This song is kind of about my thinking process and my fucked up head.

I know that you really appreciate Phoebe Bridgers’ music – as do I! My favourite song of hers is ‘Scott Street’ – it moves me deeply. What impact has her music had on you and what is your favourite song?

Phoebe Bridgers changed my entire look on songwriting. She’s painfully honest and tells stories that are so personal yet feel like they apply completely to my life. Funny enough, ‘Scott Street’ was actually the first song of hers that I ever heard. Because of that, I always attribute it to being my favourite song because it kind of changed my life forever. She makes me a better writer and I feel like I’m always going to have a part of her in me and my songs because of that.

I’ve really been impressed by the cover versions you have been posting online. What makes you want to cover a particular song? And what is your favourite song to cover?

Good lyrics usually make me want to cover a song. If I try playing something and in the process find that it feels so personal and intimate to my own life and circumstances, that’s usually when I’ll feel good about sharing that cover. I love making other people’s songs feel like my own. I usually get a huge burst of inspiration for my own songwriting from those experiences. I feel like I’m constantly stealing my favourite songwriters’ songs, whether that be in influence in the guitar part, melodies, or even a lyric. They somehow always become a part of my own music. My favourite songs so face have been ‘Moon Song’ by Phoebe, ‘Take On Me’ by a-ha, and ‘Friday I’m in Love’ by The Cure.

Thinking about your musical influences, what songs or albums influenced you when you were growing up? I often find that music that we connect to as teenagers can affect us for many years and imprint our soul deeply – were there any songs that did this for you?

Around my house there was a lot of jazz playing — Ella Fitzgerald, Miles Davis, Sarah Vaughn, and classic songwriters like Carole King, James Taylor, and Joni Mitchell. I studied jazz in college but obviously now am writing in the more folk/rock/singer-songwriter realm. I think classics like ‘Fire and Rain’ by James Taylor, ‘You’ve Got a Friend’, by Carole King, and ‘Big Yellow Taxi’ by Joni Mitchell are songs that I remember the most. Those folks have and continue to influence me to this day.

And more recently, what music helped get you through the past year – were there any particular albums or songs that stood out for you and helped you through lockdown?

All of ‘The Baby’ by Samia has been on repeat. Obviously ‘Punisher’ by Phoebe. A song by my friend Dora Jar has been on repeat. It’s called ‘Multiply’ and I think I’ve listened to it every day since it’s been out. She’s an enormous influence of mine. And Pinegrove always feels good to listen to. Their album ‘Marigold’ is a staple of mine. Evan has some of my favourite songwriting ever. They have songs for every mood. Really incredible.

Thinking about the role that music plays in your life, what would be the three songs that mean the most to you, that you could not imagine life without?

This is a tough one. I think I’m going to start with ‘Old Friends’ by Pinegrove. Its just an absolutely perfect song. That song has been a huge inspiration for a lot of my writing. Secondly I’d probably say ‘Scott Street’ by Phoebe Bridgers. This is the first Phoebe song I ever heard and it changed my entire view on songwriting and music as a whole. Lastly I’ll say ‘Reading Me Wrong’ by a small New Zealand artist who deserves way more attention than he gets. His name is Jed Parsons and he’s just an incredible songwriter. This song has gotten me through a lot. The dynamics are crazy, the lyrics are amazing, and it just always feels relevant in my life.

So far my favourite concert would probably have to be The Alabama Shakes in 2016. I went to this festival in NYC called Panorama. I was just 16 years old and had literally never heard them before. They came on the big stage and from the first note I was drawn in. It just felt like such a special moment. I’d never experienced a live show like that, being so drawn to music that I’d never heard before. It was a really special moment, and they’re an amazing live show.

How are you coping with everything during the pandemic? In what ways has it affected your creativity?

It’s been quite difficult honestly. But, I’m pretty grateful for this time. I’ve learned to be way more patient with myself and I think it’s benefited me in all aspects. My songwriting has improved, I feel happier. I think this time has really allowed me to become better all around. It’s strange but I’m grateful for this isolation. I think I would’ve rushed to put out a lot of music that I’m not genuinely proud of if it weren’t for the pandemic. I feel like for the first time in my life I’m learning to take my time and appreciate patience. It’s worth it.

As an audience member I miss the feeling where the lights go down and the band or musician is about to come on stage. As a performer, what do you miss the most about playing live with an audience?

I’m definitely an adrenaline junkie. I think I miss the moment right before going on a ton. It’s like this moment of absolute fear and excitement all at the same time. But I also miss just receiving all this wonderful positive energy from the audience. It is the best feeling ever to watch people in the crowd fixed on you and what’s happening on stage. I think it’s so intimate and special and there’s really nothing like it.

Finally, can you tell us a bit about the tentative plans you have for the rest of 2021?

I’m writing and recording and trying my best to put out some of my best material yet! There will absolutely be an EP in early fall. 🙂 Can’t wait to share it with everyone.