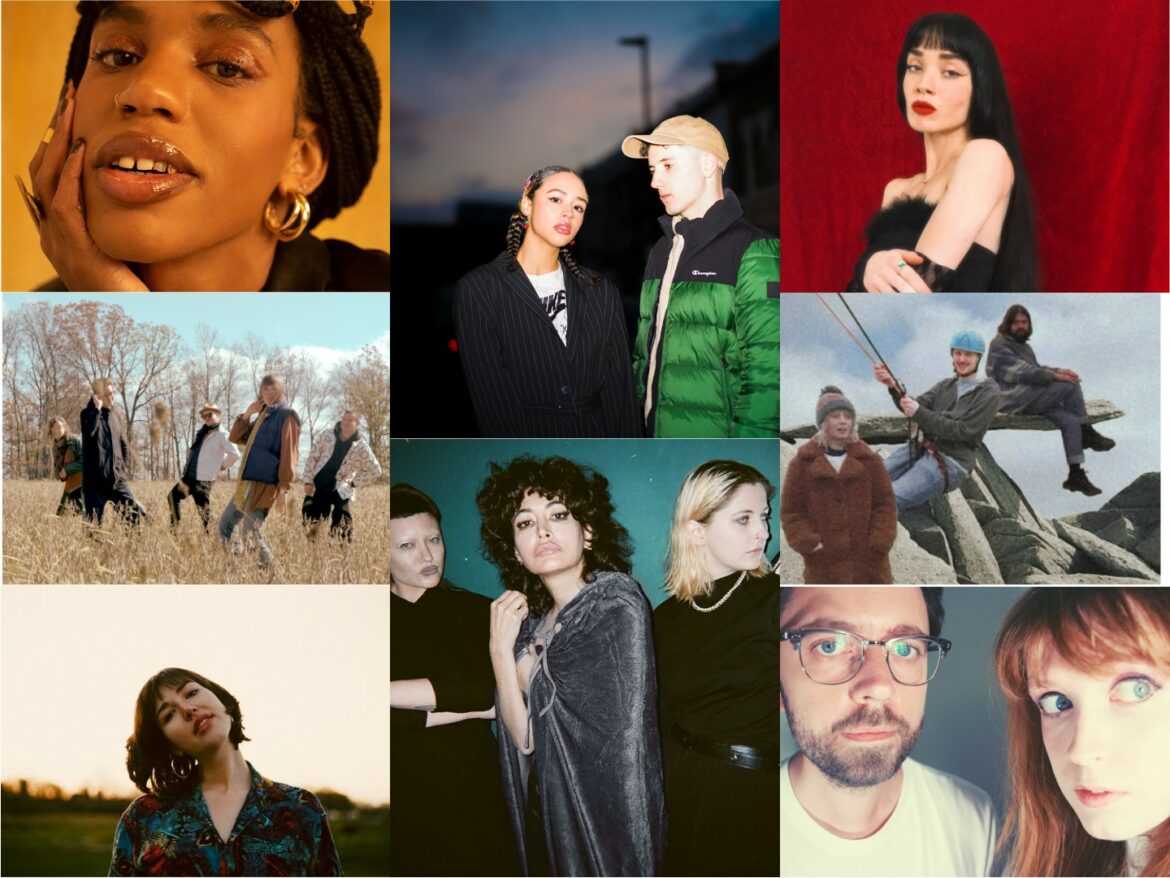 Happy International Women’s Day! To celebrate we are dedicating this weeks tracks of the week run down to female artists or acts featuring talented women.

Angular and wired deep tan deliver a high-speed homage to a heavy night, ‘camelot’. With duelling metallic guitar clangs, dexterous bass lines and a vocal that ups the tension, its a precise frenetic track that simmers with menace and nihilism.

The new single comes alongside news of the London trios debut EP ‘creeping speedwells’ which is being released via Practise Music on 4th June. They say “‘camelot’ is an unashamed tribute to ‘the sesh’. a group of people have just been evicted with only 48hrs notice, leading them to have one last rager in order to forget about the stress of not finding a new home with such short notice. ”

Ushered in on a bed of fluttering keyboard notes and bubbling beats, with ‘Wait Wait Dig‘ Post Coal Prom Queen deliver an insidious and delightful pop earworm that skirts the lines between Goldfrapp, Bjork and Kylie. Lily Higham’s feather light vocals are joined by intricate tapestry of synths and pulses that cascades over the lip of a cocktail cup and into a deliciously addictive chorus. Fantastic

Post Coal Queen is the evolution of L-space; Lily Higham and Gordon Johnstone have. PCPQ refuse to be pinned down to one sound and continue their ambitious sonic exploration at every turn.

Temptress released their new single ‘SOS’, a self-anointed ‘lockdown anthem’ for tough times, last week. It’s a sleek offering bathed in keys and soulful bars, the radiating catchy chorus offers light at the end of the lockdown tunnel has echoes of 90s r&b sway, yet has its feet firmly planted in 2021 nodding at Ariana Grande and NAO. “SOS is a lockdown anthem,” they explain. “It’s about missing friends and family, knowing you can’t be with them, but letting them know if you’re needed, you’re one call away.”

The Bug Club – We Don’t Need Room For Lovin’

Wry, dueling girl/boy vocals that sound like they are wrestling to be on top, skidding guitars and a We Don’t Need Room For Lovin‘ from The Bug Club, sounds like it could have a party in a cupboard. Clocking in at just two minutes it explodes into a joyous crescendo that leaves you wanting more, its an absolute bloody brilliant riot!

The Bug Club are a three piece from the little-known rock n’ roll hotbed that is Caldicot, Monmouthshire. Their debut EP is called ‘Launching Moondream One’, and out in April. The band are made up of Sam Willmett on guitar and vocals, Tilly Harris on bass and vocals and Dan Matthew on drums.

Yaya Bey – Fxck it then

“I ain’t average” sings Yaya Bey on the evocative soul pop of ‘Fxck it then‘, that slithers and intoxicates with a fantastic vocal, horns somewhere in the background and bars that are invested with a powerful assertion of womanhood. With echoes of Erykah Badu and Lizzo, this is a tantalising first offering.

The new EP from Yaya Bey out on 9th April on our newly re-launched Big Dada label. A producer, singer/songrwiter & respected collage artist based in Brooklyn. As with her previous release (Madison Tapes) this EP delves deeply personal and refreshingly honest truths of Black womanhood and love, focusing on a breakup that triggered the deepest of wounds: the childhood trauma that resurfaces in our relationships.

Freya Beer shares her first music of 2021: Siren’ is a sultry, bewitching taste of Freya’s artistic vision – inspired by the J.W. Waterhouse masterpiece The Siren. She describes it as a “gothic ritual” – this mysterious and intoxicating cut laced with jagged edged guitars, punishing drums and artful delivery, intersects the work of P J Harvey and Siouxsie Sou, offers swooping menace and a sting in the tale.

“Ever since I began writing I’ve always turned to art for a starting point on my songwriting journey. I’ve found I work best visually, hence why I like to research into a lot of art/films/photography to improve my skills. Sonically, the guitars in particular were inspired by Roxy Music’s album For Your Pleasure.” tells Freya. Taken from her debut album promised for later in the year, the track is released alongside a rescheduled run of UK tour dates for November.

Bernice‘s ‘Lone Swan’ is the final single from upcoming new album Eau de Bonjourno, an elegant and envloping this studied track sails majestically from sparse and glowing instrumental textures. Meditating upon the lives of swans, the vocals of Robin Dann are possessed of a haunting quality that have the kind of restraint and longing of Sade or Loma. Intoxicating.

Lone swan feels conflict, curiosity, and longing.” The band say of the track. “On a deserted road, city street, snowy mountain, suburban pool, forest, nightclub, airplane, crop circle, cloud – she absorbs as much as she releases. She doesn’t quite fit in anywhere she lands, wonders what is real, and her longing for connection carry her forward one webbed foot at a time.

Thallo – Welsh singer-songwriter Elin Edwards – follows 2019’s  single ‘I Dy Boced’ (Into Your Pocket), with this quite wonderful treat. ‘Mêl’ (Honey)  is a full four minutes of peaceful calm, smooth and laid back, she knits together cool jazz with pop and indie. Part of a series of songs to be released this year, we look forward to hearing more over the next months as the world opens up again.

Thallo  is playing a set over at the Ty Pawb Facebook page on Friday (March 12).