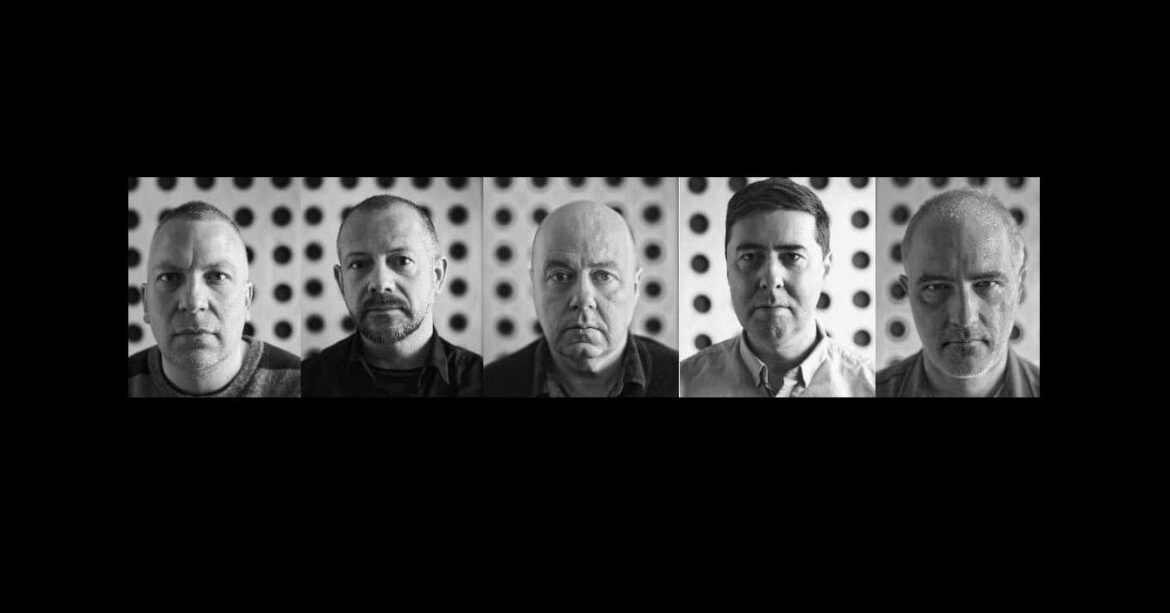 Nearly two decades after his untimely death, there are still certain facts that even people who never listened to the late, great DJ John Peel can still reel off at the click of a finger. Such as: ‘Teenage Kicks’ by the Undertones was his favourite single, and The Fall were his favourite band. Now we can add to this: the only band to record sessions for him and Aled Jones were Spare Snare.

I bring this up because Spare Snare have just released a three-CD boxset, entitled The Complete BBC Radio Sessions 1995-2018. Now I could be terribly glib, but it’s more than just what it says on the tin. Featuring work also recorded for shows across the BBC over the aforementioned years (other DJs include Marc Riley and Scotland’s Vic Galloway) not only does it point out how much more the BBC do to promote music that’s under the radar than commercial radio stations, but it also shows just how utterly underrated the band who came out of Dundee nearly three decades ago really are. To this end, I caught up with lead singer and guitarist Jan Burnett at home via Zoom.

It’s been nearly 30 years since the band formed in Dundee and those early singles are quite expensive now, with 1992’s debut ‘Super Slinky’ going for around £35 on Discogs. I joke about maybe the family going without food for a weekend to buy one [Editor’s note: he really wouldn’t dare!] ‘The first one I pressed was one hundred and ten copies,’ he recalls. ‘I could have pressed a lot more, but I didn’t want to end up with five hundred ashtrays!’ He pressed another hundred and advises: ‘The way of identifying them is on the back of the sleeve, one is a blueprint and one is a red print. But they’re both kind of hen’s teeth, I suppose. Only because people don’t want to sell them.’

Speaking about those early singles I have to ask about another early track, or should that be tracks plural? In 1995, the band released a song called ‘Wired For Sound.’ Now, that wasn’t the Cliff Richard song – but later on that year they did record and release a version of Cliff’s hit. Was it a deliberate policy, I ask to mess with people’s heads and then mess with them even further?

‘No, it was more just fun, really,’ he explains. ‘We did it as a live band in my loft room, back in Dundee. But the actual instrumental of our version is the Cliff Richard instrumental through headphones or fuzz pedals or whatever. So you’ll actually hear the original on our version!’

I ask him if he’s ever heard Sonic Youth‘s version of ‘Into the Groove’ by Madonna [for the record this can be found on the album they released as Ciccone Youth called The Whitey Album], where the cover fades out and Madonna’s version comes through, as the process reminds me of this. ‘That’s a good shout,’ he reflects. ‘I don’t know if that was a deliberate nod to that as well, might have been, not sure! It wasn’t an intentional nod to that.’

Often pressed in limited runs, while none of these singles gave the band a hit, they gained a cult status that they maintain to this day. In fact, their profile has risen, with having worked with Steve Albini a couple of years ago, and the fact that the new compilation is being positively reviewed by publications that have never featured the band before. With the exception of Jan, who lives in Glasgow, the rest of the band still live in Dundee. They all have day jobs (or whatever these might be called in the lockdown era), members working as a social worker, a nurse, and in IT.

Compared to how things were, when the band formed 30 years ago, the ways of recording when juggling day jobs or geographic locations are much less of an issue than they were once were. ‘I suppose technology has kind of grown with us,’ he muses, ’and we’ve learned how to do it as well, it’s not that we record remotely and join it up together – but it’s quite nice that we can converse really quickly and just see if you like things or not.’

We discuss the pros and cons of the different cities in Scotland. He points out how Edinburgh can be notoriously difficult to get gigs in (an experience borne out by other bands, I remember a Glasgow band called The Dirty Cuts telling me they were finding it easier to get a gig in Spain than Edinburgh), whereas Glasgow is much more orientated towards live music. As this writer has found, you can literally run into members of Belle and Sebastian, BMX Bandits or The Vaselines in the streets around the west end.

‘Even in Dundee there wasn’t a lot going on,’ Jan recalls, ‘and maybe a year or so after we started releasing records, there seemed to be a bit of Dundee scene coming up, but we never really felt a huge part of that. I mean,’ he adds,’ they’re all really nice people, but we just kind of got on with it and kept our heads down. In a way we don’t want to be too much a part of it, you don’t want to let that influence you so that you’re not sounding like XY and Z.’ He recalls a place called McGonagle’s where members of Snow Patrol and Idlewild would come and see them before those bands had made a name for themselves. They then started playing Glasgow where their connection was Stephen Pastel of The Pastels (and who is also behind the achingly hip Monorail record shop in the city) and who invited Spare Snare to support them there.

It wasn’t just Scottish indie royalty who gave their support. In 2018, the band found themselves working with Steve Albini, the legendary ‘recorder’ (he doesn’t like the word producer) whose very long list of credits includes not just Nirvana, but the likes of Low, PJ Harvey and Godspeed you Black Emperor! I ask how this came about. It transpired that he’d been sent a written questionnaire to answer.

‘One of the questions was: ‘What have you never been asked and what’s the answer?’ I’d never been asked who I’d like to produce us. And the answer was: Steve Albini, Dennis Bovell, and Brian Eno.’ So sitting on a train from Glasgow going to rehearsals he sent Albini an email. ‘By the time I got to rehearsals, I’d already had a reply from his PA, and then from Albini, saying ‘Especially from the ‘90s, I know I’d love to work with you. So I walked into the rehearsal in Dundee going to the guys: ‘Look what I’ve done!’

Creative Scotland awarded them the money to make the album Sounds and Albini came over. Although he is credited in records as recording them, rather than producing them, Jan is keen to point out Albini ‘is a producer, in terms of pure technicality, in terms of where to place mikes and that kind of stuff. He’s not just an engineer. When you’re actually watching him on the desk, that is where the production came in. The whole point of it, for me anyway, was that I wanted an Albini version of Spare Snare. In terms of time, we literally had five days, so we let him do his thing – and that was it!’

I ask about future Spare Snare releases. Will we be hearing something shortly?

There are in fact plans to record them with the legendary Dennis Bovell, whose credits include writing lovers rock classic ‘Silly Games,’ as sung by Janet Kay, and producing albums for artists as diverse as the Slits, Sharon Shannon, and Fela Kuti. ‘He’s one of my heroes as well,’ Jan explains. ‘I’ve spoken to him, he’d love to record us. He actually didn’t know anything about us, which is cool, because we’re this little band from Dundee,’ he says, modestly. ‘He actually went to Edwyn Collins, and Edwyn Collins gave us the thumbs up, which is like Yay! You can’t really ask for anything more than that. But, funding wise, we still need to pay for it, so that’s the next goal: how we do it. So we’ll work on that because we’d love to do something with him. Even if it was not a full album something like The Clash’s Black Market Clash. It might never happen, but I’m hoping that it happens!’

What about Brian Eno? ‘I’ve got no real connection to Brian Eno. I know people who have worked with him and I know people who know him – but hard work to get hold of!’ He concedes that making a Spare Snare record with Brian Eno probably wouldn’t be a five-day job.

For now, of course, lockdown is slowing things down. Jan says he hasn’t actually seen any of the band in person for a year last October. ‘We’ve obviously communicated and stuff like that, not being in the presence of others is a bit strange.’ He doesn’t see the boxset as a lockdown project, because he had known he was going to be doing it for over a year. ‘When I found out I could actually afford to do it, it has actually taken a good nine months to put it together.’

I ask about how the Aled Jones session came about. ‘There was a year when Aled was doing a Sunday session on Radio 2, and it was the anniversary -I’m not sure which anniversary of ‘Amazing Grace.’ So they were playing a version of ‘Amazing Grace’ every week. Graeme in the band [Graeme Ogston] knew the producer at the time and said ‘We’ll do a version!’ We did it in Barry’s house and sent it down. I think the feedback from Aled Jones’ listeners wasn’t very great, but that’s okay,’ he laughs.

With John Peel, he was on the list of DJs to send the first single to, and Jan recalls that he sent him a letter saying he really liked the record. Once there was a band assembled Peel phoned up and asked the band for a session, and Jan marvels that it was Peel who would contact the band himself, rather than asking a PA to do it for him. Other radio sessions tend to be live, and pretty much on-air, whereas the Peel sessions would be recorded over the space of a few hours, and for so many acts it was a huge badge of honour.

As we bid farewell, I thank him and offer him a coffee the next time we are in the same town. Oh, and as a final aside, I mention ripping the boxset to my home computer. His advice: ‘Disc one, there’s a lot of hidden stuff, so play it on a normal CD player.’