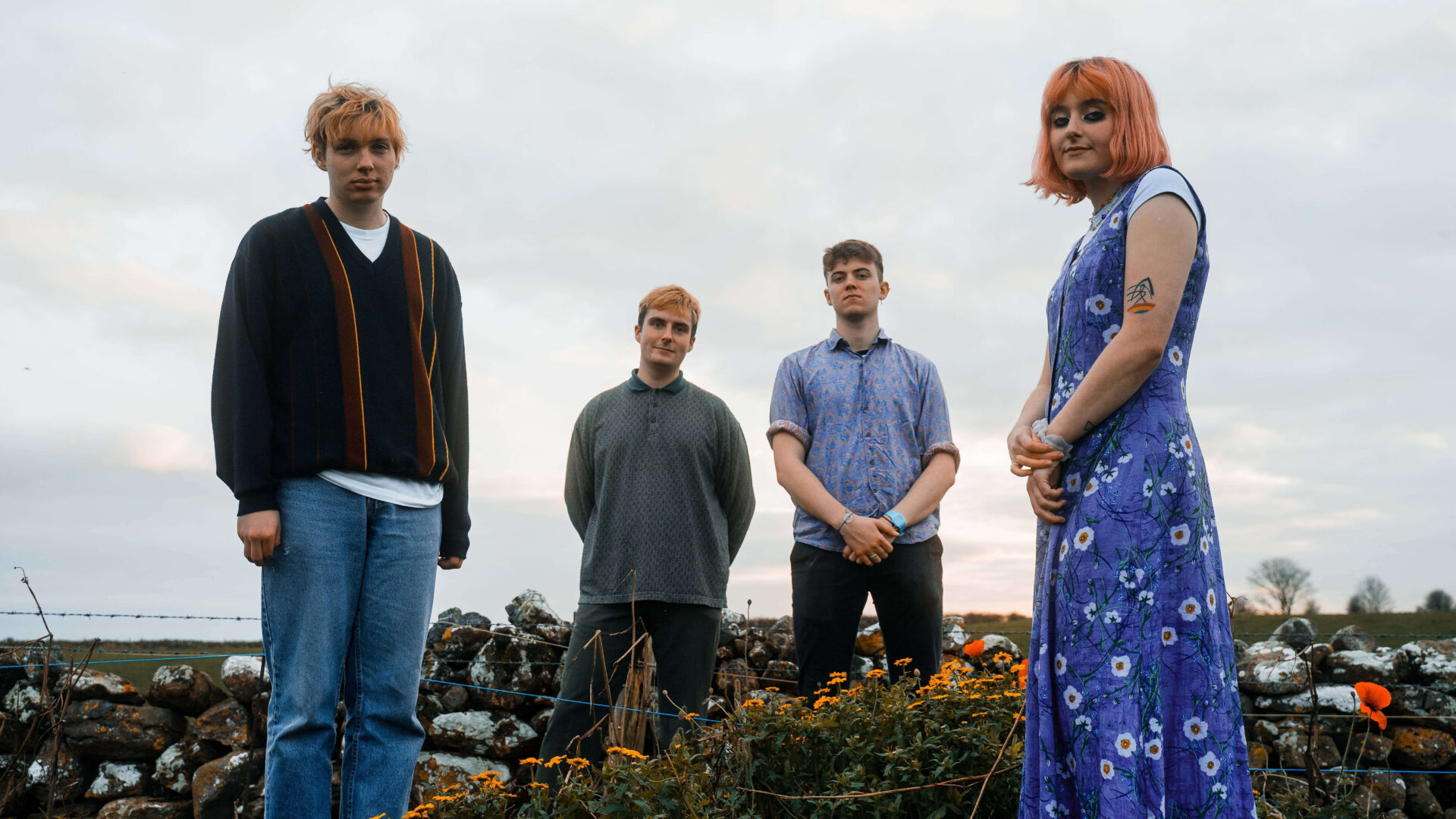 NewDad are set a to release their debut EP ‘Waves’ next week, the culmination of a eighteen months’ work building gradually building for the Galway quartet. Recorded with producer Chris Ryan, it collects previous releases, the enveloping melancholia of ‘Blue’ and the seesawing infectious refrains of ‘I Don’t Recognise You’, along with four new tracks including ‘Slowly’.

Each song juxtaposes fuzzy guitar waves, dexterous basslines, subtle percussive beds, woven with Julie’s half spoken half sung vocals that are intimate, evocative and heart puncturing, these wistful earworm choruses, tapping into growing pains, memories, longing and heartbreak and making them universal anthems. There’s is an exciting sound that rustles with echoes of the likes of early Lush, Slowdive and Wolf Alice, but has its feet firmly planted in the now. Their beguiling gaze pop sound is carving a place in our heart. NewDad are Julie Dawson, Áindle O’Beirn, Sean O’Dowd, and Fiachra Parslow, we caught up with them to find out more:

Hello! We are doing great thank you for asking!! We hope you are doing well too!

Lockdown is actually going fairly well for us. It’s obviously not an ideal situation but we are very lucky that we are all in the same bubble so we have the freedom to be creative and keep working in a safe environment.

Where does the name NewDad come from?

We actually got the name from randombandnamegenerator.com because we couldn’t think of a name!

How did you meet? What bands/artists did you find a shared love of?

We all went to school together! Julie, Áindle and I were all in the same year and started playing together about 3 or 4 years ago because we needed something to do in our music practical but we didn’t take it seriously. Sean joined about a year and a half ago and that’s when things really started to progress for us! We all have really different music tastes but collectively we all love bands like The Cure, Pixies and Charli XCX.

What was the first thing you released? What was it like?

The first song we released is called How and we released it just a year ago. We had been writing songs for a while but we didn’t want to release anything until we had found a sound we were really happy with and could be proud of down the line. The support we got for How was amazing and we still can’t really believe it!

There’s a really great music scene in Ireland we really do have some incredibly talented musicians over here. Galway is always full of buskers playing in town and loads of great venues for gigs so we are surrounded by music.

Music for teens And dads

Not really like we have played together for so long that it just came naturally. I was always a bit shy and quiet when I sang so having the vocals a bit lower in the mix just suited our style and we preferred that they were more laid back.

I find Julie’s singing style is so personal and intimate it sounds like a friend telling you their secrets, was this a style you had to work on to find?

I guess that’s just always how I wrote songs, it didn’t take much work to figure out but I always liked writing personal but still somewhat vague lyrics so that other people could relate to them or interpret them in their own way because it’s all written about stuff most people experience I think.

What’s on your playlist?

We actually have made personal playlists that can be found on our Spotify page but they have a lot of Charli XCX, The Cure, Pixies, The Drums, Peach Pit, Alex G, and The Strokes.

Probably Charli XCX we just love what she does so much she is a genius. She is also so good for collaborating with other artists and we think we could make great music together.

Can you tell us about your new EP Waves? Each song seems to distill a feeling or a memory is it your intention to write about personal things that you hope will strike a chord with others?

What’s your new single ‘Slowly’ about?

It’s a song about a person admitting their feelings for you with no follow through, and the feelings of uncertainty that surround that. It’s one of our more energetic songs, and the whole song moves quite frantically around the drums to convey the feeling of confusion when you go through this. For a song called slowly we sure do play it fast and it hurts Áindle’s hands to play.

There’s another band in Galway who are great friends of ours called Turnstiles and they are brilliant! More of a heavier punk vibe but great to play with!!

Are you missing live shows?

We are missing them so much!! We can’t wait to get back playing shows and touring as much as possible. We have had loads of time to practice!

Thanks for your time, we are loving your music!!