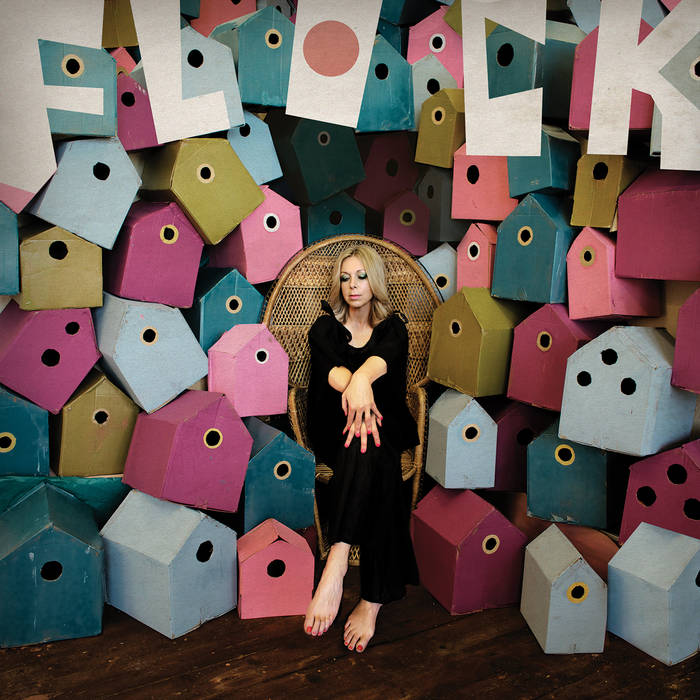 Jane Weaver‘s 2017 record Modern Kosmology was one of the best of that year.  She took an edge of your seat, incredibly weird, psychedelic approach to music and made it accessible, giving it a striking, continually evolving, pop edge.  Four years later, after a so-so remix album, she has returned with her eleventh LP, Flock.

The warm and well rounded ‘Heartlow’ kicks things off with confident, rich singing, gentle, alarm clock guitars and soft synths.  You’ll want to turn this song up as despite its gorgeous layers, without much prominent bass, it is faint.  It evolves into a twisting and turning outro before suddenly cutting off and becoming the swaggering, angular ‘The Revolution Of Super Visions’.  The 70s style, synthesised bass and high reaching, glamorous disco chorus vocals come together beautifully.  Weaver’s voice is heavenly.  She swaps out one 70s genre for another on the glam rock ‘Stages Of Phases’.  This song has a good beat and there is an enjoyable emotive bloom to the vocals, but Weaver does not sound at home in this environment until she is met with swathes of synths.  ‘Pyramid Schemes’ revisits this vibe later in the album.  Similarly, without a strong synth backing it sounds stilted and bare.

The glitchy, bubbling ‘Modern Reputation’ brings things back to the modern day.  The harmonised, echoing, “ahh-ing” vocals on the choruses mark my favourite moment of the album up to this point, bringing a potent serving of the spooky, surreal components I love in Weaver’s music.  Title track ‘Flock’ pulls out all the stops for the epic bass and rollicking drum pairing, elevating the vocal performance which remains as serene and otherworldly as ever.  I particularly like how they pull back at various points in the track to highlight Weaver’s singing.

The selling points of ‘Flock’ bring attention to what is missing in ‘Sunset Dreams’.  It is in many ways a beautiful composition, fitted out with exciting guitar melodies but is matched with dull, straightforward bass and drums.  This takes away from the more unanticipated aspects of the song and leaves you wondering why it has such little presence.  The ambient, space-y ‘All The Things You Do’ provides a moment of pause, with light percussion and a synth bed on which Weaver breathily sings.  As there is generally a lot of space on this record, it doesn’t feel as well earned as the equivalent track would have on Modern Kosmology.  Final track ‘Solarised’ sounds radically different from the rest of the album and is one of my favourite cuts.  It has a playful, mid-2000s Madonna feel which plays out at a spooky, mid-tempo.  Its whirling, highly textural layers of synths sound three dimensional, jumping out and sparkling at you.

Flock is as multi-layered as you’d expect from Weaver but untypically there is less of a pulse running through this crop of songs.  The melodies and ideas are there, but there is a lack of presence in the mix bringing it all together.  There are fewer “punch the air” moments and satisfying crescendos than the songs could have allowed for.  At its best moments though (‘Flock’, ‘Solarised’, ‘Modern Reputation’) it has all of the magic and thrill of Jane Weaver’s top work.

Flock is out now on Fire Records.