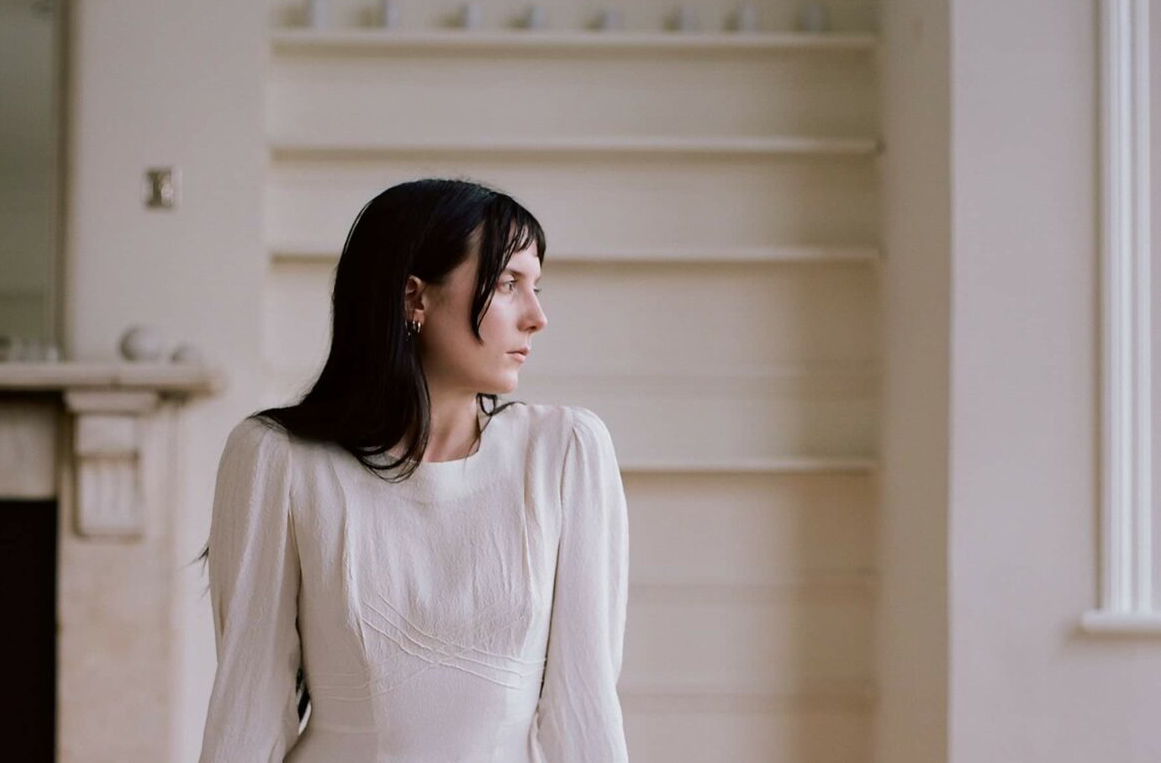 “I’m investigating the moment and exploring. I want everything I do, to be something completely immersive. That’s what I want you to experience when you listen to the music. It’s not easy listening, you are being activated and being guided through an experience that doesn’t allow you to come up for air, until its over.”

Martha Skye Murphy is explaining vividly what she is creating with her work. Whether it takes the form of theatre, acting or music. Murphy is a striking bold challenging multidisciplinary artist who isn’t just releasing songs, but inviting you into her worlds, guiding you towards your own meanings.

She has written a film score, collaborated with producer Dan Carey on his Quarantine series, and featured on the Elevate: A Compilation In Aid Of Calm album, via Dig That Treasure.

She also acts, has toured the UK with the documentary theatre company I Swear I Saw This, in one-woman show ‘Two Body Problem’.

She released her excellent EP ‘Yours Truly’ at the end of 2020. It came off the back of the ‘Heal’ EP, and cemented a reputation for wonderful spectral and slightly unsettling songwriting invested with the kind of majestic, peeling back of the curtain of reality that the likes of PJ Harvey and Joanna Newsome can conjure. These sparse, piano-led arrangements ripple with Murphy’s exquisitely artful tone, sitting on the razor’s edge of beautiful and sinister.

Based in London and informed by Serge Gainsbourg, Murphy provided vocals on Nick Cave and The Bad Seeds’ album ‘Push the Sky Away’ in 2013. Martha’s striking solo work similarly looks to push the limits of contemporary musical norms.

“I’ve just been wanting the white sky to clear and reveal some blue sky,” Murphy offers hopefully, as we start our conversation. “I’m writing and recording sort of incessantly over the next couple of weeks. I’m very busy – I’m working on quite a lot of collaborations.”

One such collaboration is a recent release with rising band Squid where she lent her ominous whispered vocals to the track ‘Narrator’.

“We first started talking about it during End of the Road festival, I think it was 2019, and then we went and worked on it – they were renting a studio from Moshi Moshi in Margate and I went up there and we just jammed. Ollie and I had spoken about some ideas for lyrics and what he was kind of wanting to write about. And then we performed the song. I went away and wrote my part. And we worked on it in Margate, and then we performed it at the Windmill for Independent Venue Week.”

“(Speedy Wunderground’s) Dan Carey was there and then the next time we performed it was when we were recording it at Dan Carey’s studio in Stratham. So it kind of still had this live feeling, that’s intrinsic to Dan Carey’s practice. It hadn’t been overworked. And I mean, it was a finished piece of music, but it had the same energy (from) in the Windmill when we last performed it.”

Murphy describes her ‘Yours Truly‘ EP as “a children’s book for adults.” The narrator on ‘Yours Truly’ oscillates between the vocal character of a child, ruminating on the vulnerability of being an adult. Normalising the fluctuating emotions an adult’s perspective might deem unstable; and a thoughtful protagonist who alludes to Russian politics, Greek legend, the Mafia, contemporary psychoanalysis, digital ethics, profiling and surveillance capitalism.

She says, “The best way of disguising yourself is through the appearance of truth. These songs are my exploration of that. They are the raw skin underneath a scab”.

She describes a starkly ascending piano motif across ‘Outis’ as her ‘analogue inversion of a Shepard tone’.

Above this Martha emotes surreal, existential fragments of poetry, her voice is reminiscent of Kate Bush or Jenny Hval in its artful improvisatory, hushed style that sounds like a whisper in the ear.

The title track ‘Yours Truly’ is co-produced and mixed by Andrew Sarlo (Big Thief, Bon Iver). The final track and lead single ‘Self Tape’ is extraordinary, rippling pianos and ladled with experimental flourishes are invested with a devastating quivering intimate vocal performance quivering with a raw self-revelation that bewitches and beguiles.

Two personal favourite pieces on the EP, they are striking and challenging yet still have threads of accessibility buried beneath.

“I think those two are interesting ones to pick out from that EP because they’re not conventional in their structures,” she notes.

“And the way I approach writing is exemplified in those two because they’re about sort of surrounding the listener. And providing them with a world that doesn’t explain everything, But it is so immersive that you can’t necessarily escape it. And hopefully lyrically, what I’m doing is depositing reference points that hopefully trigger some kind of reaction. Universal references or more vague references that, just hopefully, will stimulate something intimate within you, while you’re experiencing something from someone else. I am just trying to turn people inwards.

Murphy doesn’t want to be prescriptive. She doesn’t want to explain exactly what the songs are about. To allow the listener to sort of make up their own whatever their impression is.

“Well, I think the intention is really to engender meaning for someone else. Yeah. So for me to explain to you what I was thinking or writing specifically about is almost kind of pointless, because really, the point of my work is to trigger as many interpretations and ultimately kind of make people reflect on their inner sanctums”.

“It’s not necessarily me that I’m writing about. I write very briefly, using snippets of conversations that I’ve had, in a kind of cut-up fashion, like Bowie but hopefully not as cruelly as him,” she explains.

Some listeners criticize artists for creating artifice. But art is always an expression of many different things. It’s not just ‘this is my truth’ from the artist’s point of view.

“That’s something I’m always attracted to, artists who I don’t know if I can necessarily trust because it’s just more challenging and more exciting really to listen to. I love people like Loudon Wainwright. Even someone like Neil Young who monopolizes on that distinction between honest raw, autobiographical narrative and storytelling.”

Lana Del Rey was attacked as fake when she initially emerged, but  created an artistic persona containing elements of truth, with something to say and exposes the fallacy of the American dream.

The songs  on the EP apart from the title track were produced by Fabian Prynn at 4AD Studios.

“I go into the studio with finished pieces, and then it’s about realizing them, and fleshing the experience to the most sensational it can be,” she enthuses. “I personally work in a very instantaneous way. I’m purposefully illiterate with logic and Pro Tools because I want there to be an immediacy to all of my production and all of my writing. So I do need the studio experience in order to be able to channel as much like raw energy into it as possible.”

Murphy’s use of samples for example a tone on ‘Self Tape‘ immediately disorientates an achingly raw moment.

“I use certain samples and different use of instrumentation,” she explains. “I am constantly trying to unsettle the experience of listening. So anything that comes in whether it’s an industrial pounding or very intimate voice memo sample that I’ve snuck in there, they’re not all obvious. So there are sort of hidden secrets and, and ways of interrupting the narrative or the sound constantly. You’re never really safe.”

“What’s influencing me sonically is just a lot of choral music. I’m going back into the pure sort of soundscape world where the voice was the instrument doing all the work. I’ve been listening to a lot of Alfredo Tabernero, Thomas Tallis and Gorecki. And yeah, a lot of opera.”

When asked of her older material she explains she operates on two platforms, two levels artistically.

“I’ve got at least one other EP hidden away on Bandcamp. Yeah. I kind of have two outputs, really. Both of them contextualize each other. But they’re not necessarily kind of destined to be connected.”

“I have this EP called ‘The Late Departure’, which is on Bandcamp. Which you may not have found yet, which is fine, it’s meant to exist as almost like Sonic ether.”

The Late Departure was created as a score for this enigmatic motion picture directed by Ivan Krzeszowiec.

“What I want is for people to engage with it. And so whether that’s by the means of lyrics, or song structure, or sound beds, or whatever the sonic kind of framework is, I’m always trying to activate the listener. I don’t want easy listening”.

Given her artistic vision and use of multi-disciplines, one can’t help but wonder what a Martha Skye Murphy live show is like.

“To give an example, the last show that I was able to do, before we went into hell,” she laughs, “was a curated evening where I commissioned a painter to create a beautiful painting behind us as a backdrop, but backdrop undermines the work – it was an incredible piece in itself. So the experience of the music live is also interdisciplinary, whether that’s a painting that I’ve commissioned, or I also experiment with stimulating other senses during that experience of watching the music. I think the shows are very performative.”

“So in the same way, as each song hopefully captures, a different character, not feeling, but a different kind of story. There’s also this sense of a kind of oscillating narrator and orator that I function as – both as this kind of omniscient voice guiding the experience through the whole set,” She notes.

“But then also this performer who becomes other entities within each song. So I’m very aware of the kind of playing with actual reality, anticipating and engaging with my audience in uncomfortable ways, to imitate the experience of the recordings.”