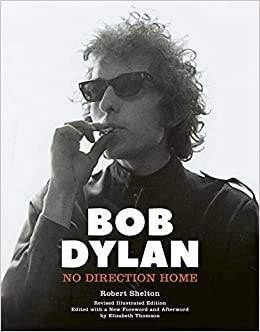 Captured on the cover of this new edition of Robert Shelton’s book No Direction Home, Bob Dylan stares into the middle distance from behind an impenetrable pair of Ray-Ban Wayfarer sunglasses and under a shock of electrified black curls, taking one final drag on his Marlboro cigarette. A picture of insouciant cool, he was 23 years of age at the time and about to release Bringing It All Back Home, Highway 61 Revisited and Blonde on Blonde in a 15 month period, three epochal albums that would change the complexion of popular music irrevocably and forever.

Bob Dylan has long since firmly established himself as a modern cultural icon and is now, almost unbelievably, only a few weeks shy of his 80th birthday. To commemorate the occasion, No Direction Home – first published in 1986 – has been revised, edited and abridged by Elizabeth Thomson (who knew Robert Shelton as a mentor and friend for the last 15 years of his life) and comes to us here in illustrated form complete with more than 150 colour images.

There have been hundreds upon hundreds of books written about Bob Dylan through the ages but to this day No Direction Home, with its title taken from a line in his song ‘Like A Rolling Stone’, remains unique. It is still the only biography that has been written with his active cooperation. ​

The backstory to the book’s creation has been told many times before. Robert Shelton, then the music and film critic for the New York Times, wrote the first major review of a live performance by Bob Dylan (in September 1961 at Gerde’s Folk City in New York’s West Village). This glowing review – including the most prescient of observations; “one of the most distinctive stylists to play in a Manhattan cabaret in months . . . it matters less where he has been than where he is going, and that would seem to be straight up” – helped Dylan’s career take off and secure his first recording contract with Columbia Records.

A friendship between both men developed and over the following two decades they remained in sporadic contact. This friendship afforded Shelton the opportunity to speak to Bob Dylan’s parents, his younger brother and many of his friends and peers from when they all grew up together in the 1950s in the musician’s home town of Hibbing, Minnesota.

From this incredibly rich, unparalleled and never-to-be-repeated source material and over the course of 20 years, Robert Shelton wrote No Direction Home. It originally weighed in with more than 200,000 words. To commemorate Bob Dylan’s 70th birthday ten years ago an updated and expanded edition was then published. It added a further 20,000 words that had been left out of the original edition due to space limitations. By any calculation, it was a mighty tome. This latest edition of the book, however, skilfully abridges that text and in doing so makes it eminently more digestible.

What remains, though, is still a most carefully researched and highly detailed account of its subject and an equally thorough portrayal of the era, location and prevailing culture from which Bob Dylan’s remarkable talent emerged.  The book is at its strongest during Dylan’s formative years and the early stages of his career. During this period from his childhood days up to his motorcycle accident in July 1966, No Direction Home provides us with an excellent commentary upon his personal and professional development. And whilst you are left with a firm belief that Dylan’s growing fame and increasing circumspection about what he actually says to Shelton are almost inextricably linked, the reader is afforded considerable insight into his lifestyle, creative influences and writing processes during his time in New York City in the early ‘60s.

“He would sit at a table in some cheesy little luncheonette and write. He would write in his little spiral notebook while drinking coffee.” Suze Rotolo, Bob Dylan’s girlfriend between 1961-64, and pictured with him on the cover of his 1963 album The Freewheelin’ Bob Dylan. 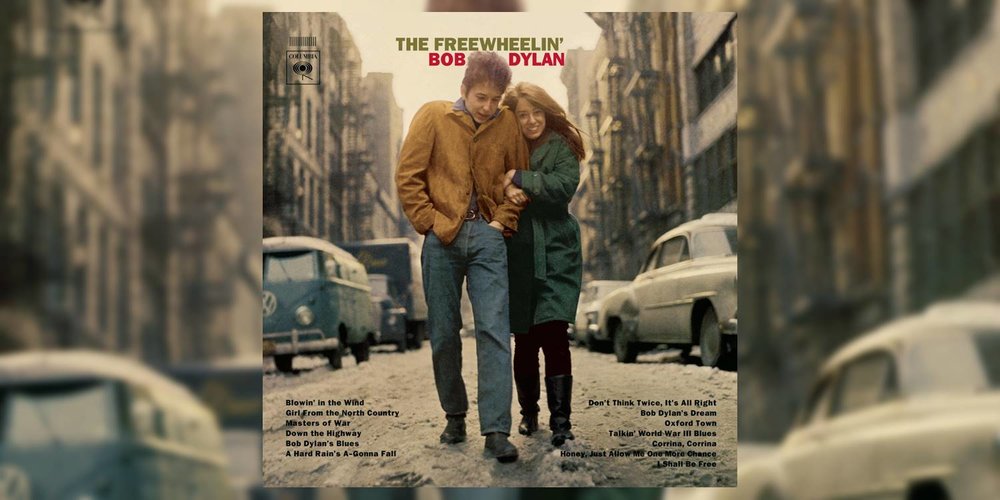 The book feels far less assured from then until June 1978 when Bob Dylan played six concerts at the Earls Court Exhibition Centre in London. It is at that point Robert Shelton’s story ends. You are left with the sense that during this 12 year period Shelton mostly lost contact with Dylan and the two men had somehow re-enacted the title of Dylan’s 1966 song ‘Most Likely You Go Your Way (and I’ll Go Mine).’ It is a period that many observers would regard as being Dylan’s best, producing as it did the masterpiece that is Blood on the Tracks, not to mention Desire and Street Legal. There is also the deterioration and eventual breakdown of Dylan’s relationship with his wife Sara; the extraordinary Rolling Thunder Revue show of North America in 1975; and the great controversy surrounding Dylan’s religious conversion in the late ‘70s and the subsequent expressions of his newly-found faith, none of which are addressed here in any great detail.

As such, No Direction Home may have benefited from ending its story in 1966. That said, after all of these years, it still remains the definitive Dylan biography. With its subject’s consent and access to a wide range of authentic sources coupled to the writer’s keen eye for detail, No Direction Home transports the reader right back into those artistically febrile times. Along the way, it provides us with an invaluable account of the changes in America’s social and cultural milieu, one that runs parallel to the seismic transformation of Bob Dylan not only as an individual but also as a songwriter and performer, enabling us to witness first hand his emergence as a voice for a generation.

The revised illustrated edition of No Direction Home by Robert Shelton, edited with a new Foreword and Afterword by Elizabeth Thomson, is published by Palazzo on 15th April 2021.