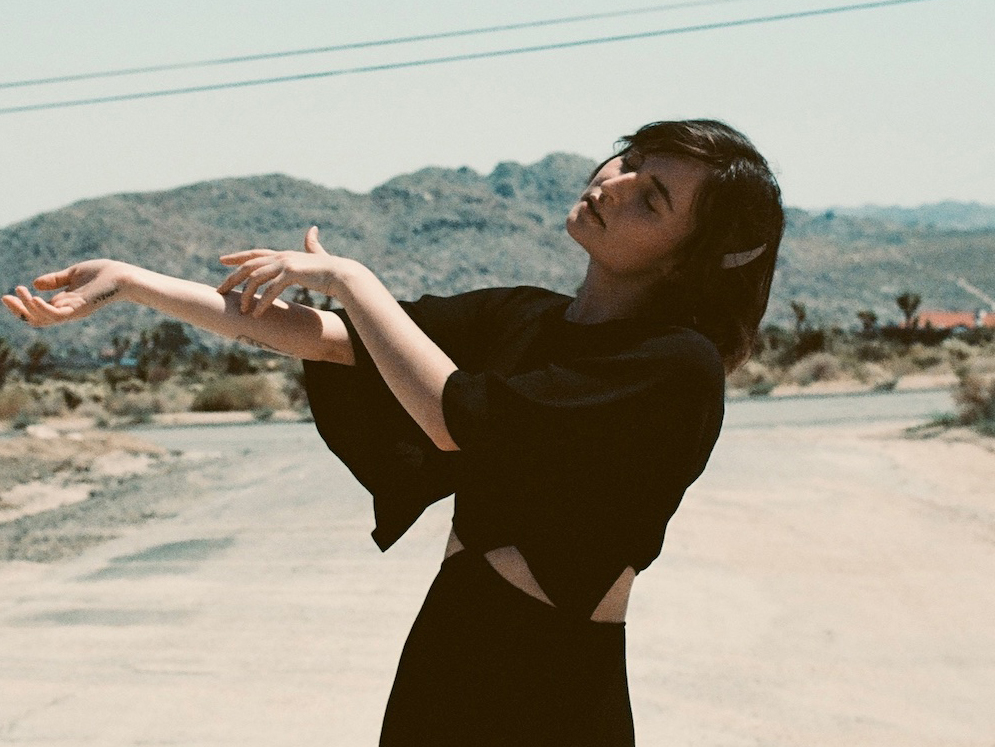 Austin, Texas based musician Tyler Dozier releases her debut album as Lady Dan, I Am the Prophet, on April 23 via Earth Libraries. The album is deeply personal, touching upon the different pressures and challenges that Dozier has faced in her life, such as growing up in a strict religious environment and experiencing being in a controlling relationship. It was at the crossroads of being pulled in these different directions that the album was birthed, with Dozier taking ownership of her life, discovering an enlightenment within herself that is reflected within these songs.

Veering sonically between country/folk and indie-rock, I Am the Prophet pulls together quite beautifully emotional honesty, biblical imagery, and strikingly poetic lyrics. Overall, this is a heartfelt album that sincerely grips you and doesn’t let go. The songs rouse you and the feeling of transformation that is core through these songs is quite transfixing and inspiring. Dozier is a highly skilled songwriter and we adore this album. I interviewed Dozier and we delved into her songwriting, her musical influences, and how the album formed and took shape.

I have been hugely enjoying your debut album I am the Prophet. I think it’s such a fantastic collection of songs, holding many layers, and it stirred a lot within me. What sparked the idea for album and how did it take shape?

Thank you! That is so encouraging to hear. This album was a long time in the making, but the songs seem to tie together in a way that really just tells me: I’ve been learning the same lessons over and over. haha. The main ribbon tying it all together is the idea of reclaiming ownership of myself- whether that was through rebellion or autonomy. I’m learning how to belong wholly to myself.

I also found the cover art compelling, where there are two of you, side by side. What inspired this cover art?

I had seen this black and white image of two women, clearly best friends, sitting at a table in their kitchen having wine together. There was something about the photo that made me want to just look at it forever – I still love looking at it. Then I thought, what if I made my album cover a photo like this, but both women were me? Not only could it be a little unsettling to the viewer (I love to unsettle people), but I think it speaks volumes on how I feel about myself. I’m my own best friend, and at the end of the day, I am all I have.

In early 2020, you returned to your hometown and a one-room cabin for six weeks – what was the process like of writing and recording this album?

Recording with Jeremy Clark was such a dream. There were obvious safety protocols and restrictions due to Covid, and I’m sad I didn’t get to better know a lot of the musicians that worked on this record. Regardless, we had a killer time in the studio everyday and I truly witnessed so much magic watching Jeremy make these songs into masterpieces. Those six weeks in Alabama were the reset that I needed before recording this record. I was mostly alone, so of course I had plenty of time to think and process, but also to sing out all those bad first ideas until they could evolve into what they are now. haha. A big portion of this record is like the diary to my early twenties and it’s already been so healing for me to release this work. To finally say out loud how I’ve been feeling all these years. I’ll be twenty-six the week my record releases, and I couldn’t ask for a better time to release my early twenties to the gods.

My favourite song on the album is ‘Paradox’. What an opener! I loved the lyrics: ”A paradox, a woman of stone/ To want to be loved and left alone/I am blindingly cold and numb/I am too hot for my tongue”. What was the inspiration behind this track?

It looks like you and I have the same favorite track! haha. This song was fully inspired by my inner conflict of wanting full, untouchable autonomy while also having a radical, infiltrating love. I still can’t decide. I love having my options, so I may never figure it out.

I also loved Misandrist to Most and its statement: “I’ll be my own savior, I’ll be my own best man”. As a woman there were many lines in this song that resonated with me. What inspired this song, for you?

I’m really motivated by spite, you’ll find. I wrote this song around a time in my early twenties when I started to recognize all the places in my life I was putting on hold and waiting for some perfect savior man. Once I realized that men let me down far more often than they benefit me, I scribbled this one out as a vow to myself. And this one is NOT for the boys, not sorry. This one is to inspire the girls, gays, and theys to be what they seek.

The track ‘No Home’ I think is also such a brilliant song with such gripping lyrics. I love the video too – can you tell us what it was like filming this?

Hahaha. This video shoot was a little stressful. Until the final verse, the video is one continuous shot. It was a lot of me undressing, and redressing, and undressing, only to get dressed again. It was also a rather HOT day in Joshua Tree. Hannah and Joeli were fabulous during that shoot, allowing me to give direction and humor me when we needed to start all over again due to a bad take. However, we ended up finishing that video shoot much earlier than we expected, and that’s the power of forethought and a shot list.

There are so many great lyrics on this album that I think will resonate, and have deep meaning, for many listeners. What role and importance does songwriting have in your life?

You know, I’ve recently been able to admit to myself that songwriting is the only outlet I use to be honest about my feelings. I value therapy and you can catch me spilling my guts to my therapist every week, but songwriting has also taken a big role in my life as another form of therapy. It’s like the ultimate processing of events to me, and it allows me to do so boldly.

How did you decide the order that the songs appear on the album in? Was there a clear opening and closing song for you?

For the most part, I chose the order based on a sonic flow- what fit and made sense one after the other. However, I was intentional on opening with Paradox, because I wanted a strong statement up front: “This is who I am, how I feel, and what I’m about.” I was also intentional with Left-Handed Lover as the closing track. Yet another song about conflicting feelings, more or less focused on a lost love. It ends with the line “I’m getting older.” It’s a lament for my own mortality.

The songs on the album are very personal – how does it feel sharing them with the wider world?

It’s terrifying and also freeing. Like I said, It’s basically my diary that I’m sharing with the world, whether they take it at face value, or just chalk it up to good storytelling. I’m hoping for a shift in myself, where I can leave all these moments behind and stop dwelling on them. Onto new things, new sounds, new subjects.

I had a big Bright Eyes obsession when I was about 13, and I remember that being the first band that made me daydream about writing my own music. Then, as I got older, I discovered British folk music – including Laura Marling– that caused me to pick up a guitar and start writing my own songs. At this point in my life, I pull musical influence from a plethora of genres and the list would just go on and on.

What track from the new album do you most look forward to playing live?

The idea of playing live, after such a long break, puts knots in my stomach! haha. However, I’d have to say “I Am The Prophet” title track takes the cake on that one. It’s so packed with abrasive emotions and powerful lyrics that I think it will really resonate live.

What is the best concert that you have ever been to, and why?

Oh boy, what a Q! Well, I saw a co-headlining tour of James Taylor and Bonnie Raitt back in 2017, and I’ll never forget it. Both of these artists hold such a soft place in my heart for their own reasons and I never imagined I’d get to see them both live. Not to mention at the same show. I cried for the duration of James Taylor’s opening song, ‘Carolina In My Mind’. And you should know Bonnie can still shred and sing like she’s twenty years old! What an iconic woman.

What music or literature has made an impact on you during the past year?

Oh, you want to talk quarantine entertainment! Of course, Laura Marling’s ‘Song For Our Daughter’ was exactly what I needed during lockdown, and I found myself moved more and more by Andy Shauf’s ‘The Neon Skyline’ with each listen (about once through per day). As far as literature is concerned, I started and didn’t finish a lot of books during lockdown. I’d like to say I was impacted by any of them, but I’d rather not mention how much I enjoyed Midnight Sun…

Expensive and oftentimes boring. I don’t think a lot of people would expect that it could be just as boring as any other job, but it’s just my type of boring. All the same, my eight-year-old self would be absolutely geeking that she actually became a musician, and I like to remind myself of that as often as possible.

The beginning of lockdown was mentally tough for me, as we all have collective trauma from it. I try to keep an eye on my drinking, I stay in talk therapy, and try to get as much sunshine as I can. Lonely and depressing days still manage to creep up, but you have to take them as they come and try to be good to yourself. I’ve heard a lot of artists talk about how they haven’t utilized the lockdown to make a bunch of music, as our workaholic “American Dream” would have us do. And I fall into that category as well. I’ve dabbled in making some punk songs, but haven’t been putting too much pressure on myself to be productive, aside from finishing and making this record. Again, coping and surviving has a lot to do with being kind to yourself.

Step one: Get the vaccine!! Step two: plan a UK tour. (I have some surprises up my sleeve, but telling them now would be no fun.)

I am the Prophet is out on April 23 via Earth Libraries.