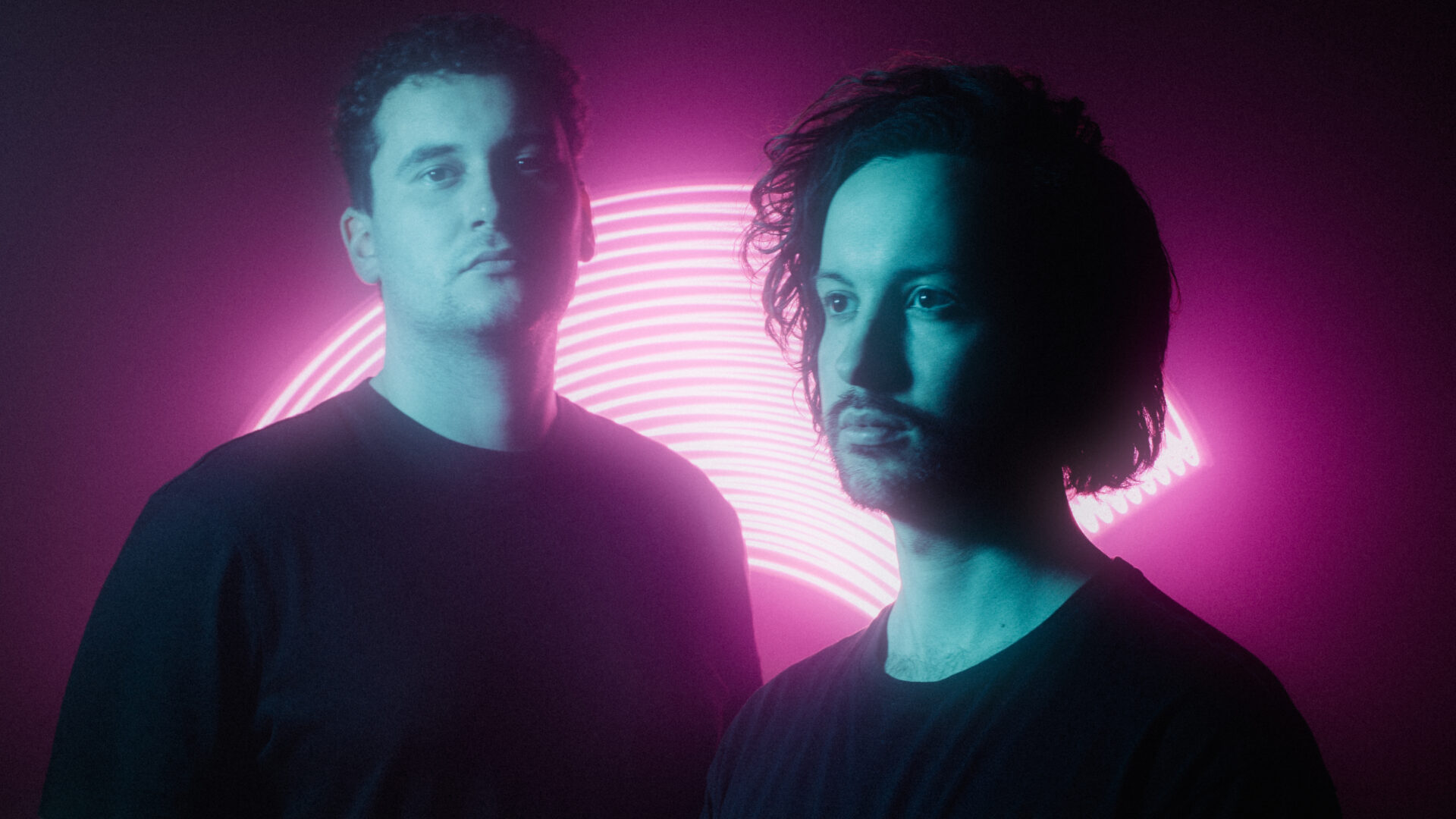 Bristol based melancholic pop duo Yard Arms, comprised of Noah Villeneuve and Billy Golding, recently released ‘Hollow Ankles’ – a song and video which utterly captured our hearts. The track is their first single release since their EP Sanctuary Lines, which came out last year. Prior to this, the duo had released the EPs Maiden (2018) and A Glossary of Broken Humans & Beating Hearts (2019).

Yarm Arms have such a skill for making beautiful music that aches within you, but also offers hope and comfort. Their emotionally honest and vulnerable lyrics, combined with masterfully infectious melody, makes them so irresistible. We look forward to their future music with huge anticipation.

I interviewed frontman and lyricist Noah and we delved into the ideas behind ‘Hollow Ankles’ and their previous EPs, the role of songwriting, favourite songs to perform at karaoke, and I posed him a tough challenge: naming his ultimate ‘90s song.

How did you both meet? And when did you have the idea to form Yard Arms?

We met when we were twelve, on a football pitch and we’ve been playing music together since we were thirteen. Yard Arms took shape in 2018 after a bit of a creatively stale period for us both. Starting the project was a very organic process of just wanting to be back in a room writing songs that were authentic to us without any ulterior motives.

‘Hollow Ankles’ is such a striking and beautiful song filled with emotional honesty. Can you tell us about the inspiration behind this track?

The main theme of the song is focused on acknowledging weakness. Exploring the difficulties around feeling helpless around the helpless. I guess it’s also a narrative of support, embracing the concept of ‘its okay to not be okay today’.

Is the track a standalone release or will it be on a forthcoming EP?

It’s a little something to keep you going. There’s more to come later in the year.

The music video is also so fun and memorable – I adored it. Can you tell us about what it was like making this?

Thank you – we’re glad to hear it. We had a great time filming it…once we were able to actually find locations and dates that were safe to do so. We came up with the concept many months before we could actually try and make it happen but once we found a way, our videographer Kieran Gallop absolutely nailed it. It was important for us that the video juxtaposed the nature of the lyrics, we’re constantly seeking that Smiths-esque balance.

Connected to this, what is your favourite song to perform in karaoke, and why?

I’m going to say it’s a toss up between ‘The Boys Of Summer’ by Don Henley, ‘2 Become 1’ by Spice Girls or ‘Hero’ by Enrique Iglesias – all the feels, I need to demonstrate as much emotion and fist clenching throughout.

I’ve been hugely enjoying your most recent EP Sanctuary Lines. Could you tell us what sparked the idea for the EP and how it then took shape?

Sanctuary Lines was written during the latter half of 2019 and recorded at the beginning of 2020 and eventually became our pandemic/lockdown output. The four songs on that record have had such a dynamic journey over the course of the last 18 months that they probably have a more unique place in our hearts more than any others. It’s certainly the collection of songs we’re most proud of and demonstrates the sounds and sentiments we’ve always strived to achieve with Yard Arms. It’s another level of strange that we’ve never played any of the songs at a show so there’s still plenty of life in them yet when it comes to our live performances.

I also loved the single from it – ‘These Four Walls’ – can you tell us about the inspiration behind this song?

TFW started out as one thing and later became something so unexpectedly different. That path demonstrated the beauty of creativity, writing and how art can completely take on a life of its own once in the public domain. Initially, I was writing about the idea of missing the ‘honeymoon period’ in a relationship, being so enthralled by new connections and the beautiful, exciting naivety of getting to know someone romantically and shutting the doors on everything else around you. The fact that this song came out in the summer of 2020, inevitably meant that ‘These Four Walls’ would be interpreted somewhat differently. We wanted to make sure people knew we weren’t trying to piggyback on playing the tortured musician in lockdown caricature (as ultimately, we felt lucky to have our health and rooves over our heads), but this song ended up becoming a sort of accidental isolation anthem for us all and now serves as a neat little time capsule for that insane time in our lives.

I’ve also been impressed by your previous EP releases. A Glossary of Broken Humans and Beating Hearts in particular is such a brilliant collection of songs – especially ‘Idea of Me & You’. What was it like recording this EP?

This was our second EP and thematically darkest of the three thus far. It felt like we really hit our stride with this release in terms of writing and exploring what we could do with the production to set it apart from the Maiden EP. I think you can hear that we’re more comfortable in what we’re doing overall with those songs yet there’s still a severe honesty and vulnerability to the lyrics which I think has been the one mainstay throughout the catalogue. We were getting more into different synthesizer sounds, introducing horn parts and when it came to writing, there was a lot less of second guessing ourselves and just trying to serve the songs the best we could. That EP probably has the most fragility yet intensity about it, it’s a fitting documentation of that time in our lives.

How does the songwriting work, as a duo? Do you both write the songs together?

Generally, I (Noah) will bring in an idea and that could be as simple as a melody or chord pattern or it could be something more fully fleshed out resembling a finished song. We then play around with it together in the rehearsal room for what could be hours, days or months depending on our attention to detail or vigour for the tune. Safe to say, there’s no specific formula for the way we write and it’s important to us to be that way to keep things unpredictable and motivating.

It’s an essential part of being – no two ways about it. We need it in our lives to thrive and feel accomplished, always have done.

We both grew up with such eclectic influences and sounds around us but probably a key component to our understanding, passion and freedom with writing came from what we indulged in during our mid to late teens. There was a big focus on Midwest emo, post-rock, math rock and UK post hardcore. It was a huge learning curve for us being around that music and it has a dear place in our nostalgic hearts. Bands like American Football, Minus The Bear, This Will Destroy You, TTNG, Sigur Ros, early Biffy and the like had a huge impact on those years.

What is your favourite song from the 1990s, and why?

‘You Get What You Give’ – New Radicals. Ok, it’s not my favourite 90s song but that question is mighty tough so I’m telling you one that has been stuck in my head recently! You can’t deny the tune absolutely slams though.

Our tastes have been pretty erratic over the last year and we’ve actually probably been either listening mostly to podcasts or something instrumental as opposed to anything that sounds like us. We’re constantly inspired by our creative friends and people around us in the area making undeniably good music so go check out the recent releases from Phoxjaw, Katy J Pearson, Lice, Conal Kelly, Goan Dogs, Giant Swan, James Humphrys, Soot Sprite & Bridges.

You’ll be supporting The Slow Readers Club at the Thekla in Bristol in October. What part of playing live again are you most looking forward to?

Being able to reconnect with other human beings in a room whilst playing our songs, we are very much looking forward to that.

Finally, what are your tentative plans for the rest of 2021?

‘Hollow Ankles’ is out now.