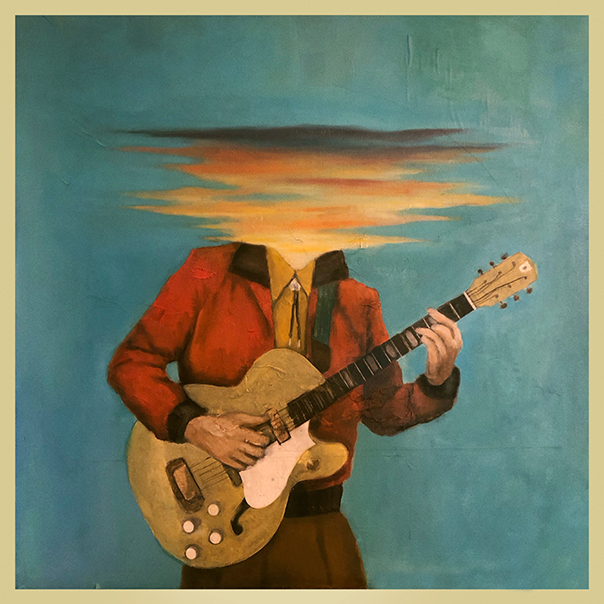 “It was like some long, lost dream come to life, a forgotten classic from a parallel dimension, the echo of a memory that wasn’t mine. But the feelin’ was real.” –  Mr Tubbs Tarbell

It’s not often nowadays that a record studio has a great significance on the concept of the album – well not in the same gravity as The Beatles’ Abbey Road – and instead is often merely a production detail, alongside the sound engineer. However Whispering Pines – an almost hidden Los Angeles-situated place in which Lord Huron has recorded their fourth LP Long Lost – is so important that it’s actually the starting point for their new album’s ideas. Custom built for good acoustics in the 1960s – rumour has it for Sam Cooke – it was abandoned until Ben Schneider and his bandmates (Mark Barry, Miguel Briseño and Tom Renaud) bought it seven years ago through Craigslist. It still has much of the décor of decades gone by and the fact that it had not been used for 20 years or so sparked into alive the already imaginative Lord Huron into wondering what the history of the place would be like. Questions such as: who recorded here before? Do their ghosts still linger around the sound booth? From Lonesome Dreams, to Strange Trails to Vide Noir, all three of their previous records have songs written from the perspective of fictional characters – who could forget the World Enders gang? – but fourth record Long Lost takes this one step further by pretending that their songs are actually written and performed by other people, hinting that it could be the ghosts of the Whispering Pines record studio. Imagine The Shining if it were a music production setting, rather than a hotel.

As is custom before the release of Lord Huron albums, the Los Angeles group teased their fans with obscure trailers and mysterious music videos, as well cryptic Instagram posts. In the videos we see a fictional guitarist Roy Casey, actors in films and a made-up band called Phantom Riders, all performing their craft with blurred-out heads. But most significantly is the commercial advertising the best records from Whispering Pines studio – from Frankie Lou, Handsome Scott, Leigh Green, Donny & Midge (this is the song which is actually performed with singer Allison Ponthier called ‘I Lied’) and L’ile Cosmique. The advert is convincing but they all the aforementioned are fabricated artists. The backstory goes further with Mr Tubbs Tarbell, a Cowboy-style record producer who wrote a letter describing how the album Long Lost came to be. A spiritual accident. The songs came to him through some paranormal experience and were being performed by musicians who appeared and quickly disappeared like a mirage.

And that’s the magic of Long Lost, an enjoyable collection of great western-tinged country and rock’n’roll songs (‘Not Dead Yet’ is unapologetically Elvis) that are nostalgically authentic but have a lingering haunting context. Are they ghosts or are Lord Huron possessed by the previous inhabitants of the Whispering Pine Record studio? This creepiness is pushed further by the sinister commercial voiceover: “Get lost in tales of hard luck, heartbreak and redemption, delivered with an honest that will haunt you from years to come.”/”So bring them on home today, you’d be glad that you did, you’ll be sorry if you don’t.” What happens if we don’t buy them? To add to the illusion the album is actually an array of deceased musicians, rather than Lord Huron themselves – the record features interludes of a TV host introducing the different musicians, accompanied by audience applause.

The songs themselves though tie in neatly with the rest of Lord Huron’s catalogue, in that they reference their own previous songs, feature desperately lonesome characters that look to the skies for answers, as they wander through the wilderness either seeking misplaced love or just for escapism. The title-track ‘Long Lost’ is achingly beautiful, the cinematic strings sway as Ben Schneider wishes to liberate himself by going to the mountains, running through the forest and living with nature. Lost on purpose compared to previous occasions in which his characters were accidentally astray.

Overall the central theme to the album is essentially the idea of leaving a legacy behind. ‘Mine Forever’ has a great swinging rhythm with female backing voices and handclaps, as well as ending with a supposed clip from a French film translating as: “I will not forget you. I’ll leave you in the fading light. Can you live until you die. “ ‘Twenty Long Years’ is Schneider predicting the regrets he will feel in two decades time. ‘Drops In The Lake’ has a spine-tingling theremin backing a song where one looks back at their life: “Memories of old crash like waves.” But the best lyrics about time and what legacy one might be leave behind are undoubtedly on the penultimate track ‘What Do It Mean’, with powerful lines such as: “A life spent talking when my epitaph would do” and “Going to fly through my life till I crash into the ending”.

‘Long Lost’ ends with the 14-minute cosmic instrumental ‘Time’s Blur’. Lord Huron recycle the album’s previous tracks into an ambient Brian Eno-reminiscent soundscape. It imagines what their songs would sound like when transmitting from a radio studio into the never-ending length of space. Proving that songs never die, they keep living on. As Whispering Pines studio producer Mr Tubbs Tarbell said in his letter: “Time washes aways what man creates, but ‘Long Lost’ might convince you that a note can live on.”