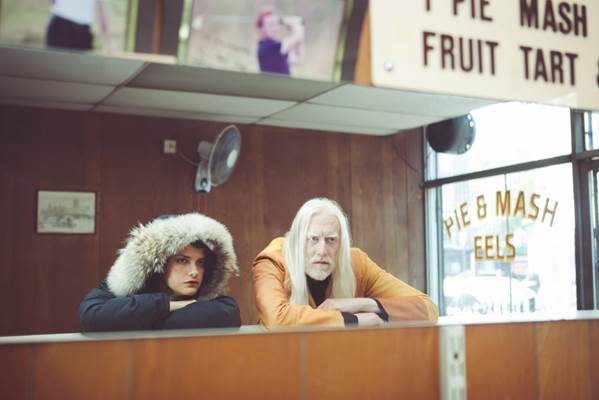 David Wrench and Evangeline Ling – aka audiobooks – have revealed details of their second full length album, Astro Tough, due for release 1 October 2021 via Heavenly Recordings. They have also shared the album’s opening track and first single, ‘The Doll,’ with illuminating electro backdrops and Ling’s intriguing and unsettling narrative: the single is accompanied by a clip directed by Paul Kelly.

Based on a childhood memory infused with ambiguity and open to interpretation, ‘The Doll’ is a bereavement curve set to music and deals with the stages of grief from loss and denial to acceptance. The accompanying video depicts a child exploring typically crowded spaces left empty during the pandemic in South London and Kent.

“I had the idea for The Doll video while out for a walk,” Wrench explains. “I was watching a child walk confidently, checking their surroundings, taking it all in. I started to recall how the world used to look as a child. I was lucky to grow up in the countryside and to be able to walk alone in nature. My father was a sportsman (he won a Commonwealth medal for Wales for Weightlifting) and a PE teacher, so I used to go with him and spend time in empty sports venues. There is a special atmosphere to places built for crowds when they are empty. It struck me that a video based on a child exploring these empty spaces and finding something that had been lost would make a really fitting film for our track The Doll.”

In 2018 audiobooks threw absolutely everything at their debut album, Now! (in a minute). Its follow-up, Astro Tough, due for release 1 October 2021 via Heavenly Recordings is a record that brims with energy and adventure, but has a narrative.

“The first album was a photograph of the beginnings of the project, recorded without any overall plan,” Wrench explains. “Astro Tough is more scripted, but a script that still allowed for lots of improvised scenes. There was more intention behind the songs, and a lot more refining. We weren’t precious about everything being spontaneous and a first take, like on the first record, even though some of it ended up being that. We made a lot more material for this record but chose the tracks that best worked together as an album.”

Multi-instrumentalist and super-producer/mixer Wrench, known for his work with Frank Ocean, the xx, Caribou, David Byrne, Manic Street Preachers, and Goldfrapp, is as comfortable unleashing monolithic psychedelic wig-outs and heavy dub-driven monsters as he is crafting synth-pop tracks. Writer, vocalist and visual artist Ling is as chameleonic as she is charismatic, able to jump from detachment to rawness to aggression to tenderness to hilarity to toe-curling awkwardness, sometimes within the same song.

Above all else Astro Tough is a record that brims with energy. With their roles diverging more clearly than on their debut – Wrench handles almost all the music, Ling the lyrics and vocals – both dig deeper into the enormous emotional potential of each. “I definitely go to town with my feelings,” says Ling. “If I find I’m in a certain mindset, I’ll go as extreme as I can with it in my lyrics. I know I’m being over-dramatic.”

Even when the coronavirus outbreak put an end to those spirited sessions, audiobooks kept relentlessly fine-tuning; here, Wrench’s production wizardry came in handy. “The album was 95% there at that point, but we still had final bits of lyrics that we had to do over voice memos. Evangeline would sing into her phone and I’d have to do some serious sonic manipulation to make it sit next to vocals recorded on super expensive mics…”