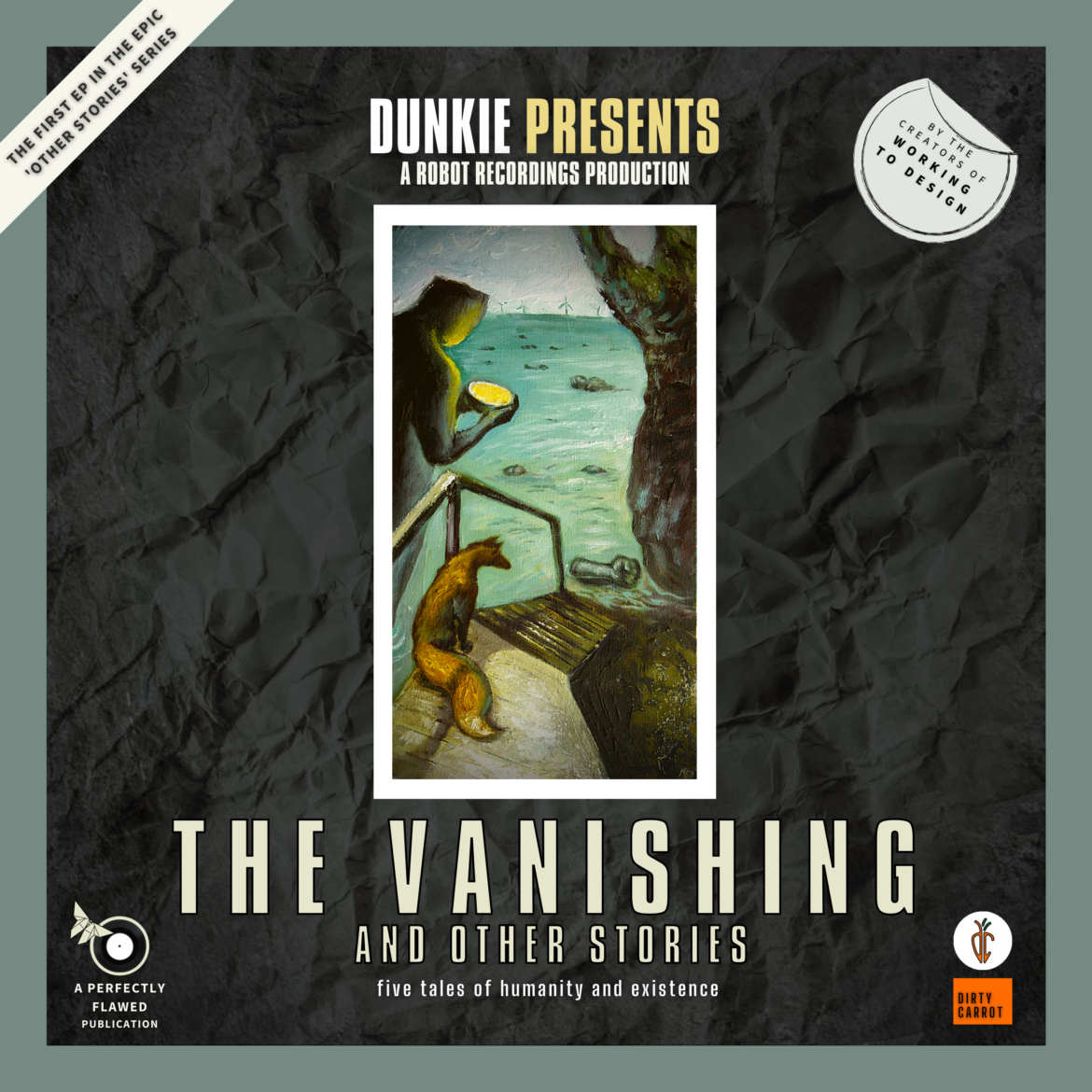 Dunkie is the musical project of singer/songwriter Anthony Price and songwriter/producer Wayne Bassett of Head Noise. Based in the South Wales Valleys towns of Mountain Ash and Aberdare, their work explores universal subjects: life, love, the passage of time, death, loss, healing, hope and rebirth.

In Nov 2020, the band released an ambitious concept album; Working to Design, which included 17 songs partially inspired by the writing of sci-fi author Richard Matheson. Recorded at Robot Recordings Studio in Aberdare, the album is a hugely collaborative affair – featuring more than 30 musicians playing various additional instruments – and was released as an immersive CD package, with the band’s music intertwined with the dramatic, emotional artwork of Welsh artist Michael Gustavius Payne.

Dunkie has also just announced the release of the album on double vinyl, including an 8 page booklet and double A side single. It’s available to pre-order now at this link:

Working to Design is a profoundly personal record, a loose concept album that deals with the memories, lives and deaths of family members, friends and loved ones, and was partly inspired by the loss of Price’s father to cancer and his aunt to dementia.

It’s about family, mortality, and finding hope and strength inside the pain of loss and suffering.

Their new EP The Vanishing and Other Stories – released in March 2021 on independent Newport label Dirty Carrot Records – is another collaborative affair that takes a similar artistic approach to their debut album, with an aesthetic inspired by 1950s and 60s Penguin and Corgi short story anthologies.

Available on Bandcamp for the cheap price of 50p, the record is a set of 5 standalone short stories in musical form, grounded in the mundane but heightened and haunted by the surreal and dark realities that surround us. It’s an eclectic mix of styles and genres, ranging from rock, folk and pop to electronic alt-country.

Thematically, the EP addresses various aspects of loneliness, isolation and fear, inspired by the cultural contexts we’ve all been grappling with during the pandemic of 2020-21.

Dunkie isn’t a ‘band’ in the normal sense of the word; in a live setting, Price performs these songs solo, with an acoustic guitar, and transforms them in the studio. They apply no restrictions as to style, genre or collaboration, inviting friends to play, and simply aiming to make the best recorded versions of the songs, in whatever form and direction they seem to want to take.

The beautiful ballad ‘Choke’ opens intriguingly, with some sinister breathing and the heartbeat-like sound of someone tapping on an acoustic guitar, accompanied by an insistent beeping, as if we’re sitting next to someone in a hospital bed.

This gives way to some virtuosic, slightly Eastern-inflected flute playing, sparse electric piano, and the soulful vocals of guest Mali Davies, seemingly trying to recall fragments of long-lost memories; ‘memories of the daffodils, and the silence in the room, and I choke.’

It’s a vivid song that captures its themes of loss and mourning through the sound world it creates, blossoming into a satisfying climax. These are songs that want to tell you a story, painting an immersive picture without making anything too blatant, leaving it up to the interpretation of the listener but giving you enough detail to create a cathartic picture.

Standout track ‘Deep Dark Heart’ features more guest vocals from Sarah Birch, of Swansea-based band Lost Tuesday Society. The song is essentially a duet, with the pure, beautiful tones of Sarah’s voice intertwining with the baritone of Mark Purnell, asking the question; ‘is it in my head? Or is it in my heart?’

It creates a dark, explorative atmosphere, as if the song is searching for something. In fact, the whole EP has a questioning, yearning feeling to it, as if it’s grasping for glimmers of hope within the bleakly mundane.

The song deals with loneliness and the struggle to affirm your own life; ‘the hardest thing to do is to prove you exist, with every single coat that you paint erased.’

The download copy of the EP includes a bonus track, an acoustic ballad with touches of electronica; ‘The Vanishing (Abertawe Road Studios Session Version)’, and it’s an effective finish, bringing us back to Price’s raw, heartfelt existential-crisis-choirboy voice, reminding us of the primary songwriter behind these songs.

That doesn’t detract from the contributions of the other singers on the EP though – in fact, it’s impressive that Dunkie has managed to weave together a coherent atmosphere from the guest vocalists, conveying their vision by thoughtfully mixing the colours of various voices.

The Vanishing and Other Stories is a collection of great, melancholic pop tunes with thoughtful, immersive production, a worthy successor to the Working to Design LP and a release that’s absolutely worth your time.