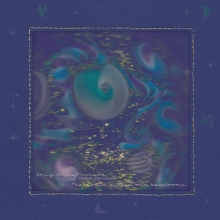 This may be the only review of Drug Store Romeos debut LP from someone who has any experience of their home town Fleet. A fellow alumnus of Farnborough Sixth Form College where they all studied, the area of North East Hampshire is not quite the corn-chewing, wall to wall farmers with cows and sheep blocking all the country roads and everyone going “oooh aaargh” as it’s been made out to be. A tenuous link that it used to be a market town equates for most medium-size hamlets in England.

It’s suburbia. It’s quiet yes but that has more to do with the death of the high street and disappearing pubs and venues than fields and fields as far as the eye can see. Indeed, the Fleet Services on the M3 is part of the pilgrimage for Londoners heading down to Somerset for Glastonbury by car. Country bumpkins, we are not.

The ethereal, minimal sound from the trio may be slightly influenced by their proximity away from the big smoke but has more to do with their personalities, their temperament and their influences. The fields and hedgerows start after Fleet on the Waterloo to Southampton railway that they will have traversed frequently as they ventured up to the capital and their regular Brixton Windmill gigs.

The silent High Street up from the station to the town centre and clear night skies as they alighted from the 1.05am last train from Waterloo in the wee small hours will have been eerie and spectral, the blues and purples of the artwork for the world within our bedrooms appear to mirror this. They appear to interact and create on a different plain, a level most haven’t discovered yet, and maybe never will.

There’s an ethereal, angelic, heavenly, intergalactic atmosphere. They’ve found a new dimension, and although they seem to be on the same planet as the rest of us they behave differently, act different, they make sounds and noises we’ve all heard before seem brand new like they’re being made by some unknown instrument. Another being entirely.

This record is hypnotic, it gets its hooks in and takes you through the looking glass. A fairground organ that feels Magic Roundabout trippy. A nursery rhyme element to the minimal, gentle keys and almost whispered vocals. I once described her voice as like a sinister small voice in your ear, yet now it’s in your head but their intentions are good, or at least not evil. The arrangements are meticulously worked out to allow the space in-between to form the song. Drums are never the same, not just keeping time, songs are built around them, keys are intricate and often sparing, but then bounces and flashes like the dashboard of a rocket. The bass rumbles and dances like the spaceship traversing a meteor shower.

There are seldom bands that want to virtually physically remove you from this plain, this dimension, that want the music to be a colour, to make it a tangible object, to be such a tactile group. Indeed, the album cover is a contorted image of a pendant from Sarah’s childhood, given to her by her grandmother, which she would project herself into, an imaginary world locked within a jewel, that she wanted to make real by creating sounds and atmospheres that conjured images and colours.

When music can be used to create another world, it is the ultimate escapism.