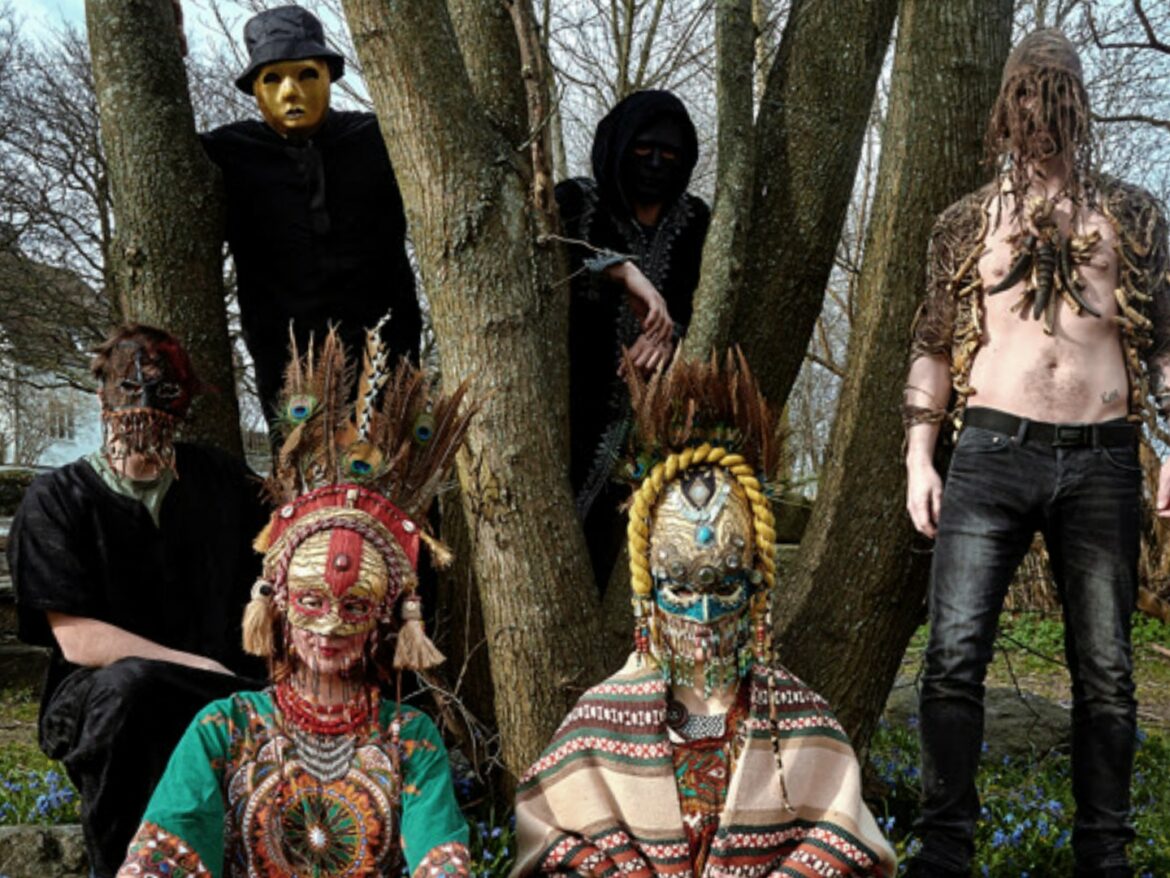 Welcome to Tracks of the Week edition #150. This week editor Bill Cummings, deputy editor Simon Godley and Julia Mason take us through their top picks of recently released new tunes, including Goat, Dead Method, TV People, The Altered Hours, Soft Focus and gglum. We hope, if you’re suffering after the England loss yesterday – or more importantly, reeling from the terrible behaviour of some ‘En-Ger-Land’ fans – this round-up will offer at least a little respite and intrigue. Follow our Tracks of the Week playlist below and dig in!

Goat – Queen of the Underground

Why we love it: ‘I am the Queen of the Underground’ proclaims the presumably masked and anonymous Goat woman on the lead single from the Swedish psychedelic overlords’ forthcoming album, Headsoup. And given the song’s heavy insistence and all-around grooviness who the hell are we to disagree? ‘Queen of the Underground’ is one of two brand new tracks that will feature on Headsoup, a rarities compilation that is otherwise packed to the gunwales with non-album material covering the group’s nine-year recording career and including various singles, B-sides, and unreleased songs. (Simon Godley)

Cardiff artist Dead Method returns with perhaps his most accessible single yet. Dead Method aka Lloyd Best delivers ‘Idle Worship’ a scathing commentary on the creative industry in the shallow age of the influencer, a pushback to the pressure placed on young creatives to be social media stars before they’ve established their talent.

It’s delivered with the kind of fierce soulful knowing of an artist who is able to translate withering put-downs like “you failed to mention that your daddy is a trust fund Tory” and “if your heaven is your only option I think I’d rather burn in hell” into a hooky pop cut. Working with long time collaborator Minas, ‘Idle Worship‘ is perhaps Dead Method’s most pop moment yet, bubbling with iridescent synths and addictive electro-pop beats, it has shades of latter period George Michael or Years and Years about its juxtaposition of floor-filling electro-pop against deeper knowing social commentary.

Dead Method is passionate about championing LGBTQ+ voices in the music industry and has worked with a number of LGBTQ+ artists such as Hvnter and Joe Hythe, striving to centre queer people in everything he does. (Bill Cummings)

TV People – Out of the Silence

Why we love it: Dublin’s TV People recently joined Blowtorch Records and have now released their latest single ‘Out of the Silence’. TV People formed in 2019 and is the project of Paul Donohoe (vocals, guitar) and Brendan Clarke (drums). They took inspiration for the track from the relentlessness, energy and sheer indomitable spirit of Dublin. Vocalist Paul further explains:

“I remember feeling inspired and invigorated by the energy of the city at the time, despite the fact that everything was closed and the weather was dark and grim. The tune is a homage to that timeless energy and presence that certain places have and how you can find comfort in the permanence of these places when you’re feeling a bit lost and dejected.”

There is a dark, brooding sound to ‘Out of Silence’.  The quality of the baritone vocal is striking and perfectly matches the atmosphere of the song.  This is a track full of love for their hometown: “I watch the Liffey bleed along the banks of distant quays // and I awaken when the feeling flows out of the silence”

‘Out of Silence’ was produced and recorded at Darklands Studio in Dublin. Previous singles include ‘String’, ‘Nothing More’, ‘Time Eats Up’ and ‘Kitchen Sinking’ and late summer will see TV People release their debut EP both digitally and on vinyl. They have also announced a hometown headline show upstairs at Whelan’s in Dublin on 7th October 2021. (Julia Mason)

Why we love it: The Altered Hours ‘Radiant Wound’ is a maelstrom of psychedelic rock, gaze and grunge, infused with rage and rebellion. Enveloping swirling caustic guitars cycle with flecks of Ride and early Spiritualized. It’s an impressive slab of noise guided by the longing of a double-barrel vocal refrain of “city I love/city I hate”.

This tear-stained dichotomy is born from the frustration of watching living costs soar in their beloved hometown of Cork. The track is a gut reaction to the current housing crisis in Ireland. Sharing a little more, Cathal explain: “The message with this track is simple, we love the city that has had such an impact on us as a band. The music scene in Cork city has inspired us & supported us over the years & having already lived through one recession here and now with the current housing crisis ongoing, Radiant Wound is a shared rage we feel towards these growing issues. It’s one from the guts.” (Bill Cummings)

Soft Focus – Easy For Me

Why we love it: Soft Focus is the moniker of Yorkshire-based multi-instrumentalist and producer Bianca Eddleston – her debut track ‘Easy for Me’. Co-produced alongside Bill Ryder Jones, the track also marks the first release for Carrie – a new label from the team behind GigList that aims to elevate and celebrate female musicians, producers, and female-presenting voices.

‘Easy for Me’ takes inspiration from Fleetwood Mac and Elton John, but is swathed in a gorgeously shimmering, psych-pop tint that recalls early 80s pop. Bianca Eddleston’s soulful and distinctive vocals have a touch of mid-period Madonna about them and a infectious bittersweet chorus pouring forth over this subtlety drawn production swathed in synths, glossy guitar lines and blinking beats.

“‘Easy For Me’ is a phrase many friends have said to me when I’ve moaned about something in my life, like ‘Oh B, it must be easy for you,’” says Bianca of one of the track’s themes. “It’s the way I was raised too, if anything went wrong for me my mum would say ‘just think of such and such they have it so much harder than you’. It made me not trust my own emotions, I’m still learning to do that even now.” (Bill Cummings)

Why we love it: Hailing from Croydon, we’re featuring the 19-year-old artist gglum – moniker of Ella Smoker. Subtle, evocative and introspective, her new single ‘glad ur gone’ was written at the end of a very turbulent long-term relationship. Layered and haunting vocals swathe this tapestry of beats that punctuate with bedroom R’n’B-pop stylings, the reflective vocal hook including the kiss of “I’m so glad your gone” detailing the closure of a break up with someone who hadn’t treated her well.

She says: “The song was written once I was able to take a step back and look at it from a clearer perspective. Writing the song felt like closure to the whole situation and was when I realised that I was better off after the relationship had ended.” Intoxicating. (Bill Cummings)