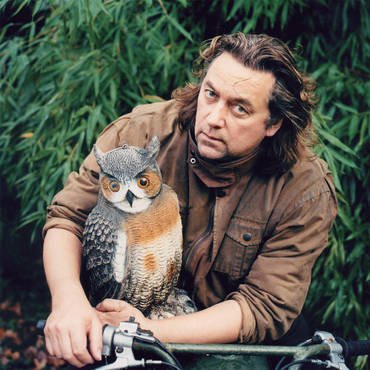 The term ‘cult artist’ can be fraught with difficulty. Is it nothing more than a cliché, randomly applied, so that those too cool for school may take ownership and ringfence what they perceive as theirs and shut others out? Or is it just music that is too difficult to appeal to a wider audience? Or is it a label applied to stuff that should be more successful, that for whatever reason hasn’t been… so far?

Scottish singer-songwriter Jackie Leven certainly has his admirers, including writer Ian Rankin who collaborated with him and made his troubled cop Rebus a fan, as well as musicians as different as Glen Matlock and James Yorkston. This is an introduction to Leven, who tragically passed away from cancer in 2011, and with over thirty albums to pick from over his forty year-plus musical career, it’s one to whet the appetite – and for those in the know to nod with satisfaction and say ‘told ya.’ (Even if they do go on to criticise the tracklisting and say they would have done it much better.)

First off, it’s not just his undoubted skill at songwriting – of which more very soon – but that voice, treading a line between soulful without being too gruff or too slick, a voice that’s rich without being overpowering, showing his Scottish roots without overdoing it or. Of course, it’s frustrating when people with great voices are doing material that’s a letdown, but here he has his own, fine material.

The album opens with the wonderfully titled ‘The Sexual Loneliness Of Jesus Christ.’ This eighties-tinged track was produced by none other than Pere Ubu’s David Thomas. While it’s not too much of a stretch to see radio programmers getting angsty about that title, the song is brilliantly conceived and executed; within its’ lines Jesus is shown not as a pure and sinless messiah but as a sexually frustrated, solitary man condemned to an existential loneliness no one else will ever experience.

It’s not only that songs that draws the new listener in – but so many others : ‘Irresistible Romance’ is like a celtic Hall & Oates, it even incorporates a nod to ‘Scotland The Brave’ and cleverly fades out before it can get twee. It’s the cinematic brilliance, lyrically and musically of the atmospheric and evocative ‘Snow In Central Park’ that adds so many details and flourishes – but, crucially, never feels overbaked.

Often pigeonholed as a folk artist, the song ‘Poortoun’ is perhaps the only track on this compilation completely in that idiom, evoking a small Scottish town where a mother grieves for the protagonist’s brother who died from heroin, while the singer loses himself in drink. Again, it’s not a ‘woe is me’ piece but a rather a measured reflection.

Being ten tracks and forty-five minutes long, it’s like the old days when you could aim to put together a selection for one side of a tape for your Walkman (oh, ask yer Gran!). .Kudos is due to Michael Kasparis from Night School who was so moved by the songs, he decided to release this record as a way of introducing new people to Leven’s songbook. This is an ideal easing in to a back catalogue that may seem as labyrinthine as that of The Fall, but like one of Leven’s songs, it brings in the listener without smothering them. Crucially, it should open up this revered, if under-appreciated artist to a wider audience.