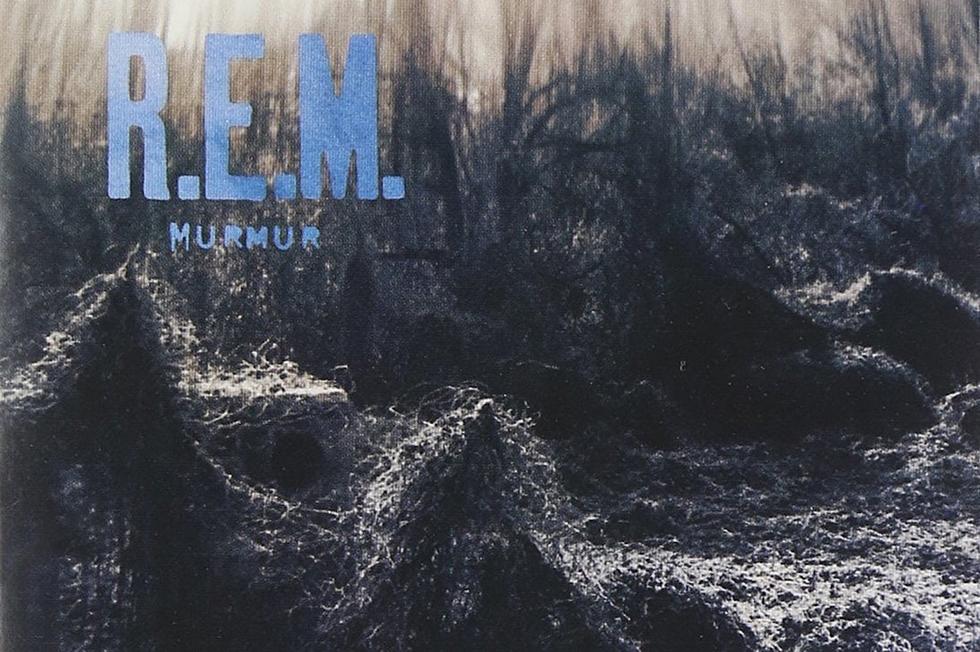 The debut LP from Athens, Georgia, U.S.A natives R.E.M. came out when I wasn’t quite 2 years old, in April 1983. Therefore I am coming at this record with relatively new ears. I wasn’t there at the beginning, I wasn’t even there in the ’90s when they exploded globally with what arguably remains their biggest singles, ‘Losing My Religion‘ and ‘Shiny Happy People‘, the planet straddling albums Out of Time and Automatic for the People and their ascendancy into rock royalty. 1991 and 92 were just a bit too early for me but I was introduced to them properly with the Monster album and, in my opinion, one of their best singles ‘What’s The Frequency, Kenneth‘.

For this week of celebration of forty years of R.E.M., I naturally started at the beginning, not least in preparation for the podcasts we recorded, and I find myself immediately drawn to their debut, Murmur. At least at first, it was because it didn’t immediately sound like R.E.M. There is a preconception about that sound, Michael Stipe’s vocal, the jangly 12 string Rickenbacker of Peter Buck, Mike Mills tight bass and unmistakable harmonies and Bill Berry’s lynchpin drums. Or maybe the mandolin on their biggest single.

But as soon as ‘Radio Free Europe‘ slaps you round the chops, it’s a new wave mixed with New York post punk blitzkrieg. It had the no nonsense, no frills of the Ramones too, the lack of pretentious guitar solos, but with a sophisticated air of perhaps the art school attitude and arrogance that maybe makes this era, the very early R.E.M. days, the most interesting.

Despite ‘Radio Free Europe‘ having been released two years before in 1981, there is a wonderful embryonic innocence to the record, that belies the rock behemoths they become over a decade later. Perhaps what makes Murmur ahead of its successors is that they used those two years to build an arsenal of songs that bled into their second LP Reckoning, and indeed arguably it was those that originally didn’t make the cut for Murmur.

It could be because we now know what happened to them, that Murmur is such a time capsule of a band that just wanted to release a record, that was young and doing this because they had to.

From the opening strains of what sounds like a digeridoo, ‘Radio Free Europe‘, still has the fresh out the box urgency and thrill that the footage of them performing on David Letterman nearly 40 years ago bristles with.

‘Laughing‘ is a gentle strum through a bit of Americana, a bit Eagles twelve string acoustic, a bit Brian Ferry delivery.

‘Talk About the Passion‘ is probably the most Byrds-like composition with picked arpeggios in the verses and trebly hooks in the chorus. Stipe is in a muted mood, lower pitched vocals, they are almost tired and stretched at points but this adds weight with the sombre strings as it fades out.

‘Moral Kiosk‘ has a surfer bending riff that is almost laid back if it weren’t for Berry’s rapid Steven Morris-like drums and Mills providing the melodic lines on the bass.

‘Perfect Circle‘ is the most melancholic they go but it is a clear picture as to where they eventually headed with ‘Everybody Hurts‘ and ‘Nightswimming‘ nearly a decade later. The harpsichord holds everything together and echo-heavy snare drum gives a live feel as if it were recorded in a cavernous chamber.

‘Catapult‘ spits out of the speakers after you flip the record and is the mix of folk, summery jangly guitars and the jagged post punk guitars personified. It also has the middle 8 that they purposefully place to replace an indulgent guitar solo, abandoning typical rock tropes.

‘Sitting Still‘ could be argued to be the song that has their influences firmly fixed on their sleeves, with a riff almost directly out of the Roger McGuinn songbook. But it has enough of its own character and quirks to stand on its own.

‘9-9‘ is so angular it struggles to stay upright and at any second you think it’s going to tumble over. Wilko Johnson spiky guitars bouncing around, sudden harmonics and jangly arpeggios as scatter gun drums tries to keep up but is more than ably assisted by Mills bass underpinning it as much through necessity than anything else.

‘Shaking Through‘ does just that with the most Beatles‘ heavy melodies that rattle along like a Squeeze hit.

‘We Walk‘ is perhaps a little throwaway, but this seems intentional, as most things they did, with a wry smile and a nod to an old housemate who would say the refrain “up the stairs, to the landing, up the stairs, into the hall” and there apparently was a Marat painting above the bath.

‘West of the Fields‘ is soaked in Greek mythology but is also one of the most post punk songs on the album. There is a story that Peter Buck wrote it about when Michael went and lived on the streets of New Orleans in the rough Elysian Fields Avenue area, with the French Quarter west of the avenue.

To think, this is where it all began for such a humongous world wide juggernaut of a band. They are fresh faced and keen as mustard, the world has not wearied them, continent hopping touring hasn’t battered their spirits. This is a band that will go on to greater things than they can possibly imagine at this point.