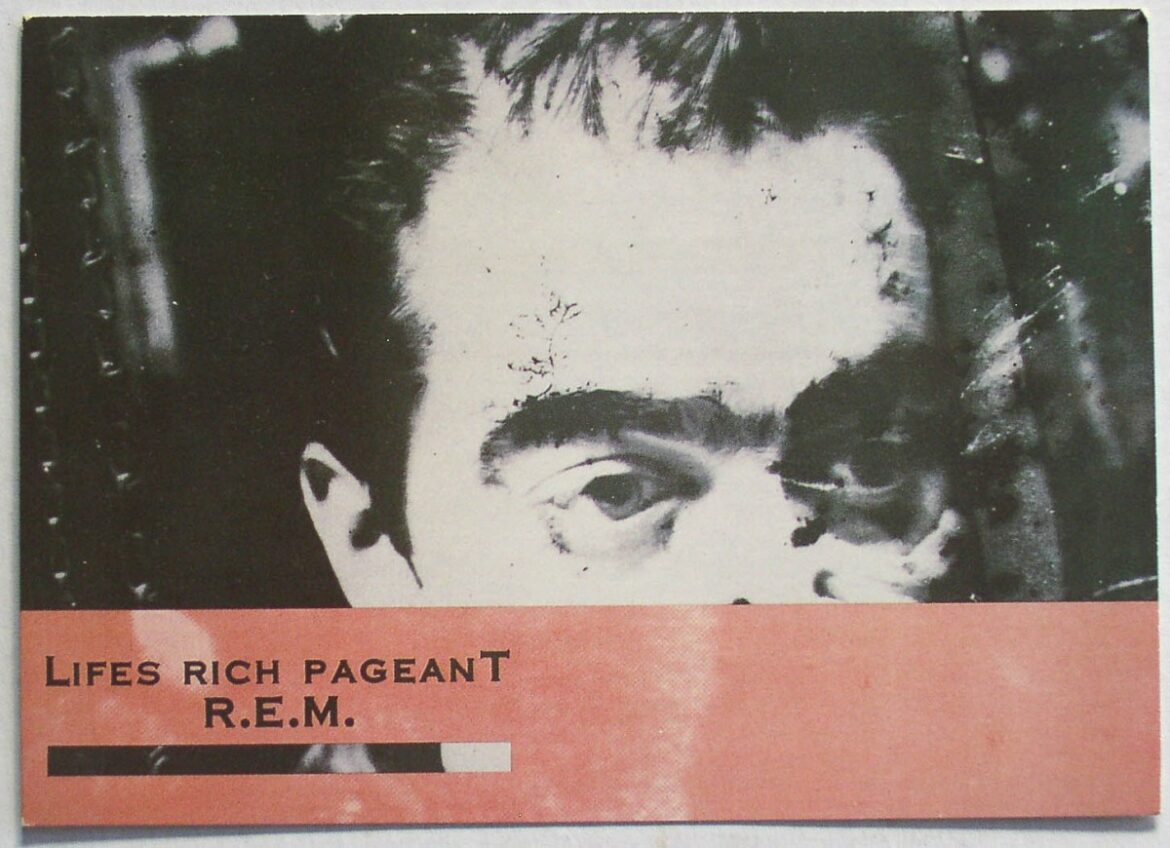 Following a stunning, spooky and uplifting debut in 1983, R.E.M. began channelling their natural ability to write melodies into full bodied and direct singles such as ‘Harborcoat’ and ‘Driver 8’.  Michael Stipe was transforming his approach, experimenting with buoyant vocal runs and singing with as much as 40% energy (which in his hands is a lot).  While R.E.M. refashioned themselves considerably across their first three records they remained true to their core sound, particularly their tendency to flit between very different, almost opposing ideas within the same song.  This brings us to 1986’s Lifes Rich Pageant, their fourth and (in my humble opinion) finest album.

The deeply political opening track ‘Begin The Begin’ highlights society’s tendency to turn a blind eye to great injustices in return for the easy comforts of unchecked capitalism.  Stipe’s brutal assessment of modern America is that it would make the ruthless colonialists who occupied the country and decimated the native population in the 16th century proud.  “Silence means security, silence means approval”.  The song has the warmth of early R.E.M. but the dauntless delivery of Peter Buck’s fuzzy guitars and Bill Berry’s thwacking drums soften you up for an album that is going to be anything but relaxing.  This is before they bulldoze you with ‘These Days’ – a tight, fast tempo track which rides the line perfectly between hopefulness and simmering aggression.  At this point Stipe is well above 40% energy, his performance fizzes and growls and the band go wild with perfectly sequenced, bountiful melodies.  You can hear how much fun they are having, luxuriating in having mastered their craft.

‘Fall On Me’ has a balance of jangling guitar, end of the fretboard bass and yearning vocals which fall in love in an enchanting mid-tempo.  Like their later album Green they are ahead of the public conversation by fore-fronting a strong environmental message.  “Buy the sky and sell the sky and bleed the sky and tell the sky – don’t fall on me”.  The song moves from anthemic and caring in the verses to cathartic and regretful in the choruses.  ‘Cuyahoga’ is another call to action to remould America but has a much more optimistic take on the theme.  The band take their time with a gorgeous, expansive groove leaving plenty of space in the song which periodically gets used up with punch the air choruses.  This positivity is channelled into more of a rollicking, fast moving adventure in ‘Hyena’, the drumming is simple, yet perfect and refined in how it leads the band from section to section.  I love the rush of the key change in the chorus.

R.E.M. then throw you a curveball.  A salsa style, cold war era song ‘Underneath The Bunker’, the lyrics of which seem ready made for the pandemic.  Incidentally in March 2020 Stipe shared a new performance of the track on social media with the words, “I’m bunkering at home. I’m sheltering at home. I’m keeping apart. We’re together, separate. Together, separate… For each other’s goods.”  In the context of the album it’s a brief interlude which jolts you to attention.  It couldn’t be more different from the touching, tracing paper thin detail of ‘The Flowers Of Guatemala’ which would convince anyone in any doubt that they were the same band who wrote Murmur, the main stylistic difference being the gorgeous guitar solo in the last third of the track.  The verses are so bare that when they gently strum the steel string it feels as if the whole song lifts off.

I’m in awe of the nostalgia and passion that shoots from ‘I Believe’.  More than any other song on the album it feels desperate to burst from the band like it has occurred to them as one continuous thought.  I can hardly believe it’s 4 minutes long given how it comes across as a seamless, ceaseless, unbroken whole.  It confidently leads into the itchy, cool and collected ‘What If We Give It Away?’ which delights in the resonance of its strumming and fingerpicking, letting each note bleed out.  The sequencing of this album is phenomenal, with this then leading into another accomplished, fast moving and dramatic number in ‘Just A Touch’ where Stipe lets loose making random noises, backed by flamboyant piano runs and crunching guitars.  Mike Mills’ thudding bass here is playful and unignorable.

The band closes with a couple of iconic tracks, starting with the ballad ‘Swan Swan H’ which forecasts a distinctive finger picking style from Buck which would go on to penetrate the public consciousness in the 90s.  It is grand and important.  Lastly we have a sped up cover of The Clique’s 1960s underground psych-rock track ‘Superman’.  Bizarrely Mills takes over on lead vocals here with Stipe providing a harmonic counterpoint to his passionate and enthusiastic performance.  The bass playing is elaborate and infectious.  It is a wonderful, positive, life affirming way to finish an album, making you feel anything is possible.

35 years later Lifes Rich Pageant clearly stands out to me in R.E.M.’s wonderful, mammoth discography yet it feels like an undiscovered gem when so much conversation revolves around the (also outstanding) Automatic For The People, Document and Murmur. If it’s been a while since you’ve heard this album, or perhaps you’ve gravitated towards other releases I would encourage you to stick it on and bask in its brilliance.