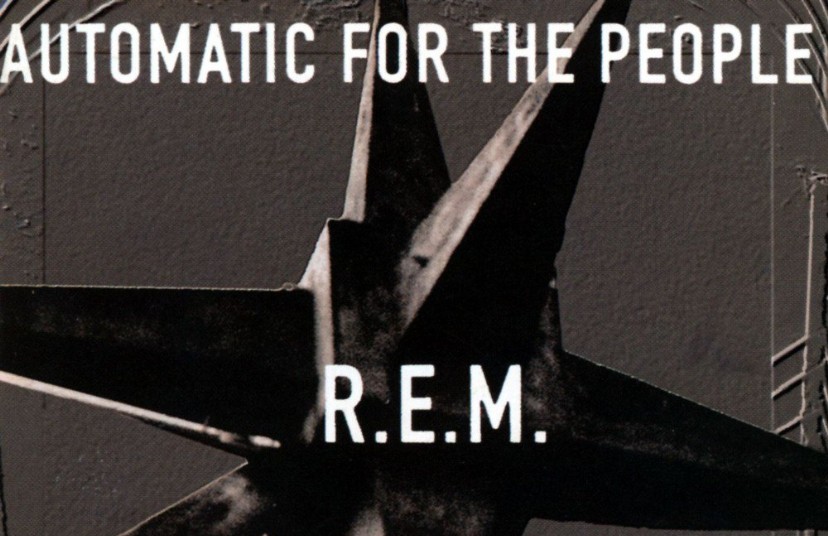 ‘Snap! Crack! Bushwhacked/Tie another one to your act, baby’…

Thus begins ‘Drive’: the opening track – and first single from R.E.M.’s eighth album. Even nearly thirty years later, this is still a spine-tingling moment. A dark, noir-ish thrill as you jump in for the ride.

For my money, I’ve never bought into some of the supposed divides about R.E.M., that, for instance, you either like the IRS era or the Warners era. Nope, still a fantastic run of albums regardless of the label. It could be to do with the age I was when the album came out – a month or so off being sixteen. I had been alerted to REM with the release of the previous album Out Of Time approximately eighteen months previously. So while I hadn’t been following them since the release of Murmur, nor was it as if I excavated the band’s back catalogue after they had split up, negotiating the albums with the internet at my fingertips guiding me in a ranking of their albums from worst to best or being able to read retrospective and recent reviews at the flick of a switch. I started to work backwards with REM, aware of how they’d changed and developed. When they released the next album Monster I remember many schoolmates being thrown because it seemed such an abrupt change, unaware of earlier albums.

Ironically, Automatic For The People was planned as a very different album. With the band electing not to tour the Out Of Time album, they began recording demos for what would become Automatic while still mixing Out Of Time, with demos for ‘Drive,’ ‘Nightswimming’ and ‘Try Not To Breathe’ recorded in December 1990. The intention had been to make a more ‘rock’ record than it’s predecessor, but they only came up with half a dozen songs in that vein, with only three songs on the finished album that might come close to meeting that description, ‘The Sidewinder Sleeps Tonight,’ ‘Man On The Moon’ and ‘Ignoreland,’ three titles, two singles among them that show it’s not as much of an acoustic album as your memory might tell you.

The three instrumentalists of the band – Peter Buck, Mike Mills and Bill Berry worked on demos for the rest of the year, before presenting singer Michael Stipe with the demos at the start of 1992. Over the next six months the album came together at studios across the U.S.A. with string arrangements by John Paul Jones (he of bass-playing Led Zeppelin fame) adding an important touch to ‘Drive,’ ‘Nightswimming,’ ‘Everybody Hurts’ and ‘The Sidewinder Sleeps Tonite.’

Lyrically, and at times musically too, it was far darker album than its predecessor. This would lead to speculation upon its release about Michael Stipe’s health, and there were rumours cited in the press that he had cancer, or AIDS. The death of Freddie Mercury, less than a year before, had shown that no-one was too big a star to be at risk; fortunately in the case of Michael Stipe these turned out to be false. But there were experiences driving the lyrical content, which over the entire album dealt with themes such as mortality, the passage of time, suicide and family.

‘Try Not To Breathe,’ the album’s second track was inspired by the death of Stipe’s grandmother:

‘I can hold my head still with my hands at my knees
These eyes are the eyes of the old, shiver and fold‘

The band were all now in their thirties – now half the age they are now, of course, but I can tell you that you do start to consider where exactly you are going. The American alternative scene that they had grown up a part of had developed and fractured. The Replacements and Husker Du had split. Sonic Youth might now be subverting, ever so slightly, the mainstream, but Nirvana‘s deposing of Michael Jackson at the top of the US album charts showed that anything was possible. It might just prove a journey that would prove too tough for some – but that’s another story.

That was, of course, if you could make out what the lyrics were. The band were successful enough to be making not just the likes of the inkies like NME and Melody Maker, but also Smash Hits, which printed many of the hit songwords of the time in the UK. Regardless of this, ‘The Sidewinder Sleeps Tonite‘ was one of the most misheard lyrics, with much speculation about what Stipe was actually singing. Much as Hendrix was rumoured to be singing ‘scuse me while I kiss this guy,’ it was not exactly clear why Stipe appeared to be singing about calling Jamaica, as opposed to ‘Call me when you try to wake her up.’ While Peter Buck would decide in later years that he thought it was a little lightweight, he pondered whether there might have been a need to lighten the mood a little, though reportedly the track was never played live.

If Out Of Time‘s ‘Shiny Happy People‘ might have been another song that the band were dismissive of, being viewed as their equivalent of ‘Yellow Submarine‘ then the fourth track on the album – and as it happened, the fourth single -‘Everybody Hurts‘ might just possibly be their equivalent of ‘Wonderwall.’ Like that song, it has been played so many times – video viewings on YouTube being ten times greater than that for ‘Sidewinder.’ It’s a straightforward ballad with a simple enough message – ‘no, no, no you’re not alone‘ -that can guarantee success across the the age groups and the ages. Sure, it might be an R.E.M. song that the cognoscenti might turn their noses up at but it’s also extremely effective. It was used in an advert for the Samaritans charity in 1995, and earlier this year closed Channel 4’s groundbreaking AIDS drama It’s A Sin. As songs from the ‘indie/alternative’ spectrum started to both the chart compilers ever more frequently on both sides of the pond. Thirty years later it might be possible to hear it on an easy listening station, but it also reaches for your soul and gives you a cuddle.

So sure, the album had a number of big hits, but there were also the album tracks that bound this beautifully constructed and impeccably sequenced album together. ‘New Orleans Instrumental No.1′ did exactly what it said on the tin, while ‘Sweetness Follows‘ and ‘Monty Got A Raw Deal‘ rate among the darkest songs the band would ever record. ‘Sweetness Follows’ with its opening couplet of ‘Readying to bury your father and your mother
What did you think when you lost another?’ showed that indeed everybody did hurt, sometimes, but that sometimes that sense of isolation might not be achieved by reaching out. The sense of injustice in ‘Monty Got A Raw Deal‘ that suggested things would not be satisfactorily resolved.

Probably the most underrated song on the album is ‘Ignoreland.’ It’s the rockiest song on the album, a reminder of what the album was originally expected to sound like, and the one that points to where the band would go on Monster two years later. It rages about the the state of Republican politics, and a mere five weeks later the previous twelve years of Republican presidents in the US came to an end with the election of Bill Clinton. While it would be stretching it to suggest that the song was hugely important in doing so, it was a sign that things were about to change.

In some ways perhaps the finest part of the record is the final three tracks. The aforementioned ‘Man On the Moon‘ is a tribute to comedian Andy Kaufman, and at the end of the decade it would give the title for the film about Kaufman’s like directed by Miloš Forman, and which would also star Stipe’s friend Courtney Love. ‘Nightswimming‘ is even more sublime and, let’s admit it, beautiful than ‘Everybody Hurts.’ This song about a group of friends who go swimming at night features just Stipe and Mike Mills, the later on piano, with some oboe from Deborah Workman, brought together by john Paul Jones’ arrangement. Certainly this was one of the most popular tracks on the album even before it was released as a single. Finally the album draws to a close with the quest to keep on looking that is ‘Find The River.‘

The release of the album was greeted by almost universal acclaim, and it was absolutely deserved. NME gave the album a full 10/10, while many other publications such as Rolling Stone gave it five stars. The end of year polls that year saw it make the top ten of many publications, reaching no.2 in the NME‘s list (beaten only by Sugar) and no.1 in Melody Maker and Rolling Stone, as well as high in lists from the likes of Q, The Village Voice and Select. It’s critical showing has not dimmed over time, either.

The album was not just critically lauded, but it was also a huge commercial success. To date, it has sold over 18 million copies worldwide. Their second British no.1 album, of seven, it produced six hit singles, of which five made the top forty – only ‘Find The River‘ would miss it of the singles pulled from the album.

Automatic For The People was a big deal on release around our school. Out Of Time was still on the charts (as a cursory glance online confirms). I remember one friend telling me proudly he’d bought the CD on the strength of ‘Drive’ alone. Another friend, trying to buy an unrelated single from me, added ‘I’ll do you a tape of the new R.E.M. album too.’ These comments – which seem so quaint from the vantage point of thirty years later – sum up the time of an album which genuinely feels timeless.

The band didn’t tour this album – we would have to wait until 1995 when they toured Monster. On a swelteringly hot day at the Milton Keynes bowl in July I was there to witness them with a stellar supporting cast of Cranberries, Radiohead and Sleeper. I’d left school just a few weeks before, and whilst nearly passing out from the heat by the end of it (hell, I didn’t have anything to do the next day) it truly felt worth the wait.

Automatic For The People is R.E.M. at the peak of their powers, a decade or so after forming and showing that bands could fill stadia with panache, and top charts with style.