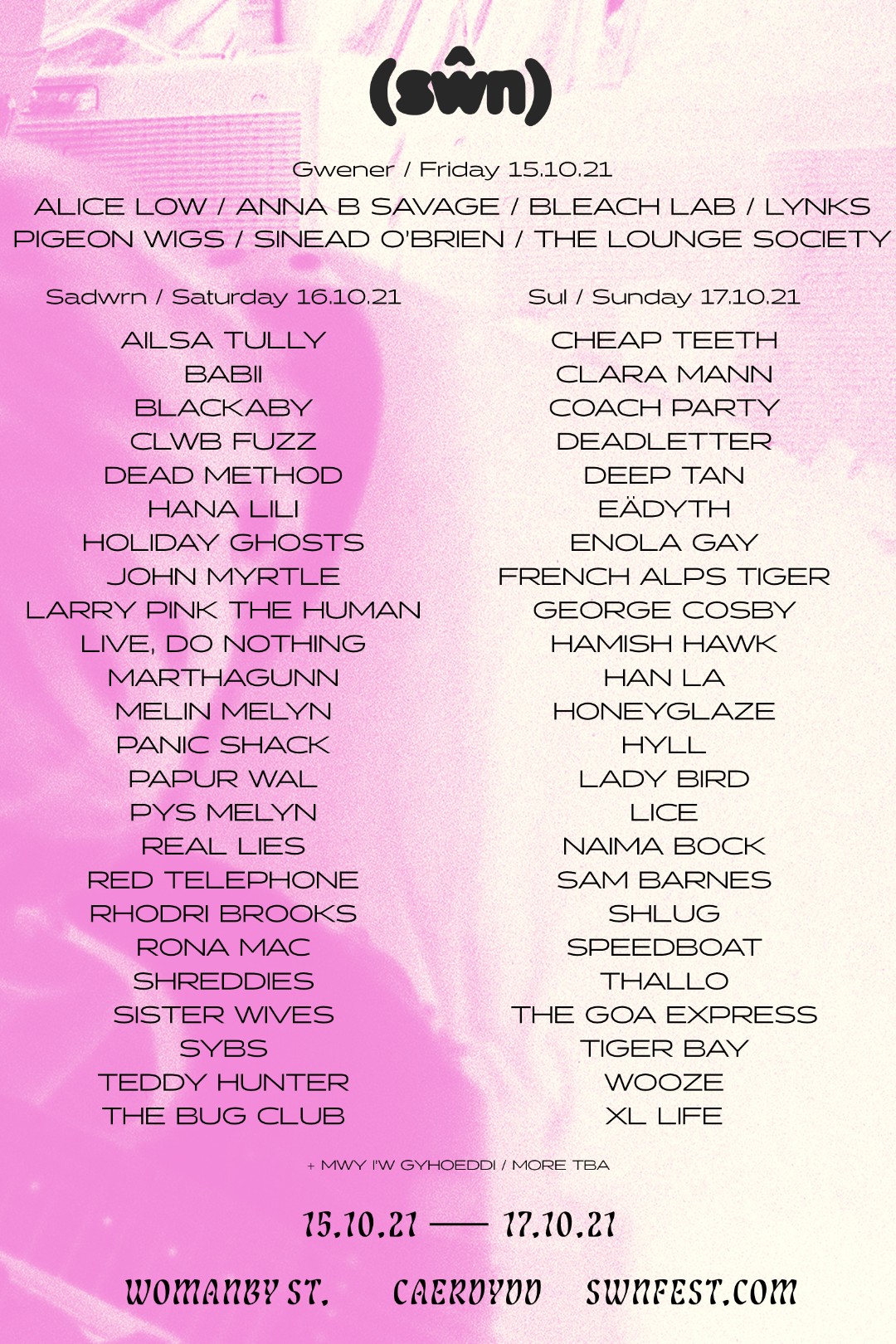 On Friday, Sŵn announced that the festival will be taking place this year. A scaled back version of the inner-city festival will take place entirely on Womanby Street, the heart of Cardiff’s grassroots live music scene between October 15 – 17.

Today, they announce the first wave of artists for the festival. Including Sinead O Brien, Panic Shack, Lynks, Anna B Savage, The Goa Express, The Lounge Society and Coach Party.

“This year’s festival might be scaled back, but we’ll still be keeping to our promise of delivering a weekend jam packed full of exciting new discoveries. Cardiff has missed out on some brilliant new acts due to the lack
of touring and live events, and this year’s line up will be packed with as many of those new gems as we can fit in (as well as some special surprises).” – Adam Williams, Head Of Music.

“Selling out shows across the UK, and tipped by tastemakers and even Elton John, Lynks (formerly known as Lynks Afrikka) is proving to be a force to be reckoned with, Lynks is ready to take over and destroy anything that gets in their way.

Anna B Savage is one of names on the line-up that have been creeping up more and more over the past year. She composes captivating pop melodies full of charm while covering introspective themes with dark and transparent lyricism.

After spending the last few years proving what an astounding wordsmith she truly is, Limerick’s poetic upstart, Sinead O’Brien will return to Cardiff, bringing her gripping lyric-focussed post-punk with her.

You will get the chance to step into the immersive world of BABii – a multi-disciplinary electronic artist, exploring the sounds of synthpop, electro, R&B and industrial music. A forward-thinking artist, with a truly unique and ambitious sound.
The new hotly tipped Enola Gay bring their aggressive and politically charged noise rock to the capital.

Since recording and releasing a single via the prolific Speedy Wunderground in 2020, the West Yorkshire post-punk outfit, The Lounge Society have blown up – we look forward to finally catching their intense and furious energy live onstage. The rich local scene will continue to have a strong presence at the festival.

XL Life arrived with an almighty bang in 2020 with their hardcore power punk noise, a sound sculpted perfectly for the live experience.

After releasing an EP in August with a sold out Clwb Ifor Bach show to back it, Hyll are ready to steal more hearts this October with their charming mix of sensitive and humorous indie rock.

Panic Shack debuted their live show not long before their first appearance at Sŵn in 2019, and have since grown to be one of the most exciting acts in Wales, ready to take over the world with their upfront, uplifting punk.

Teddy Hunter will bring her ethereal soundscapes and electronic compositions to Sŵn after winning this year’s Green Man Rising competition.

Alice Low created a splash in May this year after releasing her genre-bending debut single, ‘Ladydaddy’ that takes you on a 14-minute roller coaster pop journey. Alice and her band are yet to play a live show, but if her adventurous debut is anything to go by, we’re in for an intense ride.

Another big Cardiff promise that are yet to make their live debut, Pigeon Wigs will be bringing their charismatic vintage spells to life. Tickets go on sale today at 12:00 (Monday, August 16)”