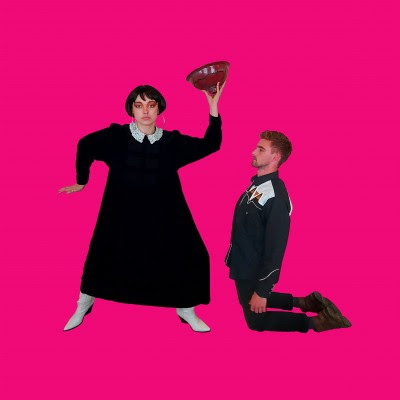 One of God Is In The TV’s ones to watch in 2021, Tacsidermi have returned with the sublime new single ‘Ble Pierre‘ coated in woozy instrumental loops and dreamy refrains: evocative of never-ending, carefree summers and romantic escape and wonder.

A quick google suggests ‘Ble Pierre’ translate as ‘Wheat stone’, which adds to the feeling of countryside and landscapes elicited by this record.The dappling Hammond organs and lalloping percussion provided Davey Newington (Boy Azooga) on drums and aided mixing by Matthew Evans of KEYS, the duo forge an elegant marriage of French and Welsh language that has an atmosphere of Stereolab or early Air.

Threaded by Anthony’s effortless and infectious vocal refrains, that are steeped in all the wistfulness and hope of a fading summer sun.  She is joined by Kilgariff’s spoken word in the final portion, perhaps in a tip of the hat to the works of Serge Gainsbourg and Jane Birken. ‘Ble Pierre’ is the soundtrack to the end of the summer, a gorgeous single that holds much promise.