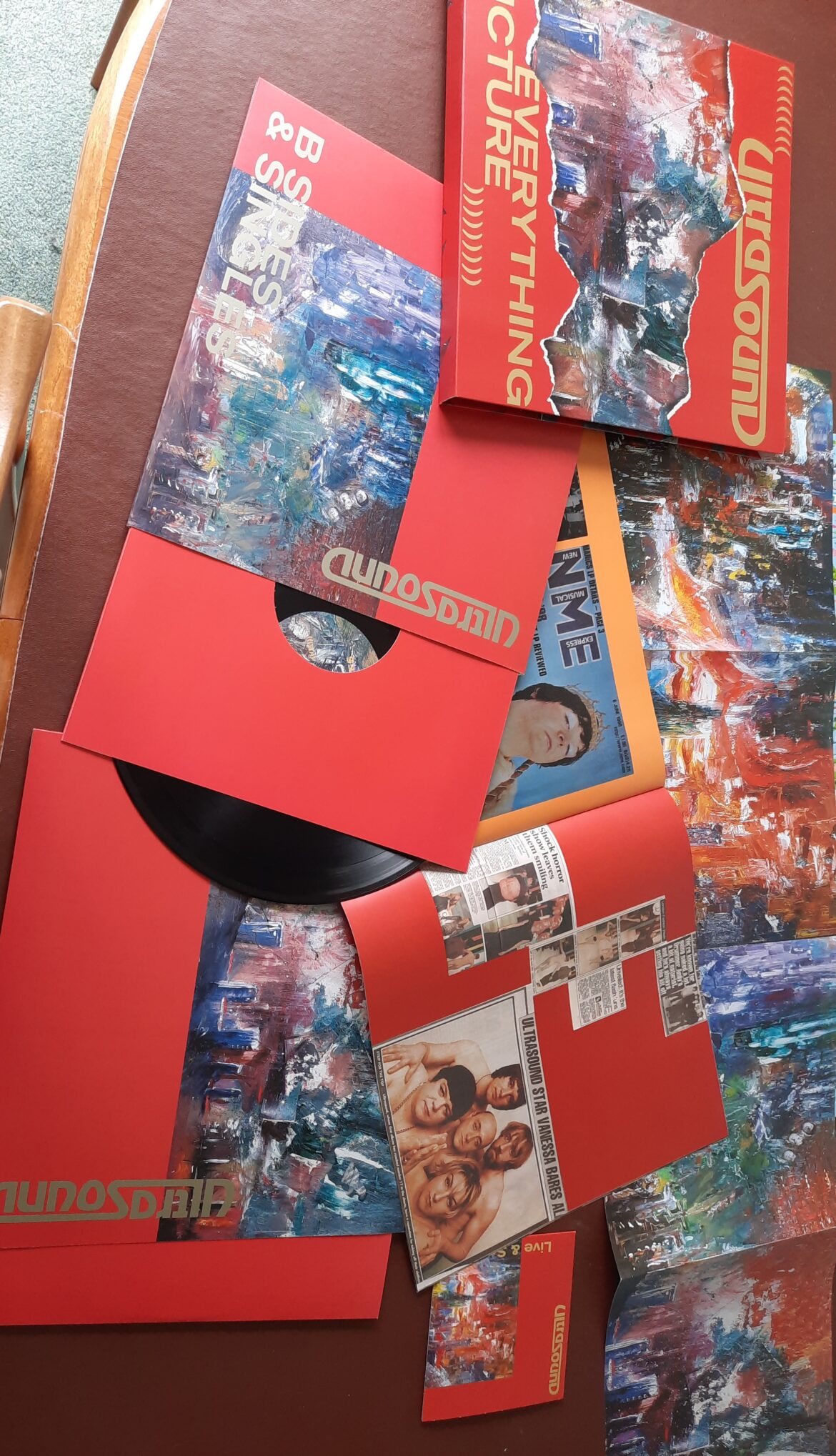 Fuck, this is incredible!

Those of us who actually took notice of Ultrasound back in the day – and there were more of us than you might think – probably were yelling those very 4 words, in unison, within minutes of pressing play, as the gloriously spiky and abrasive ‘Cross My Heart‘ kicks off this remarkable band’s one and only album. Well, up until 2012 anyway.

Never mind back then though. I’m thinking the same 4 words some 22 years after its release, and what’s more, here it is in a box set style that’s so beautiful that it almost makes me want to weep with joy. And no, I haven’t even taken any drugs. Fuck. This is incredible!

It’s no more than Everything Picture deserves, as one of the best albums of the nineties – perhaps even THE best – and is just so perfect that I just…I just have to HOLD it while I listen, like a comfort blanket – a great big, fuzzed up orgasmic racket of a blanket, which I know makes no literal sense, but Ultrasound can do that to your brain, and personally, I LOVE having my brain squidged by them.

In terms of grandeur, it was an incredible risk for a band to release an album whose final, title track clocked in at over 20 minutes. This was at a time when everyone else was making catchy 3 minute pop songs, lest we forget, not massively expansive, almost proggy but somehow heart-rending pieces of epic proportions! Fuck. This is…well, you get the picture.

After you’ve been Tangoed (ask your dad) by ‘Cross My Heart’, the utterly ebullient ‘Same Band‘, like a cross between Wire and Super Furry Animals is so full of uplift that it’s difficult to believe it’s the same band (no pun intended) who will shortly deliver the Edgar Broughton meets Jefferson Airplane marijuana haze of ‘Stay Young‘, a superb composition that also sounds like The Longpigs if they’d chosen to go down the stoner pop route.

At the risk of sounding like a pretentious twat, the one thing that ties all of these songs together is that you feel like you’re swimming in a sparkling lake on a sunny day, in an idyllic land, and the music is the water washing over you, diaphanous at first, but as ‘Suckle‘ proceeds, you realise you’ve drifted out to an unknown place and desperately need to find your way back home.

The shorter ‘Fame Thing‘ despite its unearthly manner, was an obvious choice for a single (but bizarrely wasn’t one) before side one’s closer ‘Happy Times (Are Coming)‘ is awash with pretty harmonies between Vanessa Best (now Wilson) and Andrew ‘Tiny’ Wood that recall Rhoda’s work with The Special AKA on ‘War Crimes‘. It’s truly gorgeous.

‘Aire & Calder‘ begins as though it’s going to be some kind of Summer/Moroder collaboration and then appears to be going into ‘Love Will Tear Us Apart‘ but soon eschews both in favour of something more ‘Blue Oyster Cult in Laurel Canyon’. As with everything else here though, the build up is simply exquisite.

‘Sentimental Song‘ is the most conventional track on Everything Picture and could easily have been the theme to a James Bond movie, single ‘Floodlit World‘ recalls the Manics at their best, and ‘My Impossible Dream‘ is ambitious in its unorthodox arrangement with its use of fuzzy feedback, samples and off kilter loops.

But THAT title track is undoubtedly the piece de resistance, a sad lament indebted to the fifties at the outset, which becomes extravagantly romantic in its lovelorn tale, though when the initial lyrics have been completed, there’s little doubt that Everything Picture takes its cue at this point firmly from Clare Torry’s segment on Pink Floyd‘s ‘The Great Gig In The Sky‘, though here it seems to run from beatific splendour to pain and terror, like we’re witnessing the aural equivalent of some slasher movie. This barely musical portion goes on for a good seven minutes and feels like a descent into Hell while a transistor radio plays barely audibly in the distance, and a feeling of helplessness comes over you. Then we have the sparsity of a lone twanging guitar to see us up to the bitter end.

But that’s not it for this quadruple vinyl boxset. Oh hell no, as we’re led, at the start of vinyl disc three, into the much needed reprieve of ‘Best Wishes‘. Not that this is massively commercial either, despite having been released as a single, but it has singalong bits and is a welcome relief!

Next we’re treated to the ultra catchy ‘Kurt Russell‘, a lovely jangly pop song that was the B-side (WHY?) to ‘Best Wishes‘, on a disc dedicated to flipsides and EP tracks. My personal favourite of these is ‘Over There‘, ramshackle and full of a wilful energy that backed the Fierce Panda version of ‘Floodlit World‘.

‘Football Meat‘ is a more throwaway, punk-pop song but still tremendous fun, ‘I’ll Show You Mine‘ is almost Scott Walker like in its exuberant joy and ‘Underwater Love Story‘ is just, well, lovely.

There are 15 tracks over those two further slabs of vinyl, each one of them more than worth your precious time.

So that must be it then, right? Wrong! As if this BEAST of a box wasn’t already as perfect as it could be, there’s a quite wonderful CD that comes with it, featuring demos, acoustic versions, an incendiary Evening Session for Steve Lamacq of ‘Same Band‘ and incredible live takes from both Reading and Glastonbury. Everything here is next level, though I’m particularly fond of the Glastonbury version of ‘Suckle‘.

Fuck. This is incredible.

Aside from that, there’s a beautiful booklet with band history, lyrics and photographs and a poster to boot. I could go on but come on, JUST LOOK AT IT!!! Well, obviously listen to it as well as grinning inanely,  but LOOK AT IT!!!

Just bear this in mind:  Everything Picture is quite possibly the greatest box set ever put out by anyone, in the history of time. I’m not even joking. It’s PERFECT!